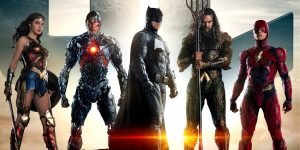 As we continue our 2017 SDCC coverage, check out the first official trailer for the upcoming “Justice League” movie, that has fans wondering, is Superman alive?  According to Deadline:

Talk about intense. The Justice League team dropped a new trailer during Warner Bros’ Comic-Con session; an event that ended with Jason Momoa (Aquaman) becoming so excited, he tossed a chair onstage in the mammoth Hall H and picked up Ezra Miller (The Flash) by the midsection.

“This is how we roll,” Gal Gadot told moderator Chris Hardwick.

In the trailer, a group of assassins enter a building full of school children. Wonder Woman blasts through the door and saves them taking out every single guy. One tries to knock her out, but her head is much harder. Cut to Diana Prince at the Louvre in Paris brushing up a statue. “What did you do this weekend,” asked her assistant. “Oh, nothing very interesting.”

J.K. Simmons’ Commissioner Gordon flashes the Bat Signal to the sky. The trailer sets up that the world is mourning Superman’s death. “These are the age of heroes who will never come again,” announces Wonder Woman in the trailer. Another cool shot shows Aquaman dropping through a building standing on top of a body and then walking out the front door. “Don’t engage this alone, we’re all in this together,” adds Wonder Woman to her super friends. Also seen here is the bad guy from Batman V. Superman, Steppenwolf (Ciarán Hinds), making an appearance, invading Wonder Woman’s femme island and then lording over his own underworld.