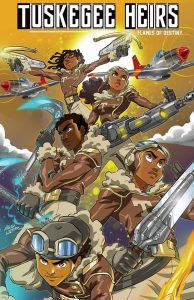 BlackSci-Fi.com continues it’s coverage of San Diego Comic Con (SDCC) 2017 with info on the appearance of the Tuskegee Heirs creative team of Marcus Williams and Greg Burnham. They will have comics, posters, and other Tuskegee Heirs related merchandise on hand.

The team of the popular comic book series will be on hand at SDCC in the Exhibitor Hall at Booth #1235.

From the books website: “Tuskegee Heirs: Flames of Destiny” is a NEW futuristic sci-fi action-adventure comic book series set 80 years into the future that follows a squadron of young, gifted aviators, who are forced to become Earth’s last line of defense against a menacing race of artificially intelligent villains bent on destroying civilization. Trained at the legendary Moton Field, by Col. Mars (our own fictional descendant of the Tuskegee Airmen), these five teens and their crew embody strong moral ethics and team strategies used by the Red Tails themselves to overcome their problems. Follow along as our team travels the globe in an effort to save civilization, exposing little known history and geography along the way. Also…There’s GIANT ROBOTS.”

Visit the creative team at Booth #1235 at SDCC, and head here for more information about the series.