We go see horror movies to take brief, joyful journeys into the macabre. The best horror films help us connect with the characters’ fears, causing us to cringe and squeeze our eyes shut in solidarity.  When the storyline is decent we’re able to lose ourselves in our onscreen heroes as they’re stalked by sinister forces, and even see a bit of ourselves in whomever is salvaged from the carnage in end. Then we leave the theater with the notion that we can soldier against insurmountable odds, that we are salvageable too. Those are just a few of the feelings we get from great horror films. But, this piece is not about those films. This is simply a rundown of what we believe to be the crappiest flicks we’ve seen in the last few decades. 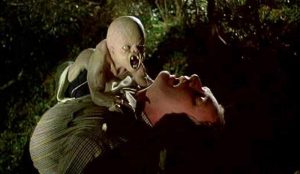 This Larry Cohen movie is about a baby who’s ditched the boob milk in favor of…your face. Yup. This baby wants to eat your face, and other parts of you too. It was bad in 1974, and it’s still bad today. 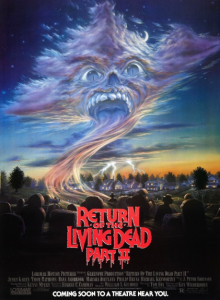 Two horrible things happened in 1988. Crack hit impoverished neighborhoods with devastating effects–and this movie hit the box office. The premise was the same as its predecessor, Night of the Living Dead, but somehow everything about this sequel was worse, from the strangely sexy blue zombie in the beginning to its cover art with that weird thing in the sky that sort of looks like Falcor with mange. Maybe director Dan O’Bannon was just having fun at this point. 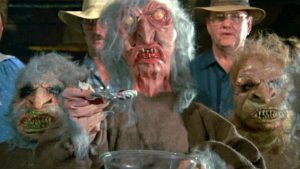 We almost left this one alone, because we weren’t quite sure if Claudio Fragasso meant it to be scary. I mean, it was the ’80s and even concepts for horror flicks were open to wide, colorful interpretations then. But this movie is bad by anyone’s standards. It feels like a weird mashup of Home Alone with pretty much anything from Jim Henson. The only thing that’s truly amazing about the film is that it only cost $200k to make it and we get to troll it for all time–which is priceless.

Besides fact that it’s Halle Berry playing Halle Berry in another Halle Berry movie, it was a decent story, but the casting killed this one. Berry plays the wife of a doctor with a dark secret, which could’ve worked had that doctor not been Charles S. Dutton. The pairing was awkward at worst, and distracting at best. Mathieu Kassovitz should’ve picked better leads. 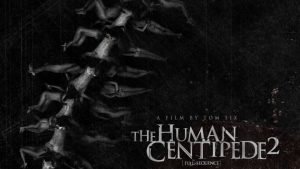 The thing about a discovery that’s shocking and disgusting is that’s it’s only shocking the first time around. The original film, a Dutch import that rocked the internet with about as much force as 2 Girls 1 Cup (Hungry Bitches), was subtitled ‘The First Sequence’ to caution us that there was more to come. Only, no one needs to see it again because we know where it’s going. Fresh actors aside, director Tom Six should’ve quit while he was ahead.