Please note: We’ll be spotlighting five comics a week until we hit fifty.

If any of these comics grab you, actually support the creators who are giving you the diversity you say you want. Not with Facebook likes. With money. That they can maybe pay rent with. Feed their families. Things like that.

Note: All story summaries are from the respective websites for each title. 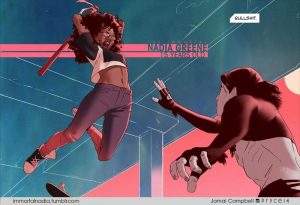 Nadia Greene, armed with her baseball bat and dominant will, beats up death and becomes a little bit immortal. Sort of.

Story and art by Jamal Campbell