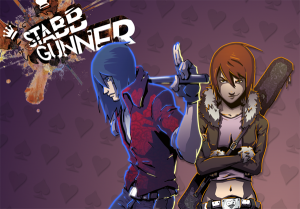 Stabb Gunner is a revenge story that follows two wayward killers, ex-assassin Stabb Fisticuffs and hit girl, Gunner, as they return to their hometown, Scene City, for a final showdown with mayor and crime-lord, Well Dressed Man. But before they can get to him they’ll have fight through the gang riddled streets while dodging Well Dressed Man’s themed Ninja hit squads. Including punk ninjas, rave ninjas and regular ninjas.

The first two issues are also available to read for free on Courtland’s Patreon!