So in honor of the upcoming Women’s History Month (March), we’re going to start this list off with some comics created by some very talented ladies. Without further ado, here we go…

Note: All story summaries are from the respective websites for each title. 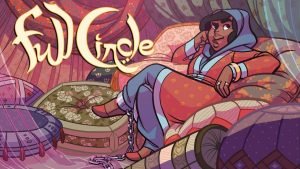 Full Circle is an all-ages fantasy/adventure webcomic that follows Elsa and Rhadi on their adventures through the world of Ves. One wants to go home while the other wants to be anywhere but.