A Champion for Our Youth: Meet Author and Illustrator Jerry Craft
0 Comments

Some may find it surprising that a person who admittedly wasn’t much of a reader in his youth would turn out to be such a fantastic author of children’s books. That is exactly the case with award-winning author and illustrator Jerry Craft. Drawn to drawing (no pun intended) at a young age, Craft credits his environment as an inspiration for becoming a creator. 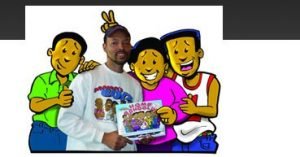 “I was born in the Washington Heights section on New York City, which is the area just above Harlem. I could look out my window and see Yankee Stadium across the river. I had a pretty cool childhood with lots of friends around my block. We were like The Little Rascals. I was never much of a reader back then, but I’ve been drawing since I can remember. I went from stick figure drawings, to tracing pictures from my Marvel Comics, to trying to draw on my own” says Craft.

Though he was a “late bloomer” of sorts when it comes to developing an interest in reading, it doesn’t seem to have limited him in any way creatively. In total, as cited on his website, Craft “…has authored and/or illustrated close to two dozen children’s books. He is also the creator of Mama’s Boyz, an award-winning comic strip that was syndicated by King Features for more than 15 years. His work has appeared in national publications such as Essence Magazine, Ebony, and two Chicken Soup for the Soul books. Jerry has won five African American Literary Awards [and] he recently illustrated his first book for Scholastic called The Zero Degree Zombie Zone, written by Patrik Henry Bass.”

I recently had the chance to catch up with Craft to speak about his work as well as learn more about his latest project, The Offenders: Saving the World by Serving Detention—a book with a message centered on anti-bullying and co-written with his two teenage sons.

“The plot of the book is that five middle-school bullies get super powers, but instead of being really cool like Black Panther or Luke Cage, they end up taking on the characteristics of the kids they pick on. So one boy gains 50 pounds; one gets super skinny; one gets big buck teeth; one gets super smart, but physically very awkward; and the girl who is always calling kids mousey, literally shrinks down to the size of a mouse. Now they have to try to save their school, but now THEY get teased” says Craft about The Offenders.

When asked whether or not the inspiration behind the book was a personal one, Craft says “I have to say I was pretty 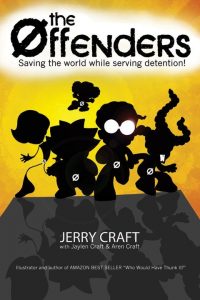 lucky. Even growing up in my neighborhood, and being really little, with light skin and straight hair, I was never picked on. We snapped on each other a lot, but we all knew we were kidding. Never any real fights. The same goes for my two sons, Jaylen and Aren. But I think I felt almost obligated to do a book on bullying because I did so many school visits where that was a problem. But I wasn’t going to write a book about a kid who is constantly being picked on. We did ours from the bullies’ perspective. So I talked to a lot of kids to find out as much as I could. Some kids were jealous. Some were bullied themselves. Some were insecure. And others didn’t consider what they did as bullying because they just thought it was funny.”

As the news continues to bring us stories of children committing suicide due to being bullied, or students being seriously hurt and sometimes even killed due to bullying, it becomes clearer that this topic deserves our utmost attention. Books like Craft’s have the potential to make a difference, as long as they reach our youth in time, and they receive it well. Being that reception is key, I was curious about the reception from students after reading The Offenders.

“The reception has been great. It’s been my fastest selling book ever, and I’ve been publishing books since 1997. I wanted kids to experience empathy, and I think I achieved that. I also have a very diverse cast of characters. The five protagonists include a Latino boy, a Korean boy, two White girls and an African-American boy” says Craft.

I also spoke with Craft about his choice to cater to a younger audience. In an age full of social networks, video games, and texting, some wonder whether children still read books—or even comics for that matter. When asked about his decision to write books for children and adolescents, as well as his decision to cater his comic strip Mama’s Boyz to a younger audience Craft said, “The Mama’s Boyz audience is really strange. Not the kids themselves, of course (smile), but that my books have fans from about 7-years-old to late teens. The humor is like an onion where I try to include different layers. So a really young kid may see a kid getting a tattoo on his or her face as silly, but I make my teen readers realize that they will be stuck with that decision for the rest of their lives. And because of that, I get a lot of parents and teachers who like their kids to read my books.” 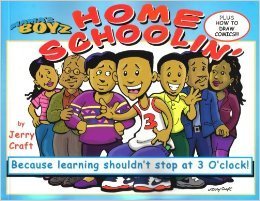 A need for more diversity within all forms of media is another hot social topic we discussed. In an age where representation is very much an essential element in building up our young people, Craft also insists that unity among the actual creators is just as important.

“… I’d like to see a lot more unity among ourselves as creators. As one of the co-founders of the Black Comic Book Festival at the Schomburg in Harlem every January, we have seen that the fans exist. We had an estimated 7,000 people come through this year! That’s amazing. So I would like us to focus on creating newer and better projects instead of using so much energy to tear each other down. If we build our industry together, more of us can succeed independently as opposed to always begging Marvel and DC for a crumb or two.”

Craft makes an excellent point. While being able to showcase one’s work on a large scale is often a goal of any creator—uniting and collaborating with other creators within our own communities is important because it generates strength in numbers and helps build us up—ultimately attracting attention from the larger and more well-known mediums—but more importantly putting communities of color in position to create their own “Marvels”.

“Don’t get me wrong, if you can work with them, and be paid, and respected, that’s amazing. And I would never begrudge someone for having those aspirations. My buddy David Walker is doing awesome things. And I was first in line to pick up a copy of Ta-Nehisi Coates Black Panther. But I feel as though too many of us see that as the beginning and end of the universe. Which is exactly why we have NO mainstream comics at our Schomburg event. And we still get massive crowds. But if Marvel ever had a table, there are definitely those of us who would knock over an Indy publisher’s table in order to be first in line. So we have to retrain our fans’ thinking as well.” 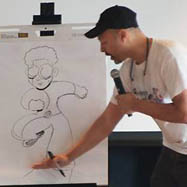 While Craft writes book from the perspective of someone of color- he doesn’t want to limit his fan base to only “children of color”—he strives to create work that anyone can relate to. “When folks look at me like I’ve made it, it still makes me a little uneasy. One of the things I saw when I illustrated The Zero Degree Zombie Zone for Scholastic is how much is kept from us. Authors arrive in buses painted with their characters on it. Hundreds and hundreds of kids line up to get their books signed. Major book events. It was completely eye opening, and made me change my goals. I would like to create characters of color that reach the heights of Wimpy Kid or Percy Jackson or Smile. I would like to make Black characters that even white kids pretend to be. It happens in sports and in music, but the kids publishing industry is still holding on for dear life.”

As for what’s next for Craft, he seems to be leaning toward more light hearted subjects to present to his audience and less of the more serious subjects. “[I’m] currently working on my first full-color graphic novel, but that has had its peaks and valleys. The peaks have been wonderful and amazing, while the valleys have had me on my window ledge. As of now, I have NO idea of the outcome. I’m also working on a few middle grade novels. The industry keeps saying that they want diverse characters doing diverse things, but I’m still seeing way too many books about slavery and civil rights. I don’t think that our kids are ever really exposed to fun stories, they’re always so heavy. It’s sad.”

While Craft thoroughly enjoyed the experience of working together with his sons on The Offenders, he’s not sure they’ll be following in his footsteps as authors and illustrators like himself.

“The experience was great. We’ve always been close. We shoot hoops, play Xbox, watch all the superhero movies… So this was a natural progression. They added a lot of the realism of being a middle schooler today. Especially with the video game references. They are both in high school now, but their contributions were extremely helpful”, Craft said of collaborating with his sons.

When it comes to their futures he continued, “… as far as following in my footsteps goes, I think they’d like to make a lot more money. Which I can’t, and won’t, blame them. Twenty years of publishing books for and about kids of color hasn’t been the most lucrative venture. In my next life I will sell bootleg DVDs of Empire. I’m sure I’ll make a LOT more money.”

You can view all of Craft’s work on his website at www.jerrycraft.net. If you’re interested in ordering a book (or two) the creator says, “Please do it directly from my site as opposed to Amazon where I’m lucky to make a nickel on each sale. Plus I can autograph them. That is the best way to support indie publishers. Also, ask your local library or school library to order them as well. OR bring me in for an author visit. Those things make a HUGE difference.”

Stay up to date with his upcoming appearances and projects through his website—or you can invite him to your local school or library for a visit as well!