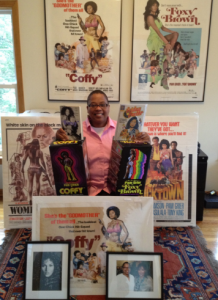 The Museum of UnCut Funk isn’t a traditional brick and mortar display art house. Nope, it’s a virtual presence and traveling exhibition created and curated by Pamela Thomas, aka Sista ToFunky. From the website you’ll be transported to an era of afro’s, bellbottoms and icons. You’ll also find a virtual collection of artifacts that goes beyond the general blaxploitation and represents an era of Black Pride and purposefulness.

Before we delve too deep into the Museum of UnCut Funk lets step back to October of last year. Sometimes you meet someone or go some place and your perspective gets skewed. For me this happened at New York Comic Con 2015, the biggest comic book convention on the East Coast. I was inundated with vendors hawking their goods and folks making moves. I was starting to go a bit numb, and trying to fight through it to get to the good stuff and found myself losing sight of the real gems. That was the case when I first met Sista ToFunky.

She was at the convention representing the Museum at the AfroFutureFest booth. I was so caught up in the madness of Comic Con that my mind couldn’t connect the dots of funkyness in front of me. Luckily the Funk smiled down on me and gave me a do-over in this assignment to speak with Sista ToFunky about the Museum, its history, its mission and its future.

The Museum’s origin starts with Thomas’s former art gallery in Summit, New Jersey, which was affected by the events of September 11th. When the clientele didn’t come back, the gallery had to be creative in transitioning to its next phase. Taking stock and cataloging the art on hand, an interesting collection of contemporary art with a significant portion consisting of animation from Disney and Warner Brothers, she wondered “where are the black cartoons?”

From there they expanded their collecting efforts to include original animated cels, movie posters, books and coins,

anything that involved the black perspective with a strong emphasis on the 70s. According to Sista ToFunky, “We’d gone from the 1960s, coming out of the Civil Rights Movement and going into the 70s, where this is really the first time where Black folks were empowered in the movies, TV and fashion,” Thomas said.

“Our own personal identification, whether it was just afros or the way we carried ourselves with a certain pride, it was only in the 70’s that you have this explosion of Blackness and then it disappeared.”

With the cartoons it was important to Thomas to showcase these groundbreaking, positive and uplifting characters of various backgrounds and races because, “One of the messages that we wanted to get out was that this wasn’t just about having kids sit in front of a television eating cereal on a Saturday as much as the history that was being done in animation for the first time, and we were very excited to be the one to tell the story,” Thomas explained.

Currently the Museum’s traveling exhibit Funky Turns 40 is at the Pensacola Museum Of Art, in Pensacola, FL (February 23 – April 9). From there it will make stops at the Black History Museum And Cultural Center Of Virginia in Richmond, VA (May 5 – August 2) and then close out at the John G. Riley Center / Museum in Tallahassee, Florida (September 1 – October 31). In speaking about the future of the Museum, Thomas stated that along with some printing of collections on the horizon, she would be willing to create a new Funky Turns 40 exhibition for the Smithsonian’s National Museum of African American History and Culture. As Sista ToFunky said “As much as any museum, that one in particular would be the icing on the cake,” should they reach out.

To learn more and support these children of the 70’s, their museum, and exhibition schedule visit museumofuncutfunk.com.