A Conversation with Ashlee Blackwell of Graveyard Shift Sisters
0 Comments

When most people think of horror, names such as Stephen King, Wes Craven, Anne Rice, or Alfred Hitchcock are some of the main people who come to mind. Rarely if ever is there acknowledgement of the contributions to the genre from people of color. Even rarer is an acknowledgement of women of color.  To any sensible horror fan, however, it should seem unfair to ignore the cultural and creative contributions women of color have brought and continue to bring to the genre.

You see, people of color are not new to themes that are horrific in nature– it is in our blood to share our stories in ways that emphasize the very real terrors we have endured and continue to endure as a culture, in order to spawn conversation and promote healing within our communities.  The fact of the matter is stories are at the core of the human experience, they are crucial to every global society—even the scary ones.

story derived from the experiences and imagination of horror creators worldwide.  Honestly, there isn’t much that is more horrific than the stories of an entire population of people who were “snatched away” from their homeland by strangers. They were murdered, tormented, abused, enslaved, and continuously oppressed for hundreds of years in a foreign land—due to a seemingly unending cycle of hatred toward them based on only the color of their skin.

The recent #oscarssowhite controversy highlights even further the need for people of color to develop our own platforms in an effort to recognize and encourage talent within our communities—because oftentimes we can’t rely on the rest of the world to do it for us.  There aren’t many who understand this need more so than Ashlee Blackwell, Blogger, Founder & Editor of Graveyard Shift Sisters, “…a blog that works to highlight and celebrate the experiences, representations, achievements, and creative works of Black women and women of color in the horror (and science fiction) genres.”

I recently had the pleasure of chatting with Ashlee about her work on Graveyard Shift Sisters, and get some insight into her passion for horror and the creators within the genre as a whole.  Like many other fans, Ashlee’s love for horror started early on in life.

Tiara Jante: How did you become interested in horror?

Ashlee Blackwell: The proximity of my mother’s film viewing habits. She didn’t put much thought into actively shielding me from her home video viewings of Hellraiser or Friday the 13th Part 7: The New Blood. And she was totally cool with more family-friendly genre like Beetlejuice. I was around 4 or 5 when I embraced the fact that I liked films like these more than others.

TJ: Who are you greatest influences within the genre?

AB: Initially, the “Final Girls” in horror films. Now, it’s everyone you see highlighted and interviewed on the site. They’re more an inspiration for me to continue. 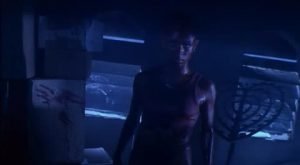 If you’re unfamiliar with the term “Final Girls”, it refers to the last woman standing, who fights off the villain and lives to tell the story in horror films (often slasher flicks). Some notable “Final Girls” of color include: Jada Pinkett-Smith as Jeryline in Demon Knight, Brandy Norwood as Kara in I Still Know What You Did Last Summer and Sanaa Lathan as Alexa in Alien vs. Predator.  It doesn’t end in film, though.  Over the years women of color have notably contributed stories in literary form, and Graveyard Shift Sisters does a great job of providing suggestions for anyone’s reading list. With that said, of course I had to ask.

TJ: What are some of your favorite horror films and literature? Why?

AB: Too many to name and detail! I enjoy all types of horror films for many reasons. As far as literature, I still cling to Horror Noire: Blacks in American Horror Films from the 1890s to Present. It gives a well-rounded historical overview of Black people in the genre.

It’s obvious that Ashlee is not your average “fan girl” when it comes to horror—she immerses herself in all aspects of the culture, and I am impressed with her knowledge and analysis on the creative expressions of women of color in horror.  In our conversation, I was curious to know her thoughts on the current lack of representation of black women in the genre, and her ideas on how women of color can better be reflected in horror culture. 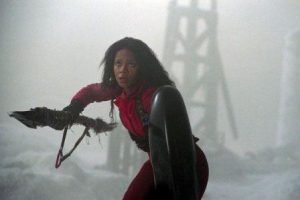 Sanaa Lathan in “Aliens vs. Predators”

TJ: Why do you think the voices of black women and their stories are often hindered within the horror genre?

AB: Really for the same reasons they’re hindered everywhere else in a myriad of spaces. There’s no ‘textbook image’ of a horror fan that in the popular imagination conjures a Black woman. I hope Graveyard Shift Sisters is working to erase this.

TJ: What efforts would you like to see made to allow for more representation of black women in the horror genre?

AB: I loved when actress Viola Davis famously stated, “The only thing that separates women of color from everyone else is opportunity.” It’s as simple as wanting these content creators to receive a fair amount of exposure and jobs where warranted as well as the on-camera talent being seen as capable of being leading ladies as much as their white colleagues.