A Chat with Malice in Ovenland creator Micheline Hess
0 Comments

For the month of April, BlackSci-Fi.com will celebrate kids/ teens, by featuring creators and works who/which are contributing to providing quality, fun, and educational works of art for children and teens.  Our goal is to highlight the continued and past works of these talented individuals as they add to the ever growing intersection of kids/ teens and sci-fi, fantasy, and real world sciences. 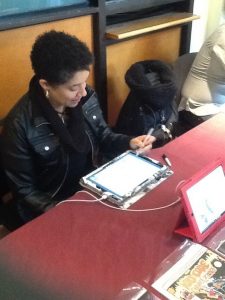 Over the past year or so I’ve had several opportunities to meet and talk with Micheline Hess, writer, artist, instructor and all-around bad-ass. If you haven’t heard her name before, shame on you for not going to more comic conventions.  A graduate of New York’s Parsons School of Design and former colorist for Milestone Media, when she’s not working at her day gig for an ad agency here in New York, she uses her technical know how and background on her zany creator owned stories of diverse young heroes and sheros.

Her comics Malice in Ovenland, The Anansi Boys and the All Saints Day and her children’s book The Island Cats of Cunga Ree, are filled with wonderful characters that reflect her world like Lilly the main character of Malice in Ovenland, who is based off of a friends stepdaughter. You also have the West Indies folklore that infuses the Anansi Boys that was told to her by her mother. Hess’s talents tell stories that her younger self didn’t see and stories the whole family can enjoy.

As a youngster she read comics like most comic creators, but wasn’t fully into the mainstream books of the time. Her closest brush to superheroes comics was DC’s Captain Carrot and the Zoo Crew. She would follow the art form in the guise of manga but wouldn’t use her gifts until after graduating from college and learning about Milestone Media.

“I’d heard about Milestone and what they were doing and I saw the books that were coming out and their mission. It just got me so excited. I was still drawing in my spare time but I wasn’t really doing anything with it so I decided I just had to work for them.” 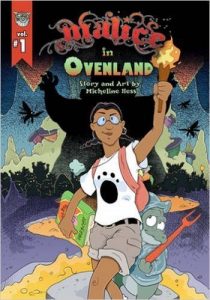 Like Wonder Woman preparing for battle, she assembled her portfolio and made several attempts at getting in the door. It was that resiliency that got her an interview with colorist Jason Scott Jones, who hired her as an assistant colorist. Unfortunately all great things come to an end and such was the case with the first iteration of Milestone.

Afterward she worked a 9-5 saving up money to purchase a 120 megahertz Mac clone, what was the state of the art at the time, and with a dial-up connection and bootleg copies learned Photoshop and Flash. If you remember dial-up connections then you know what a major achievement that was. From this point she started her transition to the digital side of art and with these new skills started working as a digital designer/artist for companies like Disney, Scholastic and Nickelodeon.

But it was about 6 years ago when she came to the point “…where I saw myself at various jobs and I feared for the future, feared that time was passing me by and not getting my work scene and sharing it with people, so I just kind of dove in.” She printed the first issue of Malice in Ovenland and started selling it at ECBACC, which led to her signing with Rosarium Publishing.

For you to be as fortunate as I’ve been this past year, seeing her speak on her experiences as a woman in the comic book industry or sitting in on her instructional class of crafting comics at the Women in Comics Con, go to the Malice in Ovenland Facebook fanpage to learn more about Micheline Hess. To purchase her books go to Comixology, Peep Game Comix and to support her and other independent creators reach the next level of publishing comics, go to Rosarium Fund Raising on IndieGogo. And keep an eye out for her next project Punch Clock Princess, a webcomic whose main character’s imagination runs wild while she’s at work, followed by all the weird and awkward situations you would expect.

Article Topics: Malice in Ovenland | Micheline Hess | The Anansi Boys and the All Saints Day | The Island Cats of Cunga Ree