Is Abbie Mills Back From The Grave In Season 4 of ‘Sleepy Hollow’?
0 Comments 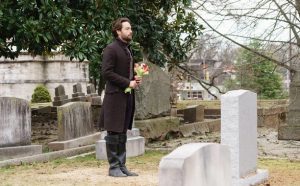 Season 3 of ‘Sleepy Hollow’ ended horribly by pretty much all accounts–and it was all due to the unpopular and ill received killing off of  fan favorite and beloved witness “Abbie Mills”, played by the talented Nicole Beharie. Since the finale, there has been much speculation as to why the writers chose to eliminate such an essential character  from the storyline–resulting in many fans and bloggers deciding that “race” was an issue.  Others speculated that Nicole simply wanted to take on other roles, and therefore, her removal from the show is only temporary.  Well the latter seems to be true…sort of.

According to Nicole Beharie’s and Sleepy Hollow’s IMDB, Abbie will be appearing in the first two episodes of ‘Sleepy Hollow’. Her “occasional”appearance in Season 4 was also confirmed by Executive Producer Clifton Campbell. Now, what remains to be determined is the capacity in which she will appear.  Could it be phantom Abbie, flashback Abbie, or Abbie resurrected?  That we don’t know.  But, based on the initial response from social media, many fans were so devastated by the death of Abbie Mills, they’ve pretty much vowed to never watch another episode. But, if you’re as much of an Abbie Mills fan as I am, you just may want to tune in–at least for the first two episodes to determine whether or not Abbie is truly gone for good. (Personally, I’ll also be tuning in to see Jenny Mills continue to kick some demon ass).

Now, in other news, I am more than excited to see Nicole star alongside Michael Ealy and Jessie Williams in the upcoming remake of the psychological horror ‘Jacob’s Ladder’, set for release in 2017. Reported to be much different from the original, with such a talented cast I can only imagine how epic it will be!

Tiara Janté is a Writer/Digital Journalist who enjoys producing content centered on blerd culture, Sci-Fi & Fantasy, topics pertaining to millennial women of color, and the hip hop culture.  She is a Staff Writer & Social Media Curator for BlackSci-Fi.com, a contributor to xoNecole and a Co-Editor for Black Girl Magic Literary Magazine. She is also the author of the eBook,From Pitches to Bylines: A Few Helpful Tips for Digital Media Professionals,and is presently in the process of completing her debut Sci-Fi novel EXO.  A self-confessed social media junkie with a wealth of opinions, you can connect with her via her Website as well as her Twitter, Facebook & Instagram pages.