I’ve said it before, and I’ll say it again. We’re living in the Golden Age of Indie comics, and creators like Alverne Ball (writer) and Michael Watson (artist) are continuing this trend with the upcoming Zulu web comic series. 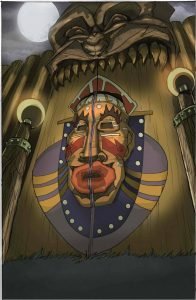 mixed in, Ball and Watson have teamed with Afropunk.com to bring readers a web comic series like no other.

The story tells the tale of a 16 year old Chicago teen, who becomes possessed by the spirit of the famed warrior king Shaka Zulu, and brings his bestowed newfound abilities back to his hometown.

The creative team recently gave BlackSci-Fi.com an exclusive look into what readers can expect from the Zulu series in future months to come

BlackSci-Fi.com: Tell our audience about your new series Zulu? What can readers expect?

Alverne Ball: Zulu is the tale of a teen named Lazarus Jones who becomes possessed by the great warrior king Shaka Zulu during a trip to South Africa and upon returning to Chicago discovers he has these mystical abilities that forces him to become the one thing he never wanted to be…a hero.

Readers can expect some social commentary about the violence in Chicago and one of the reasons of what started this uptake in violence. But readers can also expect a heralding hero’s journey about a kid faced with taking on a tremendous amount of responsibility and what that means not only to his daily life but to a city as a whole.

Michael Watson:  Expect to be taken on a journey, one where you will not know what’s happening until we tell you.

BSF: This has a great connection with African history with the inclusion of Shaka Zulu. Why the connection to this great historical figure for a story of super heroics in present day Chicago?

MW:  Why not? We have all these heroes that are celebrated that are made up and they are champions. Not knocking them because I love them too, but our kids need to see that there are epic heroes within our culture. To believe they can be as brave and epic as these historical figures. Heroes inspire people, and people of color should also be inspired by heroes of color.

AB: For me it kinda just happened that Shaka became the centerpiece to this story.  I’ve always loved the character and when I decided to write my first superhero comic he just came to mind, and I kept thinking there’s all these qualities that makes this real live person feel like a superhero to me.

With that thought I believed I had something that was a bit different in how to portray Shaka as a superhero, but to also keep the truth and myth of the character grounded in a setting that when people reading, whether in cities or in rural communities, could really get a sense that the story was about the human experience and not about the setting or ethnicity of the character.   Plus, Chicago is my hometown and I wanted this story to reflect the city I know from both sides of the track. 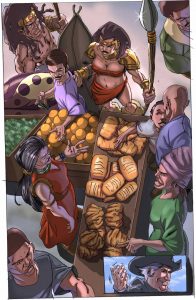 BSF: I remember my Dad recording the Shaka Zulu mini-series on TV and showing me the movie about this iconic figure. I think a lot of our readers have had similar experiences, or grew up learning about Shaka Zulu. How do you feel that people will react to just seeing his name as the title of this story, considering Shaka’s significance?

AB: I hope that the name pulls people in and that they stay for the tale.  Readers will learn sooner than later that this is Lazarus’ story and that Shaka is a character that plays a part in it.  With that said, I’m sure I’ll hear some commentary about my depiction of Shaka and other characters, but I’ll say it now that this is fiction, inspired by a real character and I for one will never disrespect the great king, but I will bring him up to date and inform him of where we as a world of black people now stand.

MW: I think there will be some doubt as to what it is until they pick up the issue. The name will be the pull, but Alverne’s story will keep them. Its not a cash grab. It’s a genuine story that has its own identity outside of the historical figure.

BSF: Mike, what compelled you to join the project from the art side of things? Are there any challenges with the storytelling that you were hoping to tackle?

MW: Alverne is what inspired me; we are liked-minded individuals. We talked at conventions and online, and the guy is driven. I knew working with him on the title it would raise my own level. The challenge is to be a better artist. This is a different type of story for me, it explores a part of a culture that does not get a lot of light in mainstream and its my job to make the art on par with the writing so more people pay attention.

BSF: Alverne, you’ve written superhero stories before, but what would you say sets this apart from other series that you’ve worked on?

AB: This is actually the first superhero comic I ever wrote before going on to write others.  I  think what sets this apart from the other series I’ve done is that this one is grounded more so in a marginalized neighborhood with a marginalized voice looking at a specific threat that is wholly real, internal, and of human origin.

BSF: I’m originally from Chicago, so having a story like this set in my hometown is great to see. The only 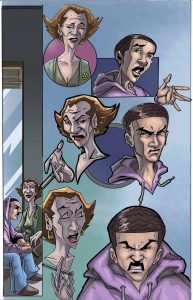 recent series that I’ve seen take on the complexities of the social and racial issues of the city has been the awesome Nighthawk. How important/ crucial was it that you set this series in Chicago? What about the city drew you to set the series here?

MW: It’s important that we see other cities in comics besides New York. Every city has a story and a life and we should see the diversity and complexity in as many as possible.

AB: Chicago is my hometown.  Growing up telling stories I would always say I wish I could see that story occurring in my neighborhood.  When it was time to tell Zulu I wanted to tell something that felt personal and yet familiar to anyone who reads it.

Chicago is now known for its violence, but its always been known for that. There are other sides to Chicago that I wanted to touch on and really show to the world looking in that not all you see in the media is bad. What you do see has a cause and effect to it created by humans.

Click on the link below for page 2 of the interview.