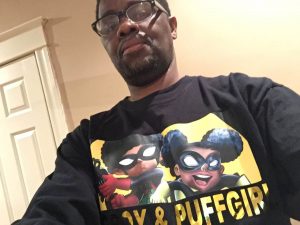 Are we entering an era that seems to be alluding to a future where children of all colors will be equally represented within art, literature and media?  It seems that way—and that is what many creators of color have ever wanted, as they work daily to contribute their talents to a world everyone should feel they’re part of—equally.  One such artist contributing to this particular movement is Reggie Byers, who alongside his wife are founders of the company Kid Build Inc.—the studio behind AFROBOY, the main character in the studio’s upcoming comic book featuring a young black boy “from the hood” who “uses his power to fight the detriments that plague the black community.”

Like many creators within the industry, Byers took an interest in comics and superheroes at an early age. “My favorite comic book as a kid was X-MEN, this was the original team of course, and as I got older I loved Batman and Spiderman.  But I pretty much was into a variety of Marvel and DC comics. As an adult, I started to drift towards the numerous independent comic books” says Byers.

When talking about his own superhero, AFROBOY, Byers explains “The name AFROBOY isn’t original. There’s an AFROBOY app game that exists out of the UK, [and] a professional acquaintance of mine created an AFROBOY parody character that he puts on t-shirts and posters which resembles ASTROBOY. My AFROBOY is distinctive 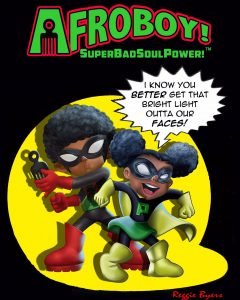 because he’s reminiscent of a Batman type character [and] because he has a little sister “Robin” type side-kick named PUFF-GIRL. So whenever you see mention of “MY” AFROBOY, you’ll either see: “AFROBOY & PUFF-GIRL” or “AFROBOY…SuperBadSoulPower“.”

There is no doubt that when it comes to creating diverse characters it takes vision—and it often takes inspiration provided from personal and outside perspectives.  When speaking about the inspiration behind AFROBOY, Byers says “My inspiration behind this creation is there’s really no positive black superhero character for young black boys to actually relate to and see themselves. Like Captain Marvel (Shazam!), AFROBOY’s powers come from larger than life ancestors…Martin, Malcolm and Mandela. His sister Puff-Girl is a fireball of pure adrenaline. She’s not only sort of the comic relief of the two but we also address the seriousness of ADHD with her, because she has it. The “AFRO” in AFROBOY stands for Achiever, Focused, Respectful and Outstanding.”

“The “PUFF” in PUFF-Girl stands for Positive, Unstoppable, Fabulous Female. The goal of the AFROBOY creation is to instill social skill messages and guidance for our young brothers. It’s meant to be fun and entertaining, but also a memorable and effective resource for boys to refer to regarding, self-esteem, violence prevention, anger management, drug resistance, respect of life—even  what to do when being approached by a police officer. I want every boy to consider himself an AFROBOY, especially if they strive to live up to the four virtues in the acronym of AFRO.”

As to the reception to AFROBOY thus far, Byers says “Even though the comic book is still being worked on, I’ve only 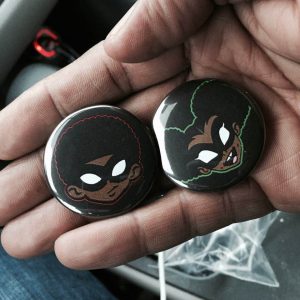 been saturating artwork featuring the characters and producing shirts and buttons with AFROBOY and PUFF-GIRL. The reception has been overwhelmingly supportive! When I wear an AFROBOY shirt out in public, someone always stops me and exclaims “WHO is THAT????” Once the first issue of the comic book is released (July 1) I may launch a Kickstarter to help me to afford releasing consecutive issues on a regular basis.”

Byers is well aware of the struggles faced by black boys living in the hood.  He grew up that kind of environment, and through his work it seems he is striving to inspire black youth to rise above their circumstances and their surroundings. “I’ve lived in Philadelphia pretty much my entire adult life, especially after meeting my wife who was from “West Philadelphia, born and raised”…”I currently live in the West Oak Lane section of Philadelphia. I got my start in comic books by working as an office helper at COMICO, which was located in Norristown, PA back in 1985. After a couple of years working there doing whatever was needed of me (packing comic books, take out the trash, feed the cat), Gerry Giovinco and his partners gave me a position to assist edit their “new talent showcase” comic book, Primer.” 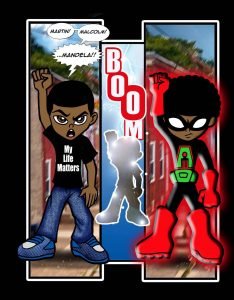 Since his beginnings in such a highly competitive industry, Byers and his wife has opened their own studio, through which they’ve released what Byers says is his “greatest accomplishment”, Kidz of The King.  “Kidz of The King is a Christian themed comic book series that my wife and I produced since 1996. It’s a super team of 10 kids that are actually angels disguised as heroes. It was licensed and created as an animated cartoon on DVD by Peter Parros, a friend of ours, who is an actor on Tyler Perry’s drama series, “The Haves and The Have Nots.” He recently acquired the rights from us and we look forward to him taking what we began to another level to teach youth about Jesus Christ” says Byers.  As far as AFROBOY is concerned, Byers says “It’s definitely my hope to bring AFROBOY to television as an animated cartoon.”

Overall, Byers has high aspirations for added diversity within the industry, acknowledging the changes he’s witnessing and those he’d like to see— “I would like to see more of us employed as creatives at the “Big Two” as well as other major independent publishers.  I also would like to see more licensing happening for the creations of many of my professional peers of color.” He goes on to say about the insertion of meaningful characters of color “It seems to be happening now, and that’s the increase of more black and Latino characters being produced as comic books and in media”—and somehow I think the increase is long overdue. I’m sure many have been waiting for it.”

To learn more about Afroboy and Kid Build Inc. go to www.kidbuild.org or check out his social media at the following: 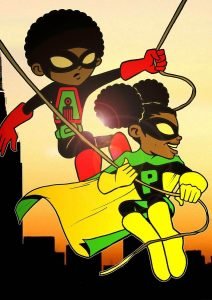 Tiara Janté is a Writer/Journalist, budding Social Media Analyst, and Sci-Fi & Fantasy enthusiast. She is currently in the process of completing her first novel, Merged, a dystopian themed Sci-Fi thriller. You can stay up to date with her work via her blog at: http://www.tiarajante.net/