Andrew Augustin: On Leveling Up
0 Comments 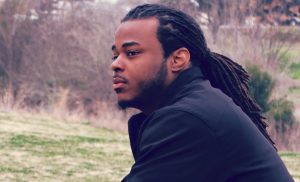 Back in the day, summers spent playing video games with my cousins at my Aunt’s house in the Bronx was a tried and true staple of my childhood. We blazed through the gritty underbelly of a mock NYC in Streets of Rage 2 as the smell of fried fish and Johnny Cakes wafted into the bedroom from the kitchen. Somewhere in the background, Biggie’s hefty chant, “Super Nin-ten-do, Sega Genesis,” seemed an appropriate anthem as we ran through games on both systems: Gunstar Heroes,Turtles in Time, Altered Beast, Super Mario, Sonic, and Street Fighter just to name a few. As a kid, it was easy to become transported to another world entirely just with the push of a button.

Andrew Augustin, a growing entrepreneur out of Austin, Texas, is capturing that same magic of classic cartridge games for a new generation. Citing industry icons like Shigeru Miyamoto and Hideo Kojima as influences, it seemed that he was always interested in video games beyond their recreational value. After he was hired at Edge of Reality as a character designer and world builder for the Sims 3 Pets on Xbox 360 and Playstation 3, Andrew began looking into the video game industry as a viable option for his next move.

“Once there, I felt gaming would be the best move for me since it not only could show my artwork, but it could bring my creations to life with sound, world design and player interaction,” he says.

In 2012, Andrew founded Notion Games, an independent company that’s all about creating fun, interactive 2D gaming. Outside of commissioning two incredible composers, Calum Bowen and Andrew Masson, to develop the music for his games, Andrew is essentially a one man show at Notion. “For the most part, I’m the programmer, artist, designer, promoter, etc.”

While he will occasionally get someone to help out with the art for cut scenes, it’s no surprise that he wears many hats given his motivation to get the job done. In 2012, after the release of Up Up Ubie for iOS, his programmer left Notion Games. With little else in the way of options, Andrew began teaching himself how to do the programming on his own. 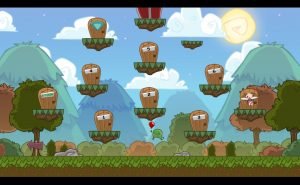 “One of my major obstacles that I had to overcome was learning how to design for games, create art for games, and learn game programming logic in a very short time. I don’t have funding for the company outside of doing gigs for other companies to make ends meet and the support of my hard working wife. I also didn’t have a team to continually push the company. It’s hard to do so whenever people are not receiving paychecks,” he says.

In addition to juggling the many responsibilities at Notion, Andrew and his wife have two young boys, Omar, 6, and Eli, 2. He is also attending the Denius-Sams Gaming Academy at the University of Texas on a full scholarship. “At first it was really difficult. Trying to find time to work on projects and be able to take my sons to school or daycare, take my wife to work, and go to school. That was a super challenge,” Andrew says.

“But like with everything else, you just adapt. If you want something, you’ll figure out a way to make it happen. Honestly, nothing about being an entrepreneur is easy but I’ve been living this lifestyle for so long, I just don’t know any other way.”

Andrew’s obstacles thus far have only prepared him for one of his biggest challenges yet as a creator: the development of his game, Team Notion. An action-packed, beat-em-up adventure game, Team Notion is set in the comic-like streets of Vernon City where heroes Drew, Sandy, and Panda are pit against the evil alien, NeNe, who is bent on world domination.

While parts of the game draw influences from classics like Streets of Rage and Mega Man, Andrew is on course to create something that is truly his own. Filled with lush environments, puzzles,vibrant characters, and amazing music courtesy of Andrew Masson, Team Notion is gearing up to be one of the most anticipated indie games of 2017. 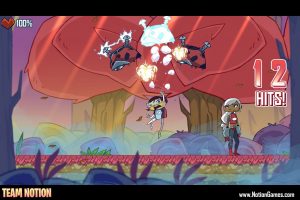 Despite the struggles and challenges of being a father, student, and business-man, Andrew doesn’t feel overwhelmed by it all. “I’ve been a father for over six years. I have been working on various entrepreneurial ventures since I was eighteen. I moved out of my parent’s house at eighteen. I feel like I’ve been living life on hard mode my entire adulthood thus far. So I’m just really used to it.”

For someone who has been running his business for only four years, Andrew has done tremendously well and shows zero signs of stopping. He has made the Forbes 30 Under 30 List, and has been featured in various publications including Black Enterprise, Pure Nintendo Mag, Atlanta Black Star, and more.

He has a vision for Notion Games that includes turning his characters into household names and becoming financially stable for life. He knows exactly what he wants to do and in the end, he wants to be remembered as a creator who inspired and uplifted millions.

“As I continue to progress, success keeps changing its definition,” Andrew says. “Originally, just making something move was considered a success to me. Then creating animations and merging it with sounds. Then filling out a screen with background art.” Andrew makes it clear that he has leveled up by setting small milestones that lead to greater and greater accomplishments. However, like any true entrepreneur will tell you, there’s always the need for more.

“I don’t think we ever get to the point where we feel truly successful. We always want to do more and more and more until we are just physically unable to. I look at the works of Steven Spielberg, Miyamoto, Akira Toriyama a lot and see all of the amazing projects they’ve created or been a part of. I can tell they continuously want to go further, beyond what they’ve achieved,” he says. “I think there’s no limit to success.”

Remaining positive, motivated, and innovative has been the cornerstone of Andrew’s accomplishments thus far, leading to well-received releases like Super Ubie Island Remix and many accolades and opportunities that have set a bright course for his future. He is currently a Technical Artist at Aristocrat Technologies in Austin, TX and is continuing to develop games such as Team Notion, Super Ubie Island 2 and Sheep Herder Nay for mobile platforms.

Where Notion Games will be in the next few years remains to be seen but with Andrew at the helm, the possibilities are endless.

Find out more about Notion Games at www.notiongames.com