Nationwide — Inspired by the global phenomenon #blackgirlmagic, Black-Girl-Magic.com has been 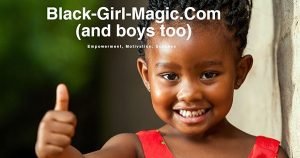 launched to empower Black girls and boys around the world to achieve success. The hashtag discussion group recently started on Twitter and quickly gained momentum as great Black women achieved supernatural success in sports, entertainment, business and other industries.

During the 2016 Olympics, the hashtag dominated the celebratory tweets as numerous Black women achieved greatness in winning multiple medals in this worldwide competition. It was after the Olympics that the inspiration to create Black-Girl-Magic.com came to Allyson Ward Neal, the website’s founder. “I loved seeing all of those inspirational tweets about the achievements of so many Black women in the Olympics. And, I have a six-year-old daughter, so I was inspired to create this site so that she and her peers can have a website where they can always see Black girls and boys achieving greatness. It’s important to their development,” she said.

Black-Girl-Magic.com has plans to attract major advertisers who can partner with their website to bring positive and empowering messages to Black youth. The site will feature a regular blog as well as features on some of the most influential Black women and men who are achieving greatness in society. The site will also include information dedicated to education and provide tips and resources for minority children so that parents, guardians and caretakers can help Black children to succeed academically. And, Black-Girl-Magic.com will have a public presence at popular festivals and events where children and youth can interact with real Black girl magic figures.

The site’s founder is a children’s book author who has produced positive images for Black girls since 2009, through her Ava Books. It was her dream to reach Black children around the world to give them increased empowerment opportunities to make their dreams come true. She sees Black-Girl-Magic.com as an excellent platform to accomplish this goal. “Our mission is empowers girls (and boys) of color to achieve their dreams. Whether it’s in sports, entertainment, academics or having just plain fun, we want to give Black children the tools that they need to be successful.”

Black-Girl-Magic.com is a website that empowers girls (and boys) of color to achieve their dreams. Whether it’s sports, entertainment, academics or just plain fun, they want to give Black children the tools that they need to be successful. They believe that every great Black person started their path with tons of role models and lots of support. Like them on Facebook, follow them on Twitter or email the founder at allysonwneal@gmail.com.