February 16th, 2018 can not get here soon enough, and Entertainment Weekly is making things even worse.

The article goes a bit more into the synopsis of the film, laying out an international espionage/ political thriller, filled with super-heroic action. 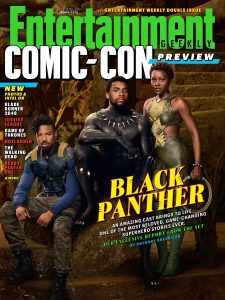 From the article: “In this movie, a lot like politics, it’s a little tricky to define who’s [a good guy],” says director and co-writer Ryan Coogler (Fruitvale Station, Creed). “The film very much plays with those concepts, looking at conflicts and different motivations, and who’s with who.”

In addition to this awesome cover, Entertainment Weekly also dropped 20 exclusive images from the movie which can be found here.

Check out the trailer below to keep yourself even more hyped.