Recently I spoke with Hilton George the Founder and Con-Chair of BlerdCon, a new convention that is an all encompassing celebration of Geek life and culture for EVERYONE! As the organizer of this new con he was able to give deep insight into his passion for creating BlerdCon and the Vulcan like (Infinite Diversity in Infinite Combination) approach to its formation. 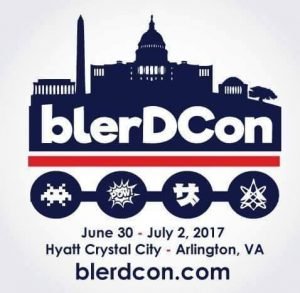 BlackSci-Fi.com: Tell me a little about yourself and the Kickstarter campaign to launch BlerdCon.

Hilton George: It’s been a two-year journey building an event that focuses on diversity, inclusion, gaming, cosplay, sci-fi and comics. I’m a longtime geek, I’m also a black man for which the word blerd derives (black nerd). I came up with the idea of BlerdCon about 4-5 years ago. I was out at various cons, seeing how much diversity there was in the con attendees at a lot of my favorite conventions. Every size, shape and gender and I noticed how everybody was really bound by the fandom more so than anything.

It was really inspiring to see and as a new con goer I was looking for a venue myself to attend that focused on underrepresented groups like African-Americans, Latinos, LGBT, and people with disabilities. Aside from a few niche cons that were focused on either women or African Americans, no one really had anything that was really inclusive or broad on the scale of the conventions I was fond of attending. Like something out of The Hunger Games I put myself as tribute to make this happen.

I began to do a lot of research, bringing in folks who I knew that were members of the convention life, just trying to find out what was already out there because I didn’t want to reinvent the wheel. The conventions that are out there for the under-represented populations are necessary, they serve a very needed purpose, but I wanted to make something that was different.

I wanted a hotel con, I wanted 24-hour content, I wanted cosplay contest, and we got the wheels turning on it. I brought in my business partner, someone I went to college with who does venture capital, we kind of put the bones together for BlerdCon over the course of a year or so, you know locking down the name, copy writing the logo and putting all the proper paperwork in place. just getting all the things lined up before we went promoting something that didn’t exist. Usually a first-year con is very humble or small but we want to be a little bit bigger than that we weren’t looking to take over Essence Fest, just planning for about 600 people, get a couple rooms here and it’ll grow.

But then the demand came in and people started to project onto the BlerdCon flyer on display at conventions and websites, their highest ideals and expectations. As a marketing person myself I know that there are ideas that you have to shove down the throats of the public before they bite, but this caught fire in a very big way. Suggestions and requests started coming in and we were like “wait a minute this budget is getting a little bit bigger than where we were quite prepared for” so we came up with doing a Kickstarter. If the crowd wants an event that’s going to have more than what we have in the basic framework then let’s put this to crowdfunding and see what the people respond to.

With the Kickstarter we kind of put it out there and we channeled a lot of that enthusiasm and gave people the opportunity to purchase the tickets and contribute in different ways through the Kickstarter. Now we’re in a position where we’re able to bring in more of that bigger, expanded content, more video games, bigger guests, performers cosplay contests, and promote at a higher level and that’s what we’ve been up to for the past six and a half months. 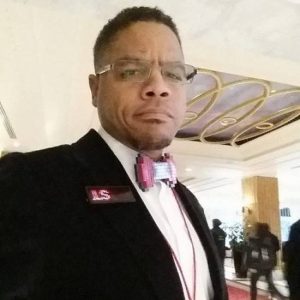 BSF: How is this different from any of the other Cons that have been popping up? What type of events/panels will you have?

HG: We have over 70 panels approved at this point which is over 3 days. So if you go to church just go ahead and light a candle for me, we’re on a 24-hour scale. The panels are going to go from 9-10am till 10-11 at night, we’re even going to have content that we’re specifying as BlerdCon After Dark. There’s going to be something for everyone to do the entire time. There might be a 3-4 hour break from like 2-6 in the morning where certain parts of the content will stop because we know not everybody’s going to be up till 4 in the morning.

It was very important for me that this be a grassroots event. I didn’t want this to be a con where events are set up by Industry folks, “here’s a big banner for the new Infinity Wars” and “Hey here’s this new product”. I wanted this to be more grassroots where the people have more of a hand in shaping the content of the event and panels, even the framework of how we invited people to be guests. I want people to feel a sense of ownership ownership in BlerdCon I don’t want them to feel like, “I’m going to the buffet and the BlerdCon committee is going to serve stuff to me on a tray.”

The Blerd struggling geekdom is shared in part by a lot of other communities through representation and inclusion. We have all these communities that are participating and contributing content. Yyou’re going to see panels on body shaping issues and cosplay, panels on lgbtq transgender issues, panels on African American artists, animators and creators that are just talking about their creations. I wanted the diversity piece to be so profound and so across the board that we would be able to have some of our panels and some of our workshops to not have necessarily diversity content. For example you have someone who’s Asian transgender doing a workshop on sewing and never introduces their gender or their ethnicity into the workshop. It’s just a sewing workshop.

BSF: What’s been the biggest obstacle you’ve had pulling this all together?

HG: I’ve been all over the country representing BlerdCon, I’ve been to LA, New York, and Nashville, setting up these tables with selling the idea of BlerdCon. I’ve had black nerds walking up to the table and looking quixotically with their head turned, deciding if they’re hearing a pitch that they can’t quite discern in the air or the pronunciation and breaking it down. It’ll be the first time they’ve heard the word and I was like “you’re a blerd, this is your community, this is your struggle, and you’ve never even heard the word”.

Other people who’ve heard the word and don’t like it saying “why do I have to be a blerd? Why can’t I just be a nerd, why do I have to separate myself?” You check a box that says African-American when you get a license, you don’t necessarily have to separate yourself but it does describe you. And to some, whatever degree you embrace it, it’s not a misnomer this is what it is and there’s a portion of our community, the black community, that does not want to see themselves as singled out in anyway and that the word blerd and the BlerdCon is that separation. 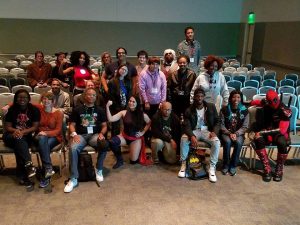 There are people that don’t want to share their community in any way and don’t want to share the stage with non black people. there are some folks who’ve  said it, there’s a very slim minority, but they’re out there and you know they’re like “why do we have to have all these other groups involved in BlerdCon” and I said “because we share a struggle, it’s not the same struggle, it’s not the same solution but we’re kind of fighting for the same thing” and if you look at your history you know like the Civil Rights Movement there are non African Americans on the bridge at Selma they’re not the majority. They’re not even a quarter of the people, but there are folks who are either members of the Jewish Community or members of the Latino Community, or women that are fighting not just fighting as African-Americans, but as women who wanted to vote.

I think that logistics have been the easiest thing because we’re all running off of an established framework. I’ve made a conscious decision to use anime and gaming as a foundation for the con. I love the way that anime and gaming convention goers take a certain ownership to their conventions. The anime con goers are “this is my convention. yhis is the one I support and go to every year.” And even if they have a bad year, fans leave comments, make suggestions, some volunteer and do stuff to make things better the next year, but they’ll stick with it and I want that to be introduced into BlerdCon.

I know this sounds ambitious and I know it’s not going to be perfect. We’re going to hit some stumbles along the way, but this is why we’re doing an annual event so we’ll progress and if we do it right I believe it’s going to be a marketable success to this event. 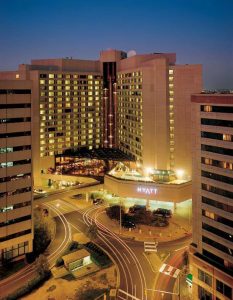 What’s next for BlerdCon? Will it travel to other cities?

In my mind BlerdCon when it’s in its perfect form, it’s not a singular event, it’s not just a con, it’s a movement. It has to be a year-round mission, what we’re trying to do, what I’m trying to set up as a structure is a movement that it exists in some form or another around the calendar. Maybe not a bunch of cons that we do, but maybe BlerdCon provides the go-to panelist for diversity at the non-diversity conventions out there, that are in some very vanilla parts of the country that really struggle or are not equipped to take on a mission like this because of where they are.

If there’s somebody that wants to fly me out to Des Moines because I have a PowerPoint that touches on all of this, I want to be that guy. I want BlerdCon to be the collective ambassador of diversity and inclusion. There’s already partnerships that we’ve set up with other events that are contributing content. The movement will travel and go places and do presentations and sponsor events, but BlerdCon will stay in the Hyatt Crystal City area. Our five-year mission for growth is to turn this into a DragonCon North (Mardi Gras for geeks.) We will expand out with the mission, show up at a lot of places and have a BlerdCon panel or table, but this will be the culminating event of the year.

BlerdCon will take place from June 30 – July 2nd, 2017, you can find them on FaceBook, Instagram, and Twitter for the most updated info on what looks to be a new chapter in con life.