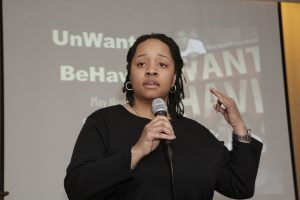 “I felt there was a void in the community where I live when it comes to teaching art. I’ve always had a love for film. After college, I wanted to go back to teach kids how to use a film camera.”

And that’s exactly what she did. Janine Spruill is a filmmaker and Executive Director of Lil Filmmakers, an organization that works with Philadelphia youth to learn the techniques of filmmaking and produce their own film projects. In the beginning, she taught 4th and 5th graders in West Philadelphia, and once the interest grew, she recruited friends who helped teach summer programs.

“No one was in the hood teaching kids how to make movies. The digital age was transforming and becoming more accessible. I saw that as an opportunity to help kids get a head start.” Fast forward a few years, and Spruill found herself forming classes in community centers to work with youth on every facet of filmmaking, from writing to acting to directing.

Spruill’s work not only allows her to jumpstart the creative development of youth, it serves as an outlet for her own

passions. “I was an introverted kid. I had different ventures as a teenager. E.T. made me completely smitten to become a filmmaker. I was inspired by the art of storytelling and using film as that medium. I wrote a lot of stories as a kid, but bringing it into fruition was something different. My journey has been about creating this business and working with youth. That has allowed me to see the world through their eyes, so now I can articulate my own stories.” It seems that Lil Filmmakers as a project has been teaching her as well. “I’m getting back to writing and producing my own works,” she says, “but I’ve learned different aspects of filmmaking through running this business.”

Currently, about 60 youth participate in the Lil Filmmakers program, meeting from September to June after school in programs around the city. An intensive summer program hosts a smaller group of kids who meet 6 days per week. The organization partners with professionals of stage and screen who teach acting workshops, along with screenwriting and other elements of film. Participants are in complete control of their work; they write, produce, act, edit and even score their films. Their works are released for proud parents, staff and community supporters to enjoy. And no expense is spared – movie theaters are rented to give the kids’ films a complete red carpet premiere. On one occasion, the kids arrived in a Hummer limousine.

It’s these kinds of moments that inspire Spruill the most. “One of the biggest rewards is watching [participants] grow into adults and continue their career. I watch them grow and evolve as artists. They even get to the point where they find you in the way,” she says with a laugh. “But to see that is power. They’ve grown and matured where they can make creative decisions for themselves.” 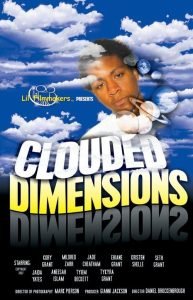 Nearly all of the projects that Lil Filmmakers creates involve speculative fiction; their stories underscore poignant observations about the larger world – the questionable acts and harsh realities. Spruill certainly understands the appeal. “I love spec fiction for the same reasons as the kids I work with. You can be really creative and imaginative.” There’s Formula X, a horror story about a corrupt beauty cosmetic company. Clouded Dimensions is a sci-fi adventure exploring the importance of teamwork. But Erudition, an upcoming feature film, is their largest project to date.

The film depicts a country ravished by war, a charismatic yet manipulative leader and an underground group of artists, thinkers and educators who decide to challenge the current decaying state of their society. Currently in post-production, the film uses the landscape of war, poverty and revolution to illustrate the issues revolving the mass school closings throughout the Philadelphia area. A release date is scheduled for June 2016, and it’s been a large undertaking for all the students involved. Says Spruill on the ambitious project, “The kids are even editing [the film] themselves. We have partners working on the score and marketing techniques. We want to move beyond screening for a local community and tour the film once it’s complete. We wanted to create this world in the film to see the scope of how this affects people on a personal scale.”

The conversation about Lil Filmmakers led to sharing about film in general, including Spruill’s influences (Julie Dash, Spike Lee, Quentin Tarantino, Steven Spielberg), geeking out about upcoming films (“Suicide Squad, Batman vs. Superman…there’s a bunch…I need to make a list!”), to perspectives on the current film industry and how it relates to Black women. About the importance of Black women filmmakers: “[As a director], you’re managing other storytellers, and you’re guiding everyone through the process. As a woman of color helming this work, it sets the stage for another woman of color to do this type of work. This work and representation has to be consistent. This is important, because over time, this means it becomes normalized.”

Spruill knows firsthand how difficult it can be to bring a film project into fruition, but there’s still much tenacity to 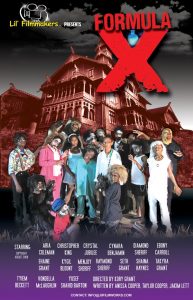 her dreams and goals, both as an educator and an artist. “You just have to do it. One of the biggest things that will prevent you is fear. Fear that you’re not good enough, too old, too young, too Black, whatever the case may be. You have to trust the process…we’ve been working on some projects since 2011, but we’re still pushing through. Regardless of what happens, it makes you better as an artist.”

A dynamic filmmaker in her own right, Janine Spruill remains invested in the future of growing artists in Philadelphia. The success of Lil Filmmakers is certainly fueled not only by the commitment of the youth involved, but Spruill’s own passion as well. “Art makes you look inside yourself and figure out what matters to you. Your art is about you, but it’s not for you. It’s a voice for people who don’t have one. Your job is to get viewers to talk about things. Using your art as your power to talk about what matters to you.”