Did you know that June is National Black Music Month?  In 1979 music icon Kenny Gamble of Philadelphia, PA successfully initiated a movement to have the month of June recognized as Black Music Month, in an effort to celebrate the many contributions black artists had made to American history and culture.  Though there was a ceremony held by former President Jimmy Carter to make it official—due to a lack of a signature on President Carter’s behalf it wasn’t made official at that time.  In 2000, through the efforts of radio icon and “Mother of Black Music Month” Dyana Williams and US House Representative Chaka Fattah, Black Music Month was made official under the Clinton Administration.

In 2009, President Obama further defined June as African American Music Appreciation month, deeming the start of the summer as the beginning of a celebration of all “black musicians, composers, singers, and songwriters [who] have made enormous contributions to our culture.”

Hip Hop—a culture in and of itself—is responsible for many contributions to black music in America and worldwide. 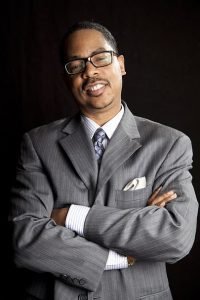 Ahead of National Black Music month, I recently had the opportunity to catch up with Curtis Sherrod, Founder and Executive Director of the Hip Hop Cultural Center in Harlem and organizer of RAPACON– a Hip Hop centered convention featuring a cosplay mashup that will be taking place in Philly on Sunday May 29, 2016.  Check out Part 1 of the interview as we count down to June 1st when we roll into our Black Music Month coverage here at Black Sci-Fi.com.

Tiara Jante: Can you tell me a little about yourself and your background?

Curtis Sherrod: “I’m a first generation hip hopper from the Bronx—the home of hip hop.  I grew up in the same neighbored as Cool Herc did—the guy who many say invented Hip Hop.  I had my first record out in 1979.  I’m the owner of the largest hip hop flyer collection on the planet. I’m a serial entrepreneur and RAPCON is my latest effort.”

TJ: What was the inspiration behind RAPACON and what do you hope to accomplish with it?

CS: I saw the buzz that Comicon was getting and I [saw] that it was clean, wholesome, [and] multi-generational.   I was like wow what can we do from a hip hop aspect that’s like that since hip hop is now over 4 decades old?  You have young people and you have grandmothers that have hip hop experience.  So I wanted to see what we could to do pay homage to what came before. Then I thought if we can entice people to come to RAPACON then they come dressed as Run DMC, Salt N Pepa, [and] Straight Outta Compton [because] those looks are so iconic and they resonate.

It’s a way to pay tribute.  America has a way to stealing culture and misappropriating the people who invented it with the people who are in the ruling class.  They have people thinking they invented Rock & Roll, and before you know they’ll have your kids’ kids thinking that they were the ones who invented Hip Hop. I wanted to create something that was a hip hop conference—an all-day conference where it starts at 10 in the morning and doesn’t end until 1 the next morning.” 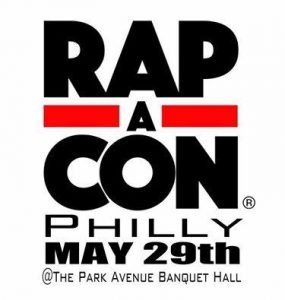 TJ: Can you tell me about what’s in store for people attending RAPACON?

CS: “There will be something for everyone.  There’s a lot of young people who are getting into show business but they don’t understand the business part, so we have on session just for panels.  We’ll have panels on speed networking, how to become a better performer—we have a panel on the politics [of the industry] and economics that is being led by Yumi Odom of ECBACC and Danny Simmons (Russell Simmons’ brother).

We’ll also have an Entertainment Lawyer present who will be doing 15 minute sessions with artists to review and educate them on their contracts.  Another factor of the event is we’re trying to break records. One thing we’re doing to break records that we have going on is called DJ-CON. DJ-CON will be the longest assemblage of deejays participating in an unending cypher.  The first one I did was in Harlem at the Apollo Theatre about four months ago and we had 125 deejays.  I think we’re going to surpass that record in Philadelphia, I think we’re going to do 150 in Philly—per capita I think y’all have more deejays.  [Then there’s the cosplay element.]

We’re having a contest, so whoever has the best hip hop/cosplay mashup will win $500.00. So we have people coming as a Lil Kim/Wonder Woman.  We’ll also have a prize for the most old school outfit—so if someone comes with the official tissue 1999 old school pager and your Adidas and dookie rope chain—there’s a prize for that person too.  We’re also having an event called RAPATHON—it’s something we’re kind of famous for. It’s where we get 150 rapper and [they] rap for 24 hours straight.  We’re doing a mini version for two hours in Philly since this the first time we’re having it in Philadelphia. 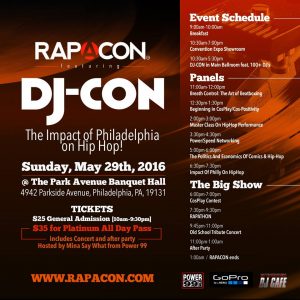 Finally, we’re calling this event “The Impact of Philadelphia on Hip Hop”.  We’re doing this because we feel that Philadelphia is unsung in regards to its overall impact so we’re doing an awards ceremony where we’ll be honoring Philadelphia natives Bahamadia (who’s our spokesperson), Schoolly D, Three Times Dope, Grand Dragon K D, Harry P, and there’ll be a tribute made out to them with a specially designed award given to each of them…and then of course we’re having a contest and an after party.”

RAPACON takes place on Sunday May 28, 2016 at the Park Avenue Banquet Hall in Philadelphia, Pennsylvania.  You can find out more information about the event as well as purchase your tickets at www.rapacon.com. BlackSc-Fi will be in attendance so look for #iamblackscifi and come over and say hi!  Don’t forget to come back to the site in June to read Part II of my interview with Curtis Sherrod as we talk about his views on Hip Hop, Rap music and much more.