Here at BlackSci-Fi.com, we’re a bit hyped for a little show called Luke Cage. Scheduled to air on 9/30/16 on Netflix, we’re gearing up for hours upon hours of binge watching for this long overdue addition to the Marvel Cinematic/ Television Universe.

We checked in with some of our staff to get their insight into what’s sure to be another great offering from the Marvel Television/ Netflix Team.

I think that a show like Luke Cage is long overdue and something that’s very much needed. It’s not just 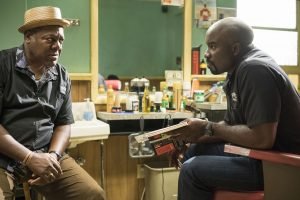 the representation  of a black super hero (which is important) but that black culture permeates the undertones of the show. It’s set in one of the most culturally significant parts of NYC (Harlem) and it’ll be interesting to see how it plays a role for Luke Cage as a character, just like Hell’s Kitchen did for Daredevil. I’m also looking forward to seeing Mahershala Ali and Alfre Woodard. As soon as I saw they were casted, I knew the talent was going to be solid.

Add to that, Misty Knight. She’s a character that I always wanted to see get more shine because she’s so dope. I’m glad she’s going to be at the forefront here and will be getting more looks, even from people who don’t read comics.

And did I mention the music? The Hip-Hop lover in me is so hyped for this soundtrack! Seeing Meth pop up in one of the trailers was awesome.

So needless to say, I’ll be MIA come Friday.

When Robert Jeffrey II initially asked me to give some thoughts on the premiere of Marvel’s Luke Cage on Netflix for this piece, I was a bit apprehensive and straight up told him it might not be a good idea. As I sit here thinking and typing away to put these thoughts down though, I think this might actually be worthwhile- it might take a while to get there but, that kind of sums up my relationship with this character. 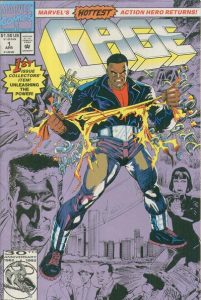 You see, unlike a lot of black comic fans, I’ve never been a big Luke Cage/Power Man fan until very recently, and had never really cared for the character with a deep set dislike burned into my soul from the very beginning when early on in my comic fandom. I was presented on one hand with the likes of Spider-Man, the X-Men, Daredevil and Batman. Cool characters with cool stories and costumes- and on the other, this…


Without having known anything about the character’s then 20 year history and all that came with it (the yellow disco shirt, the tiara, the criminal background, Iron Fist, etc…) my introduction to Luke Cage was, to be perfectly blunt, what my then 13 year old mind interpreted as someone’s bad joke about what how a leading black superhero would appear.


I still bought the book and gave it a quick read, but compared to the hero books I was into I was disappointed to say the least, even moreso because this was, as I interpreted it, was supposed to be a hero for me. As years went on, I kind of lost track of Luke Cage, but at some point I became aware of the history and that didn’t serve to make things any better.

Ultimately though, there was a Luke Cage resurgence with a notable appearance in Brian Michael 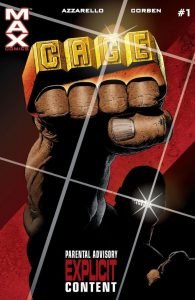 …again, despite my initial misgivings I bought that first issue and while now 23 year old me was under no delusions about what Luke Cage  was and represented (and by that time I was already creating my own superhero comic), the initial wound burned a bit deeper- so deep that nothing over the next, wow, decade-plus it turns out, was able to heal things.

Even as I have come to enjoy the brilliant new Power Man and Iron Fist series by David Walker and Sanford Greene, that enjoyment comes largely from the fact of having almost purposely ignored the last decade-plus of development. The Luke Cage I am reading now is almost a totally new character. And this (I told you upfront this would be a bit of a journey) brings me around to why I am looking forward to seeing Luke Cage on Netflix- not because of any love or longheld fandom for the old character, but because I am legitimately excited for the bold and new vision that every trailer and every image I have seen presents. I am excited because this… 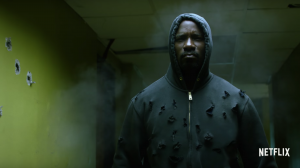 …and everything from his initial appearance in the Jessica Jones series is something 38 year old me is down for 100 percent with no misgivings.

To be honest, I’m quite new to Luke Cage’s character. After I read the very first issue of his comic (its available digitally for free via Comixology), I’m very interested to see how his character will be portrayed in the show. Luke will be the first black superhero I’ve seen onscreen in years. 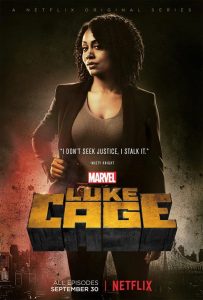 world. Since he’s a bulletproof black guy who can smash through walls, he can overpower racists. We really need that, especially with the countless black men and women that have been dying at the hands of police. Luke Cage has the potential to give people hope.

How does it feel to see Misty Knight brought to life? Although I’m pretty green to her character, I’m excited to see her onscreen. It’s not often you see a black female detective skilled in martial arts. For me, Misty represents something I wanted to see while watching Bruce Lee films, a kick-butt, smart female martial artist who doesn’t take crap from anyone. I’m also hoping she gets that bionic arm I’ve seen her with, so we can get some disabled people of color representation too.

Join the BlackSci-Fi.com “Luke Cage: Episode 1 Watch Party “on 9/30 @ 8 pm EST as we live Tweet/ review the episode on our Twitter page (https://twitter.com/iamblackscifi).

I’ll also be doing a live FB review on my FB page (https://www.facebook.com/robertk.jeffrey) for BlackSci-Fi.com.

Follow our hashtag, #lukecageblockparty on Twitter, and join us as we watch the Hero for Hire save the day.