BlackSci-Fi.com teams up with the 2017 African American Authors Expo!
0 Comments

On Saturday October 7, 2017, from 11am-5pm, Balitmore, Maryland based Morgan State University will play host to the 8th annual African American Authors & Empowerment Expo. The day long event will be free to the public, and includes panels, writing related workshops with some of the industries most talented authors, and a vending area to peruse.

As a part of the event,  BlackSci-Fi.com will host a workshop titled “Developing a BlackSci-Fi story in three parts ( Character creation, Developing the Art, and marketing the/ Publishing the book)“. The workshop will take place from 3pm-4pm EST.

The workshop will allow participants to learn about the various facets of creating a piece of black speculative fiction, while getting a chance to pick the minds of panel members who bring years of experience of creating to the workshop. 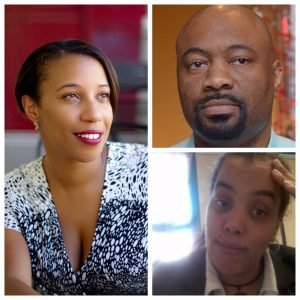 –Kenesha Williams is the Founder/Editor-in-Chief of Black Girl Magic Lit Mag. She took to heart the advice ,”If you don’t see a clear path for what you want, sometimes you have to make it yourself”and created a Speculative Fiction Literary Magazine featuring characters she wanted to see. Kenesha received her B.A. in English Language & Literature, with a Concentration in African Diaspora Literature. She is a multi-genre author and screenwriter. You can find her at her eponymous website and on Twitter @Kenesha_W & @BlkGirlMagicMag

–Tuere T. S. Ganges, a South Jersey native, writes in Baltimore, Maryland. She was a June 2009 recipient of the Archie D. and Bertha H. Walker Foundation Scholarship to the Fine Arts Work Center in Provincetown. Her fiction has won prizes at the Philadelphia Writers Conference; and has appeared in the Shine Journal, Flask and Pen, Milspeak Memo, Mythium Literary Magazine, Wigleaf, Fiction Circus, and a Pushcart Nominated piece in Referential Magazine. Wilted and Other Stories, her collection of short fiction is available as an ebook on Amazon.com. When she isn’t trying to keep up with her teenaged children, she’s trying to keep up with her teenaged students. And when she’s had enough of that she entertains herself with countless games of Word Hero and live tweeting. Follow her on Twitter @tuereganges.

–Maurice Waters is the Founder & President of Black Sci-Fi.com, a premier digital destination for fans of science fiction and other speculative fiction–specifically as it relates to the African American community. The website features stories, videos, entertainment and news features that shine a light on the many contributions to Black speculative fiction from Black creators across the globe.

A pioneer of Black science fiction on a digital scale, Waters started his career in Philadelphia’s media market as a reporter, producer and program assistant. Beginning in the 90’s, Waters has produced and hosted numerous Black Sci-Fi panels and workshops along the East Coast and has worked with organizations such as Temple University’s PASCEP program, Art Sanctuary’s Celebration of Black Writing, and the Big Apple Comic Con. For 7 years he was the Vice President and Event Coordinator of the East Coast Black Age of Comics Convention (ECBACC) in Philadelphia; a convention with the largest gathering of its kind on the east coast.

Through his work, he realized there was a growing demand for Black sci-fi related content and products, and being a fan himself, decided to combine his talent and interests in the genre to create Black Sci-Fi.com. In a world that often forgets people of color, Black Sci-Fi aims to inspire inclusion within a niche genre that Black people are very much a part of. By producing content that highlights creators of color within Black science fiction, Waters aims to inform and inspire the imagination of individuals who aspire to live beyond the boundaries of everyday life. Website blacksci-fi.com, Facebook : I am Black Sci-Fi, Twitter @iamblackscifi, Instagram @blackscifi.

Head to http://aaaexpo.ning.com/ for more information on the expo. 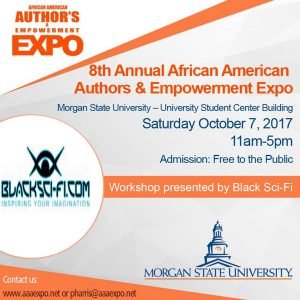