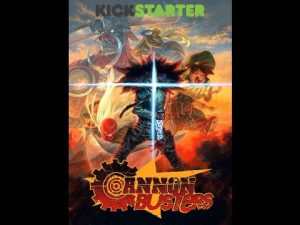 Kickstarter supporters of renowned animator/ illustrator LeSean Thomas’ (whose work has appeared on The Boondocks, The Legend of Korra (Book 1), Black Dynamite: The Animated Series) Cannon Busters will have a lot to look forward to on July 8th with the preimere of the pilot episode of this highly anticipated series!

As explained via the official website for Cannon Busters “the project brings together talented contributors, such as Joe Madureira (Darksiders), ThomasRomain (Space Dandy), and Producer, Tim Yoon (The Legend of Korra). The campaign also garners the support from animation studio, Satelight Inc. in Japan, (Macross Frontier, Basquash!) and Cannon Busters is an animated adventure story about the value of friendship and just how far one is willing to go to maintain it. “Think The Wizard of Oz meets Hidden Fortress with a dash of Escaflowne + Hip Hop and classic RPGS — all rolled into one ride of fun, suspense, action & wackiness,” says Creator/ Writer/ and Director of the Cannon Busters animated project, LeSean Thomas.”

To keep those Kickstarter supporters satiated until the official episode drops, check out the recently released Cannon Busters official trailer below. Head to http://www.cannonbusters.com/ for more information: