Note: There are minor spoilers for Netflix’s Castlevania below

I am an enormous fan of video game series Castlevania. I have been playing the games since I was six years old. The concept of a lone warrior battling against the monsters, ghouls, and ghosts of historical lore was fascinating, along with the ultimate antagonist, Dracula, awaiting the player at the end of the adventure. So it was natural that I would be drawn to Netflix’s critically acclaimed Castlevania, a stylized, adult-themed anime following the storyline of Castlevania III: Dracula’s Curse and written by esteemed writer Warren Ellis. 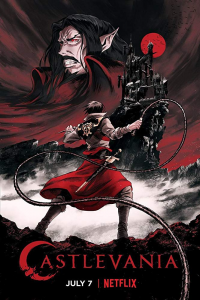 Season 2 of the show introduces several new characters, including Isaac, who is one of Dracula’s generals in his genocidal commitment to destroy humanity. This is not Isaac’s first appearance within Castlevania’s lore, as he is part of the main storyline of Castlevania: Curse of Darkness. However, for the Netflix show, Isaac has been reimagined with Nubian features as opposed to his Japanese, lighter skinned origins in gaming circles.  Adding to the already stellar voice work by other famous cast members, Adetokumboh M’Cormack’s vocals as Isaac clearly stand out above the rest. The deep, rich baritone of M’Cormack’s Isaac takes the cold calculus of the characters dialogue and adds a deeper layer of simmering emotion beneath Isaac’s quest to help fulfill Dracula’s destiny.

Partway through the season, the viewer is introduced to Isaac’s backstory as a character. Young Isaac served under a White master who compiled lots of knowledge possibly as some sort of lore keeper of import. This character is beating the child Isaac bloody with a whip with spikes all along his back. He is being subjected to this brutality for trying to read and learn more to better himself. Within the exchange of dialogue, Issac cries out that he loves his mentor, and only was reading to help his master. The White man replies in turn that that is why he is beating him. Young Issac then turns on his master and kills him with his bare hands. The irony presented is that now that Issac is an adult, he self-flagellates with a whip to purify his body and mind. 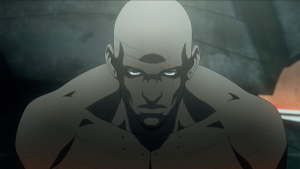 Black people have been denied access to read and write for centuries because access to knowledge meant access to power. The choice to have Isaac have his defining developmental catalyst coincide with being beaten with a whip by his White master willfully ignores the substantive history of Blacks being subjected to centuries of this particular violent act and uses the common literary trope of blackness only being defined relationally to subjugation and domination of individuality by White masters. In stark contrast, the other general Hector who also happens to be White, his development is purely based on his emotional attachment to animals and is completely devoid of any relational properties between himself and other forces.

By actively using this trope of Black liberation defined by White violence allows for the understanding of racism as a brutal, radical, and alien concept that is as quickly dismissed as the media that portrayed it on screen. As long as the bad White guy is defeated by the beaten and whipped Black guy, the audience is at once able to process and quickly reject the nuance surrounding this narrative without critically understanding the historical precedents that allow this trope to exist. The bludgeon of vitriolic overt racism indeed is present today, but the true power of white supremacy is how it subtly has controlled our culture within various systems, including how we consume the media around us like Castlevania.

The solution to this issue is one I have championed before in previous articles. I will state that point once again, that the writing room should reflect a diverse array of individuals from differing backgrounds to be able to prevent continual tropes and literary crutches from continually being used within popular media. And that is the ultimate shame of it all. The show is really good! The characters, particularly Dracula, have very differing and intent motivations that are excellent when they come into conflict. Yet continually we see in media when it comes to blackness it is rarely present, and when it is, it is a male, written lazily and subjugated to the same tropes seen in Castlevania’s Issac.