Sweet and Sour: A Chat with The Purge: Election Year’s Brittany Mirabile
0 Comments

It’s October—the month many people devote to shock, horror and mischief, with the grand finale of sorts being Halloween Day.  It’s also Black Speculative Fiction month, and since BlackSci-Fi.com makes it a point to highlight individuals of color involved in the creative process of speculative fiction—I was thrilled by the opportunity to interview Brittany Mirabile, the talented actress in The Purge: Election Year. This talented actress shocked and awed audiences everywhere with her dynamic performance as Kimmy—a beautiful and sassy, yet undeniably sociopathic young woman out for blood—literally. 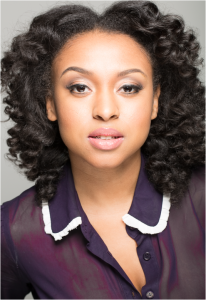 Horror is an interesting genre—there are so many areas in which creators can delve to examine the psychology of fear—from the monster under the bed, to the ghost in the mirror, or as illustrated in The Purge franchise—coming to terms with the reality that there are monsters all around us.  It’s especially interesting to view horror and violence through the lens of a character who is seemingly desensitized to it.

With all the horrific things happening in the world today—is it so farfetched to believe a purge could really happen?  Or is it already happening?  These are the topics I explored during my conversation with Brittany, a budding young actress who no doubt has a big future ahead of her in horror and beyond.

So, how did such a new talent to the field land such a poignant role in one of the biggest franchise horror films of the past decade? Actually, my manager at the time submitted me for the role. They asked me to videotape myself in one of the scenes and then my manager sent it in.   I was actually on my way from the gym when my manager called me to tell me I’d gotten the role.  I really didn’t expect to get it—so after my audition I just went back to my waitressing job at the time–because up until then I hadn’t had any major roles like that—I’d always played supporting roles such as the “best friend”, so of course I was very excited when I got the news I was selected for the role.

Brittany’s character Kimmy is unique because during the film when we are introduced to her during the corner store scene, we are presented with the dichotomy of sweet on the outside and sour on the inside—becoming instantly intrigued by a contrast that plays greatly on our overall reception to the character, especially our ability to empathize with her—or not.

While many people know Kimmy from her infamous “candy bar” quote—Brittany is quick to point out that it’s much more than a candy bar when it comes to Kimmy.

What would you say is Kimmy’s real beef? When I prepared for the role, I had to come to an understanding that it is much more than the candy bar to Kimmy.  It was about revenge—by any means possible.  You have to understand—Kimmy grows up in an era where the purge is all she knows—so her mentality is, she doesn’t accept no for an answer, and if someone isn’t willing to give her what she wants—she will take it.  And it’s perfectly legal during the purge.   I had to get into the mind state of someone who is willing to kill her own parents.  That’s what excited me about this role—her mind and what she was willing to do to get what she wants. 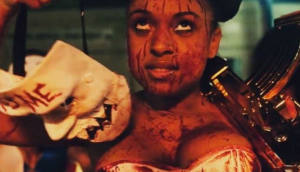 When it comes to a character like Kimmy, do we look past her sass and disrespect to see a troubled young woman who unfortunately has grown up being exposed to extreme and brutal violence on an annual basis— and therefore can’t be held responsible for her behavior?  Or, do we see right through to the core of a woman who is evil and ruthless beyond imagination?  This is the dilemma viewers are presented with when they encounter Kimmy—followed by a fear at the notion that someone like Kimmy is actually possible.

Why does a character like Kimmy resonate so well with its audience? I think it resonated because it’s kind of close to what is going on now–people can actually watch it and say wow–that can really happen? Like, you can go online and watch kids getting jumped just because of their sexual orientation or their religion–like it’s crazy.  I think that’s why people received the film so well–because it’s something that they can see happening and it makes you think.

The truth is the increase of violence, and the horror of what’s happening around us domestically and internationally is a very real fear to have—especially with the controversy surrounding one of our more “unique” candidates this election year. It’s come to the point where many people are wondering about the possibility of a purge actually happening under the leadership of a certain presidential candidate.

What do you think of such speculation? I don’t think it will happen literally–however, I do see the potential for it happening systemically–it kind of is already though… but that’s all I’ll say about that without getting too political.

Fear can be caused by many things—but it’s something about the unknown and unfamiliar that induces a special kind of fear.  I’m talking Jason, Michael Myers—even Brittany’s character Kimmy at one point in the film.  And now we have the clowns…and I’m not talking about the one(s) running for President—I’m talking about the real life “killer clowns” that have been causing some serious panic in many communities across the United States.

What would you say about clowns induces so much fear? I’m not really scared of clowns. *laughs* I’m not sure.  The only thing I can think of that would scare me about clowns is maybe with kids around, and the clowns are secretly predators.  That would be scary to me.

When I think of clowns, I think of masks, mystery, and fun frights—all elements of Halloween. Along with masks, costumes are essential to the Halloween experience.  So, I wasn’t surprised to discover how popular “Kimmy” is as a costume choice this Halloween season.  Even Cosplayers are rocking Kimmy’s killer look at cons when she appears with her Candy Squad in the latter scene—“Kiss Me Mask” and all.

How do you feel about all the attention your character’s “look” has received? 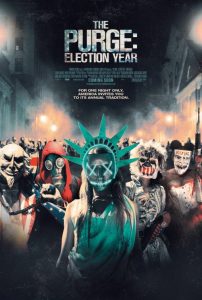 It’s been amazing.  I’m so honored that people are choosing to be me this year for Halloween—like I would’ve never thought my character would inspire so many people—and I’m very appreciative.  I tell all my fans if they dress as Kimmy to hashtag their pictures on Instagram with #CandySquad, and I try to feature them on my own Instagram page.

So, what’s next? I have a few projects in the works. I really can’t go into detail about them all, but there is one project that I’m excited about. There is a science fiction based web series that I’m doing that’s in pre-production right now—we’re still finalizing some things with the script, and I’m starring and producing on that one–but I’m really excited about it–and I love the character that I’ll be playing. She’s like a girl that gets to travel through different dimensions–so I was really excited when I read the script–but that’s all I can really say about that right now.

Brittany is talented, personable, and her strong fan base is evidence that we are witnessing the beginning of something exciting and new to film.  I know one thing, I’m sold on what Brittany’s selling, and I have no doubt we’ll be seeing more of Brittany in the near future.  In the meantime, make sure you get your copy of The Purge: Election Year, now available on DVD, Blu-ray, and VOD.  Brittany is also hosting a Halloween Purge Party this year in New York.  For more details, go to purge.eventbrite.com.

Check out the awesomeness that is Brittany Mirabile on the reel below!