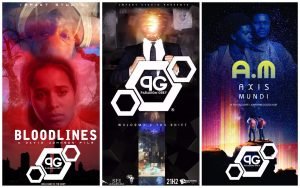 Black Speculative Fiction,Horror and Sci-Fi represent a vastly under served segment in cinema that is begging to be explored. African Americans fully support these genres but constantly complaining about the lack of quality representation.

With the runaway success of Jordan Peele’s “Get Out” the world saw that there is a huge market for Black genre films. And with the massive anticipation of marvels “Black Panther”, Paradigm Grey is poised to be a groundbreaking new chapter in Black Cinema.

Chicago based filmmaker Christopher Adams of Impakt Studio, assembled a like minded team of extremely talented fellow Filmmakers and Industry Professionals to create the beginning of several volumes of genre defying feature length films and television projects, with a focus on spotlighting the African Diaspora in roles you don’t typically see them in.

There are whispers and murmurs from the Black TV and Film Industry in Chicago, that no one wants to work together to build a stronger platform coming out of Chicago. Paradigm Grey negates that. Six Chicago Based Black Production Companies IMPAKT STUDIO ,SEI STUDIOS, BRIGHTSEED COLLAB, FILM BARREL STUDIOS, CASSANDRA BELL STUDIOS, 21H2, along with outstanding Chicago based talent, have worked countless hours in production to develop content from various aspects of the genre to include: post apocalyptic, sci-fi futuristic,
supernatural horror, political horror, social thriller.

Chris Adams states, “The greatest thing to come out of this process was the creative problem solving that came from the open sharing of knowledge on a myriad of tasks that enabled us to overcome the budgetary constraints of such diverse and dynamic visions, allowing this dynamic team of innovative creators to successfully collaborate and explore the possibilities. Welcome To The Shift.”