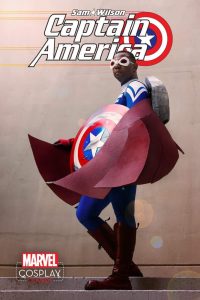 I thought about starting this piece with speaking about how huge cosplay has gotten in today’s pop culture industry. I’d planned on waxing on and on about how, in this writer’s opinion, the level of skill and artistic fervor needed to put together such pieces is on par with the same type of zeal a fashion or costume designer brings to the runways of Paris or back lots of Hollywood.  I’d planned on telling stories about how much this writer’s mind has been blown over his fifteen years of convention going by the awesome assortment of costumes that he’s been fortunate to lay eyes on.

Whether you’re in agreement with any of that, or vehemently disagree with it, you can’t deny one thing: cosplaying has become an entrenched part of today’s speculative fiction landscape, and comic convention circuit. There are television/ web series dedicated to the craft (Heroes of Cosplay, Marvel Method: Cosplay). Head to any convention, and there’s bound to be a large cosplay presence on panels, in the vendor’s area where fan’s line up for autograph’s, and on the floor where some cosplayers can’t even make it a few steps before being called on constantly to snap a picture with an eager fan.

Cosplaying is huge, and with the continued representation of such talented individuals as Eddie Newsome, it continues to grow in popularity and skill.

A veteran of the US Navy, hailing from Newark, New Jersey, Newsome has found his calling within the world of cosplay. For close to a decade, he’s attended conventions such as San Diego Comic Con (SDCC), Dragon Con, and a host of others, showing off such awesomely crafted costumes based on Static Shock, Deadpool, Isaiah Bradley/ Captain America, and Deathstroke.

Newsome’s talent within this field has given him opportunities to meet such celebrities as Chris Evans, Mark Hamill, Darryl “DMC” McDaniels, and has even led to him being featured on an upcoming Marvel Variant cover in his popular Sam Wilson/ Captain America cosplay for Sam Wilson Captain America #1.

”I started cosplaying about 9 years ago.  I’d always wanted to, but I made a promise to myself that I would only do it when a character really connected with me,” Newsome said in a recent interview with BlackSciFi-.com. “One day I read Truth: Red, White and Black by Kyle Baker and Robert Morales, and my hunt was over.  I found my first cosplay costume, Isaiah Bradley, the First Captain America.”

”I’ve always been a comics guy from the very beginning  and my first comic that I read was a Marvel Comic called Omega the Unknown. I think it did play a huge part in my cosplay. The idea that we have the ability to bring to life a character that either we’re connected to, inspired by, informed by, or that has even helped us through a rough patch in life is what this is all about to me.”

Though his cosplaying has run the gamut with a number of characters, two of Newsome’s standout costumes include the Sam Wilson and Isaiah Bradley Captain America suits.  They’ve become so popular that as Newsome explains, his cosplay comes up as one of the most viewed images when conducting a Google search for two key phrases.

“I chose Isaiah Bradley because when I read the comic I saw a lot of my struggles, and also my life in the military. The story was so complex, yet so straight forward. I saw myself in the costume as I read the book. When I saw the Sam Wilson costume it was a no brainer.  Anytime you Google “Isaiah Bradley or Black Captain America” and your picture comes up, the universe is telling you something (laughter). “

Using this inspiration Newsome began his trek into the deep waters of one of the most ultimate cosplay venues, San Diego Comic Con. He found that there was a great amount of positive reactions to be found when he debut his Isaiah Bradley/ Captain America cosplay, but he also encountered some unnecessary negative reactions.

“My first con was San Diego Comic Con and it was great!  It was also the year I debuted as Isaiah Bradley, and crazy enough, it was the year I met Kyle Baker, the creator of the character, while I was in costume!” Newsome said.

“There was a lot of positive feedback but along with that came the negative.  People who didn’t know the story or the character called me everything from Captain  “N” to Captain Africa, but the Internet corrected them when they posted those comments on the Marvel website that posted my pics.”

Newsome has continued to use his positive experiences with cosplay to push further in his craft, creating such notable costumes of Deadpool, Deathstroke, Gladiator, Static Shock, and Black Panther. The inclusiveness and diversity of the field of cosplay, which creates an environment where everyone can participate, is an added plus Newsome remarked. When asked about the inclusiveness of cosplay, where the recently wrapped Dragon Con was cited as an example, Newsome expounded more on the “this is for EVERYONE” mindset that cosplay captures.

“Dragon Con is the perfect example of “come as you are “. It’s such a liberating experience to be in a place where no matter what you wear it’s accepted and totally inclusive. There will always be hurdles no matter what,” Newsome explained.  “The key is how do you handle it? I’ve always been of the mind set of “if you think that not including me bothered me. ..think again.”

Taking it even further on the topic of diversity and inclusiveness, Newsome explained that as a cosplayer of color he felt there’s a certain responsibility that such cosplayers have.

“I never thought of myself as a prominent cosplayer, just a person who was blessed enough to have the opportunity to meet, connect and work with a lot of celebrities and cosplayers,” Newsome said.

“I think there is a certain responsibility we as cosplayers of color have. I wasn’t the first and won’t be the last. I know it’s my duty not only to myself, but my community as a whole to set a standard and exceed the one that was set before me. I hope that the next generation, be they young in age or at heart, do the same.”

Eddie Newsome as Sam Wilsom: Captain America with the cast of Agents of S.H.I.E.L.D

As his career as a cosplayer has continued to develop, Newsome has had an opportunity to meet such celebrities as The Agents of S.H.I.E.L.D cast, Reginald Hudlin, Chris Evans, Vivica A. Fox, Darryl “DMC” McDaniels, and Michael Jai White.

“Its (meeting these celebrities) has been great,” Newsome said.  “My 3 favorite meetings have been Chris Evans, Mark Hamill and John Barrowman. They have all been gracious and really excited with the concept of cosplay and the dedication it takes.”

Newsome has continued to grow as something of a celebrity himself with the recent announcement of his inclusion as Sam Wilson/ Captain America on a Marvel Variant cover of Sam Wilson Captain America #1. Newsome is one of many cosplayers who are being featured on these collectors’ covers that feature them as their respective series counterparts.

“I’ve been a fan (of The Falcon/ Sam Wilson) since the costume without the wings.  It’s a great honor not only to be on the cover but, to be a cosplayer of color at that is HUGE. I hope that somewhere someone sees the cover and thinks to themselves “if he can do it so can I”!” Newsome said. 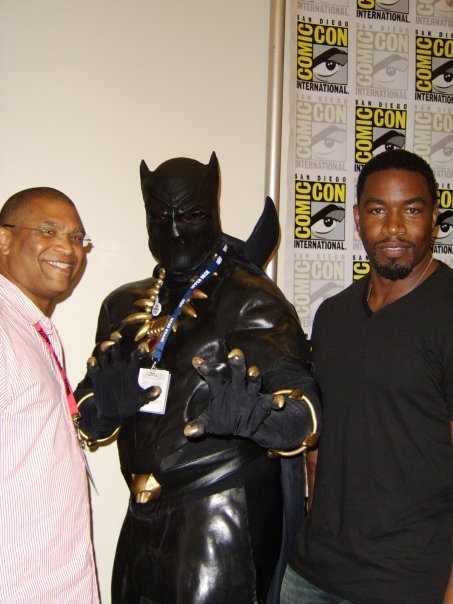 “Bigger projects (including his co-writing duties on the upcoming The Overstreet Guide to Cosplay)and better costumes along with a continuing social commentary on the cosplay front…GO NY GIANTS!”

For more information on Eddie Newsome head to https://www.facebook.com/eddie.newsome.1?fref=ts and to get more information on his upcoming book, The Overstreet Guide to Cosplay, head to http://www.amazon.com/The-Overstreet-Guide-Cosplay-Collecting/dp/1603601856 andhttp://www.barnesandnoble.com/w/the-overstreet-guide-to-cosplay-melissa-bowersox/1122088904?ean=9781603601856.