I’ve been a huge Star Trek fan for as long as I can remember. Next to my love of comic books, Star Trek is the fandom with which I most relate, and a huge part of that is because of the late 80’s/ early 90’s era of Star Trek on TV. Star Trek: The Next Generation opened me up to my love of Trek.

I was 11 in 1993. I remember watching commercials for the new series leading up to the January 3rd premiere date, simply enjoying the fact that I was going to get a chance to see more Star Trek. To say that I was not ready for the awesome storytelling that was about to pop off was an understatement to say the least.

Star Trek: Deep Space Nine at its most basic level is the story of Commander Benjamin Lafayette Sisko (Avery Brooks). A Starfleet officer, Cmdr. Sisko and his son Jake (Cirroc Lofton) travel to Deep Space Nine, where the elder Sisko is slated to take command. The station (originally called Terak Nor) was originally occupied by the alien species known as the Cardassians, during their forced occupation of the nearby planet Bajor. After a long and brutal war, where the Cardassians forcefully subjected the Bajorans to all sorts of wartime horrors, the Bajorans are able to win the war, forcing the Cardassians to leave Bajor and the Terak Nor station.

In the process of rebuilding their society, the Bajoran Provisional Government invites the United Federation of Planets to maintain joint control of Deep Space Nine, and this is where Cmdr. Sisko is brought into the story. What unfolds from here is a seven year journey for Sisko and a complex cast of characters as they navigate such themes as religious faith, race relations, political intrigue, and the darker aspects of a post wartime civilization.

Below are some of the reasons why this show stands as my favorite/ the best Star Trek/ one of the best sci-fi series that has ever been made. 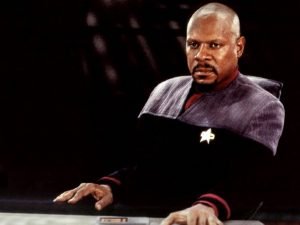 When Star Trek: Deep Space Nine premiered in 1993 I’d never seen Avery Brooks in anything. I know now of his time spent as the character of Hawk from Spencer for Hire, but that wasn’t one of the show’s that I’d grown up with.

So my first introduction to this great actor was on Star Trek: Deep Space Nine, and I’m glad that this was the case.

And Star Trek, at times, did just that. You can look no further than our list here of the Ten Noteworthy Black Star Trek Characters. At other times, we got the “African planet episode of Star Trek“.  The less said there, the better.

Let me just take a moment to get that racist a@# foolishness out of my head. Woosah. 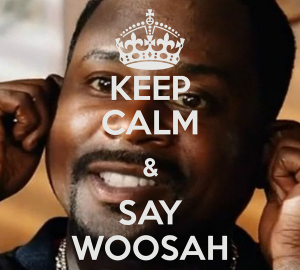 So we definitely had seen captains, and scientists leading or supporting the charge into the unknown regions of space on an ever expanding voyage of exploration. Only after Star Trek, The Matrix film series for me was the only place where it seemed that WE existed en masse in the future.

So to see a commanding officer like Captain Benjamin Lafayette Sisko (Before my fellow geeks raise their pitchforks, I know he was a commander when he took over Deep Space Nine, and didn’t get the Captain rank until later on in the series. Please calm down.) take the reigns of this truly complex and multifaceted branch of the Star Trek mythos was great to see. From his first scene with Captain Picard (which had me a little shocked but also thinking “this dude is cool AF”), to Brook’s stellar performance in the season six episode Far Beyond the Stars, Sisko was THAT DUDE. 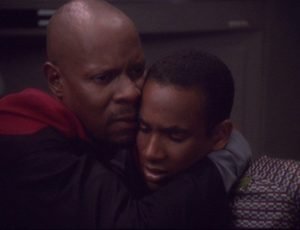 Whether he was balancing the social/ cultural/ political waters of being seen as a religious savior for the Bajoran people, navigating an ever complicated political landscape with a complex array of alien species all with their own agendas, being a captain during one of Starfleet’s most trying war time eras (the Dominion War), and lastly but most importantly for me, being a single black father in one of the greatest sci-fi series’ to ever be created, Sisko had a lot to deal with during the 7 year run of the series.

And let me harp on one last point here: Sisko was a single black father. In a genre that often doesn’t focus on any part of the black family, to see a black father caring for his son against such a fantastical backdrop, was an awesome thing for a young black boy on the southside of Chicago to watch on a weekly basis.

My go to video game right now is Star Trek: Online. Its an MMORPG (Massively multiplayer online role-playing game) set within the Star Trek universe, and definitely should be checked out by non-Star Trek fans, and Star Trek fans alike. For the long time Trek fans it also gives you a chance to visit such well known Trek locales as the planet Risa, Starfleet Academy, the planet Vulcan, Wolf 359, and Deep Space Nine.

As my friends who I game with can tell you, when I visited the station in the game for the first time I kind of freaked out in a good way. Not for the simple fact that I was visiting a place that I’d seen on one of my favorite television shows of all time. More so, I love the heck out of this station.

When the show first premiered, a lot of Star Trek fans didn’t like it. One big reason, that I’ve come across a lot in subsequent years, was that the crew didn’t go anywhere. They weren’t explorers. They were just chilling on a space station.

The unfortunate thing about looking at things from this perspective is that you missed what the creators, writers, producers, actors, and crew of the series were focusing on. There are many facets of the United Federation of Planets. Some of those facets include the exploring, galaxy jumping exploits of crews found in such series as Star Trek: The Next Generation and Star Trek: Voyager. Other facets of this organization included space stations such as Deep Space Nine.

What I felt that I was getting with Deep Space Nine was an opportunity to see inter-species relationships at their most complex. Deep Space Nine might be the place where you’d see an Andorian freighter captain conducting business with a Bajoran spice trader. A Dabo girl chopping it up with an Orion Federation officer over a drink or two. Whether those relationships were brought to the forefront for an episode, or just occurring amongst extras on a set, such interactions as these represented the true goal of bringing the species of the universe together underneath the Federation’s charter.

Added to that, Deep Space Nine’s strategic positioning by a wormhole which connected the Alpha Quardrant to the Gamma Quardrant, always provided solid storytelling opportunities for the series. This leads me to my next point…. 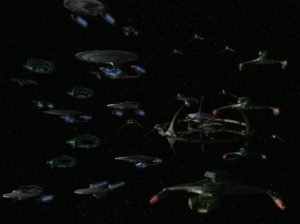 A scene from the Dominion War story line from Deep Space Nine.

Star Trek: Deep Space Nine was the first time that I was introduced to the idea of serialized storytelling on television, or as Wikipedia defines it, “serials typically follow main story arcs that span entire television seasons or even the full run of the series, which distinguishes them from traditional episodic television that relies on more stand-alone episodes.”

Though the show did have its standalone, more traditional episodic episodse throughout the series, Deep Space Nine became known for telling overarching stories, for example the host of episodes that focused on events such as the Dominion War. In a time where serialized storytelling has become a standard for a variety of TV series such as Lost, Battlestar Galactica, The Wire, Breaking Bad, and Game of Thrones, Deep Space Nine was a trendsetter in making this form of longform storytelling more popular on television. 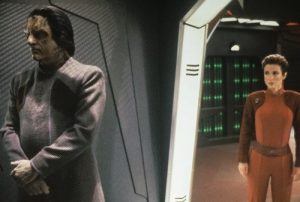 Whether the show focused on race relations (The Duet, Far Beyond the Stars), complex political intrigue (In The Pale Moonlight), the horrors of war (Siege of AR-558, Rocks and Shoals), or a soldier suffering from PTSD (It’s Only a Paper Moon), Deep Space Nine was never one to shy away from tackling complex subject matter. And this is not to say that it was the only Trek show to handle such subject matter. I feel though that it was, and is still the only Trek show to tackle such themes on a consistent, creative, and well balanced manner.

When Trek is “putting in that work”, its when it shines a light on us a humans. It draws parallels between our own real world issues and this fantastical, though not too far fetched, backdrop of aliens, spaceships, space stations and what not. For example with an episode like Far Beyond the Stars, through watching Sisko deal with being a Black male science fiction writer in the 1940’s, whose voice continues to be stomped out because of his race, is one black audiences can relate to on a variety of fronts. One in which your potential as a human being is continually tossed to the side just because of some preconceived notion based on what you look like. Take that even further, and you can add any disenfranchised group of minorities to the mix, and you now have a sci-fi story that speaks to many.

That’s Star Trek at its finest.

So I type all this to say, Happy 25th Anniversary Star Trek: Deep Space Nine. You are truly appreciated.