If you didn’t know, Lupita Nyong’o is slated to star in the upcoming zombie flick, ‘Little Monsters’.  The film is about a washed-up musician (Alexander England) who volunteers to chaperone his nephew’s kindergarten class field trip after taking a shine to the plucky teacher, Miss Caroline ( Lupita Nyong’o). Dave’s intentions are complicated by the presence of Teddy McGiggle (Josh Gad) the world’s most famous kids show personality — and competition for Miss Caroline’s affections. One thing none of them bargained for, however, is a sudden zombie outbreak, from which Dave and Miss Caroline must protect the children.

The comedy/horror film is slated for release sometime in 2019.

Are you looking forward to seeing Lupita in a zombie film?  We don’t know about you,  but we’re kind of down to see Ms. Nyong’o in anything.

Check out a still shot from the film below. 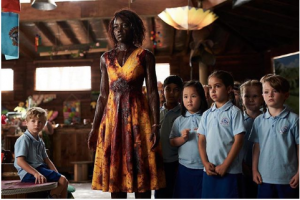