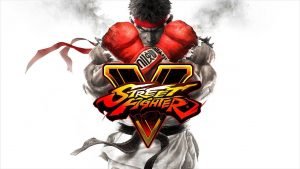 March 30, 2016– Today, Capcom will release the first post launch character to join the illustrious Street Fighter V lineup. Fan favorite Alex made his first appearance in  Street Fighter III back in 1997, and he hits the streets again as a brash grappler whose bold attitude often gets him into trouble. His parents died while he was still young, so he was raised by his father’s friend who taught him everything he knows about fighting. Alex will be battle ready beginning today for all Street Fighter V players on PS4 and PC.

Also launching today, the In-Game Shop for earned currency (aka Fight Money) lets players spend their hard earned Fight Money to purchase extra game content, such as new characters (100,000 FM each) and Story Mode Costumes (40,000 FM each). Guile, Ibuki, Balrog, Juri, and Urien will be releasing later this year and each will have a Story Mode costume available for purchase using Fight Money. Additional content will be announced at a later date.

Since the In-Game Shop for real currency (aka Zenny) is not available just yet, Capcom is offering Alex as a free trial period 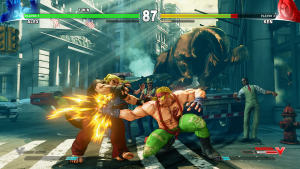 Earlier this week, several new Street Fighter V game updates and enhancements were made available to players, including:

Finally, as a way of thanking players for their patience and understanding throughout the beta phases 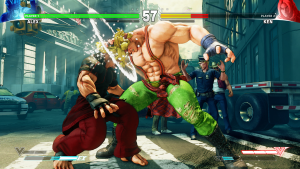 and game launch, Capcom is making Ryu and Chun-Li’s Story Mode Costumes available for free to all users beginning today. This is an 80,000 Fight Money value; almost the full amount of a new character. Capcom is planning to release a steady stream of new characters, modes and other enhancements throughout the year and the Street Fighter V team is excited to begin the robust post launch support this week.