The Fiyah This Time: An Interview With Fiyah Lit Magazine
0 Comments 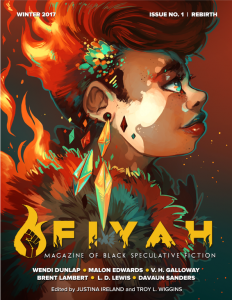 BlackSci-Fi.com This magazine was inspired by the Harlem Renaissance magazine of the same name. If you could give a copy of this magazine to any of the writers involved in that magazine, who would you give it to?

Justina and Troy: Looking over the contributors of the original FIRE!! Magazine, we’d definitely gift copies to Langston Hughes and Zora Neale Hurston. That seems like an obvious choice, but those authors have had a huge impact on us. Hurston’s “Sweat” was a direct influence for Troy’s story “A Score of Roses” which appeared in the Long Hidden: Speculative Fiction From the Margins of History anthology. Hughes’ memoir, The Big Sea, reads like fine magical realism. Plus, we think that those two probably have a good appreciation of the speculative, and we’d hope that they’d really love the first issue and the homage overall.

BSF: How did you go about getting the magazine’s team together and putting out the call for writers for the very first issue?

Justina and Troy: The Niggerati Space Station (NSS) was developed out of a desire to have a safe space for black SFF writers, readers, and fans to congregate away from the mainstream white SFF community. There was another space, called Fizzgig, that was dedicated to black writers critiquing each other’s short fiction and encouraging submission to magazines. Fizzgig was kind of a spiritual forefather to NSS. Many of the members of Fizzgig were invited to be a part of the NSS. When Phenderson Djeli Clark pitched the idea that eventually became Fiyah, all of the active NSS members discussed it for a while before a core few of us decided to try and make the magazine a real thing. Everyone who wanted to seriously commit to Fiyah took on a role to make it real, and here we are.

We opened up submissions for Issue One: Rebirth to every writer present on both NSS and Fizzgig–this was something in the neighborhood of 50 writers. We also solicited work from selected writers whose work we knew and liked.

BSF: The theme of the first issue is Rebirth. Why was this theme so important to have for the debut of the magazine?

Justina and Troy: The whole concept of Fiyah began with Phenderson’s idea for black SFF writers to do a tribute anthology or issue to the Niggerati Manor’s FIRE!! Magazine. In FIRE!! some of the best black writers of the time directly challenged the restriction of black art and black literature (which came from other black writers in addition to traditional power structures) by creating a magazine with work that tackled subjects like queer relationships, colorism, and freedom of sexual expression.

These were the same sorts of things that the authors lived with every day. We wanted to do the same thing with the first issue of Fiyah, and give voice to authors who could tackle some of our most pressing issues. We think we did a good job of that in our Rebirth issue, but we admit to being somewhat biased.

BSF: Nearly twenty years ago, author Samuel Delany predicted that the more writers there were in black speculative fiction, the more racism would rear its ugly head. The Fireside Fiction State of Black Spec Fic is hard proof of that prediction. What systemic changes do you think need to be made in order to have more black writers published? 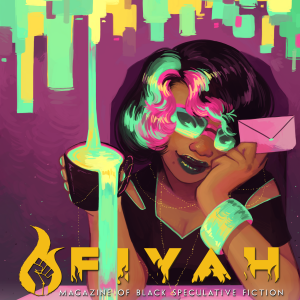 Justina and Troy: We really need publishers and the SFF community to be honest. One thing that the Fireside Fiction Black Spec Fic report made clear was that lots of short fiction markets were saying one thing but doing another. There were diversity statements and lip service, but magazines were publishing the same three or four black authors, when they decided to publish any of us at all. There were lots of magazines that published one story from a black author out of 40 or 50 stories for the year. That’s really telling! And when they were confronted, when the Fireside report said “hey everyone, this is what’s really happening,” you could see the reactions.

Some folks were shocked, most were defensive. That defensiveness is unnecessary. Just keep it real, first and foremost. Is your magazine, is your imprint, is your small press open to publishing black writers? Are you willing to do that work? And if you aren’t, that’s totally your right! But don’t pretend that you want to be fair and inclusive and then your actions show the opposite. And when these markets and publishers are able to keep it real, then black writers will know, and they’ll keep their work away, and readers who don’t want to support those places can take their money somewhere else.

And for those folks who do want to publish inclusively, it’s going to take work, starting with mastheads and editorial outlook. If you hire inclusively, your masthead will be equipped to handle work from black writers. Editors are going to need to really force themselves to see value in the work of black writers. I’ve said this before, they’re going to have to get uncomfortable. I recently saw a post from Niall Harrison (Editor-in-Chief of Strange Horizons) in one of the digital spaces where black SFF writers congregate. That’s a start.

Black writers, both in terms of their work and their careers, aren’t going to look similar to writers of other races, and many of them who produce great work aren’t in conversation with the larger SFF community–because why should they be? But if you want their work, you’re going to have to be proactive about it. And you should definitely want their work, because black writers are writing fantastic speculative fiction right now. Even Delany says it, when he talks about black writers (specifically black queer women) writing now about their historical moment.

BSF: There are many genres of black speculative fiction that go beyond the standard fantasy and sci-fi label. What genres are you most fond of and have enjoyed seeing in your submissions?

Justina and Troy: We love all genres! We love good worldbulding, good characterization, and good storytelling. I also love to see all facets of black culture represented in speculative fiction, as we hope was represented in our first issue. Our submissions run the gamut, though. We’ve gotten some interesting work in our slushpile. Lots of magical realism, which is another favorite style of ours. One thing that we see a lot of is space opera. We love that black folks are so in love with the universe, with the idea of exploring and finding our way in a great formless beyond. For lots of us, especially those of us of the diaspora, space opera brings to mind the search for home, for liberation.

We’ve gotten some other interesting stuff too: we were excited to see solarpunk and Eco-SFF in the slush. We also see some really good horror stories in the slush as well. As for what we want, we’d love to see more cyberpunk and steampunk submissions. We featured Malon’s awesome “Long Time Lurker, First Time Bomber” in our Rebirth issue, but we could always stand to have more cyberpunk.

BSF: What themes have you been brainstorming for future issues?

Justina and Troy: Well, we don’t want to give too much away, but we are thinking of themes that black folks can write to, themes that have broad application but also speak to a particular history or experience. One of our editors mentioned having a hip-hop lyric themed issue, and we’re down for that.

BSF: What do you hope that Fiyah Lit magazine will accomplish years from now?

Justina and Troy: Right now we’re just focused on today, on getting our next issue out! We’re so new, that we’re really still trying to figure out what’s best from issue to issue.

One long-term aim of ours is to be a little bit more than just a lit mag. There are folks on our team, shoutout to Elle and Brent, who are masterful at planning events and social media campaigns that really engage black writers. We imagined this initially as a magazine and an incubator, and we hope to really create a space where black writers feel free to work to improve their stories and feel free to talk plainly about their desires, their struggles, and their victories.

We want to help every black writer who has a dream of their speculative fiction reaching a mass audience, because so many black writers are deserving of that success.

You can pick up Fiyah Magazine Issue 2: Spilling Tea here.