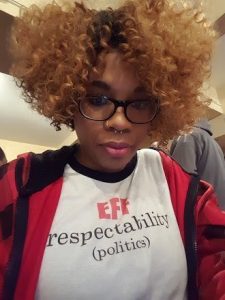 I set things up the best that I could. I tried to angle my laptop so the camera wouldn’t see the mess in the corner. I made sure to comb my hair and wear a nice shirt. I was going to have a video-chat with Foxy Jazzabelle and I wanted to look perfect. Fortunately, she just wanted to text because she’d been up late editing the convention panel footage she’d participated in the day before and wasn’t feeling camera-ready.

Slightly bummed because my inner-diva wondered what hair I’d be blessed to see her wearing, I was also relieved that Foxy Jazzabelle was a real person who had real business to deal with and still worry about her appearance, just like me. Naturally, our chemistry was beautiful and we talked like we’d known each other for years.

The panel she was on at First Con-Tact: Abduction, The Comic Book Spectrum: Discovering Careers that Power & Strengthen the Industry, was moderated by Regine Sawyer of Lockett Down Productions Publications. She’d also had a chance to meet other phenomenal women as a part of the panel. “I was able to meet Geish Vi, a VERY smart and awesome Black cosplayer, and all around nerdy girl,” she said.

“I was also able to meet Chelle Mayer as well. She’s been in the industry for a LONG time, and her grandad was an artist during the Golden Age.”

This, of course, brought us right into it, because I wanted to get her thoughts on the current geek culture. While she feels geek culture has “come a VERY long way,” she pointed out that there’s still room for improvement. Most specifically she explained, “There’s still issues of erasure and sexism within the culture itself.” Jazzabelle discussed her issues battling the “fake geek girl myth.”

“Back in the day, and sadly today, women in the culture have to face having our ‘cred’ tested because from the onset, we’re seen as interlopers, trying to infiltrate into the space. We couldn’t possibly actually LIKE games/comics/sci fi, etc., or be knowledgeable of those things,” she explained.

“We have to dissociate with our gender and conform to an already problematic space in order to ‘fit it.’”

I’d heard this argument before, not just from Jazzabelle, though her vlog P—— Politics in the FGC is a pretty good representation of the common criticism. I asked her opinion on how the issue can be addressed.

“I talk about these issues, tweet about them, get the conversation started.” (See the vlog I mentioned amongst many others.)

“I also confront the issues when I’m on the scene. Talking is one thing, but actually standing up for oneself and others is another animal.” There was an “lol” but Jazzabelle admits it isn’t an easy task. “Nobody wants to rock the boat or be perceived as a killjoy, but if said ‘joy’ comes from treating others poorly, what kind of joy is that, y’know?”

She made a great point. That kind of wisdom and courage to be a boat rocker doesn’t just come overnight. I asked if she was always the type to stand up for what she believed in.

Of course she was.

“Even as I was perpetuating that atmosphere when I was in the gaming scene years ago, I still took issue with myself and other women being underestimated and credential-checked. I’ve always cared about people being free to do what they like/love to do and not being limited by anyone or any –ism,” she said.

Indeed. I couldn’t help but to interject that I always thought that the freedom she spoke of having is what the gaming culture was supposed to be about. “Pretty much!” she agreed and added, “there was a time when even being a nerd/geek was looked down upon but that’s shifted. The geek/nerds have adopted the negative –isms of bro/jock culture…kinda ‘the oppressed becoming the oppressors’ sort of thing.”

I wanted to know how she’d transitioned from being the comic-book-loving, ass-kicking gamer to the video blogger who gets invited to speak at panels, etc. Jazzabelle admitted to it being a slow and steady process.

“I’m still transitioning. I just decided that I unabashedly love my hobbies and love expressing them, showing them, talking about them with others and building connections on that. Twitter has been the most helpful mechanism with that,” she said. (Twitter handles were exchanged. So sweet.)

“Writing, tweeting, and vlogging enable me to express myself and put my voice out there. And has encouraged me to create content, so now I write, and I’m back into drawing.” More on her drawing later.

I asked what she considers to be a successful vlog.

“For me, a successful vlog is one that educates, uplifts, and connects.” Hits and comments don’t matter? “I see some channels that are HELLA big, but they profit from catering to the lowest denominator on YouTube. Well, everyone wishes for lots of hits and comments, I’m no exception. I’m just aware of myself, my perspective, the things I talk about, and the dominant audience on [YouTube].”

At the time of the interview, Foxy Jazzabelle’s YouTube channel had 848 subscribers. She likes to get things off her chest and keep her subscribers and followers informed. “But I’m also adding more nerdy stuff. So when I go to conventions, I film panels.” She’s a part of the Women in Comics NYC International Collective and shares their panels on her channel.

She builds on her following by being active on Twitter, and she has 2,438 followers. She had a fangirl moment when Selma director Ava DuVernay retweeted one of her tweets and often geeks hard any time she interacts with comic writers and artists and they retweet.

“Though, I have to get on BlackGirlNerd’s level and get Samuel L. Jackson to follow me. That’s how I know I’ve made it.”

On the comics front,  she’s currently reading Bitch Planet, Sex Criminals, Harley Quinn, All-New All-Different Avengers, A-Force, Thor, The Ultimates, Sam Wilson: Captain America, and Jem and the Holograms. She recommends comic newbies check out Marvel’s Super Heroes Secret Wars, and also to read graphic novels and trades to get caught up on the histories of some characters.

Her advice for girls or women who may want to follow in her footsteps: “Be comfortable with your voice and speaking up for yourself. Utilize social media with that and connect with like-minded folk. Read comics, read other books, love yourself, and know you contribute something. Education never stops!”

Foxy Jazzabelle will be speaking on a panel at the 2nd Annual Women in Comics Con on March 12th at the Bronx Library Center. She is also trying to get to more cons outside of New York Comic Con (NYCC) and will be with the Women in Comics booth at the Javits Center at NYCC in October.

Don’t forget, she’s drawing again. She will be releasing her own web-comic series in late 2016. She also has a Spreadshirt store at shop.spreadshirt.com/FxJB where she has shirts for everyone but especially shirts FOR women and girls. “Ones that have a message JUST for us and not homogenized,” she said.