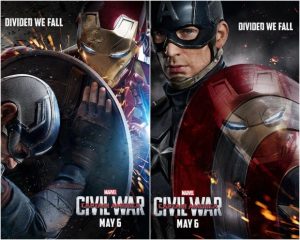 The culmination of about 8+ years of masterful world-building courtesy of the creative masterminds of Marvel Studios, you need to see this movie. Never have I’ve seen a superhero/comic book film hold so much emotional, ideological heft that it left you feeling somewhat emotionally spent after the climatic clashing of ideals.

Batman v Superman: Dawn of Justice addressed the issues of unchecked super heroics, and the effects that such actions had on everyday folks.

Captain America: Civil War takes this same plot thread and handles it so much better. I’m in no way trying to throw shade towards DC/ WB. But as in many instances in life, you have to acknowledge when someone comes along and does something better than you.

In every conceivable way.

The acting. The filmmaking. The writing. The special effects. The emotion. The action. The handling of multiple on screen heroes. Expertly handling multiple plot threads, and not mucking that ‘ish up.

Did I mention that 17-18 minute airport action scene? Where it didn’t seem that any of of the heroes were wasted, or off screen punching at air, or not showing their abilities off in such a way worthy of a Perez-esque double page splash? Or how about the opening scene in Lagos? Or the Bucky/ Panther chase scene? Or Scarlet Witch and Hawkeye trying to go ham’ on Vision? Or the final, brutal, wrenching battle between Bucky/ Cap and Iron Man?

Wait, or how about that 17-18 minute airport action scene? 🙂 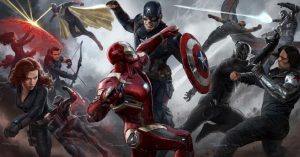 From the jump when 1991 pops up on screen, to the awesome end credits scene which in my opinion was the first end credit scene in a while to actually matter in the MCU ever since Fury popped up in Iron Man, everything is near to pitch perfect in this film.

Side note: Some folks want to fault Daniel Bruhl’s performance as the villain (Baron Zemo) of the piece as being “one-note” and falling into the lacking arena of most of their MCU big screen brethren.

And maybe he was simply nothing more than just a “plot point” that drove the final, and ultimate wedge between Evan’s Captain America, and Downey Jr’s Iron Man. But for me anytime that you can get me to empathize with the stories’ antagonist to the point where I understand and can relate to a certain extent with this character’s motivation for creating all of this mayhem and strife, you have me sold.

Bruhl is Alfre Woodard’s (great damn scene with her and Downey by the way) character, except he was a trained assassin hell bent on destroying the very destructive forces he felt ruined his life. He is the representation of every innocent person in the Marvel Cinematic Universe who finds themselves caught up between the heroes and villains of this ever changing world.

So was this a weakness of the movie? I don’t think so, but it seems to be a sticking point for folks.

Holland as Spiderman didn’t disappoint, and Queens was represented to the fullest. What left me smiling so damn much is that, and this is highlighted superbly through his great scene with Downey at his home, and numerous times throughout the airport battle sequence, is that this is a kid just enjoying being a hero. 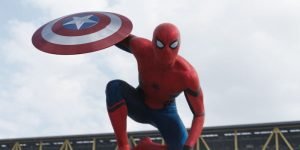 And as much as I love McGuire and Garfield, and some of those movies, I’m excited to have a possible on screen teenage Peter Parker/ Spiderman coming into his own while in high school. Not on the cusp of graduating, and then jumping into the “real” world.

A kid caught up in larger than life heroics, trying his best to please his new big brother/ possible surrogate father figure/ celebrity-idol/ etc, and throw down with the best of them.

I won’t go so far as to say Holland is the best on screen representation of Spiderman that we’ve had in the live action verse (we only have two major scenes to go by in a 2+ hour movie), but to McGuire and Garfield: dude is angling for that position in a strong way.

But the bulk of the time that I want to dedicate to this review/ recap goes to a certain certain prince that becomes a king by the end of this movie. So expertly portrayed by Chadwick Boseman. 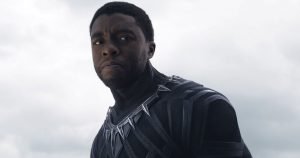 First and foremost let me say to the Russo Brothers, screenwriters Christopher Markus and Stephen McFeely, the Marvel Studios writers program, Kevin Feige, the execs at Marvel Studios/ Disney, and whoever had a hand in putting together this story, and the introduction of Black Panther and the nation of Wakanda to the MCU:

The collective breath of the black nerd community was being held in hopes that you didn’t f*&^ this up, and I can say that with the reactions I’m seeing online, and my own personal feelings, you guys knocked this out of the park.

From T’Challa’s and T’Chaka’s introduction at the United Nations/ Sokovian Accords summit, to T’Challa’s final scene in the Wakandan laboratory/ hospital I was sold.

I know the conversation will come up that there have been standalone representations of black heroes on screen for years previous to this, Wesley Snipes kick ass trilogy spanning portrayal of Blade being a standout example. Heck, this movie contained two strong examples of this with Don Cheadle’s take on James Rhodes/ War Machine, and Anthony Mackie’s portrayal of Sam Wilson/ The Falcon.

In the their big screen portrayal’s, as it is within the comics, I hate to say this, neither of these characters initially exist without the relationship that they have with Iron Man and Captain America.  I’m not even going to have the discussion of these guys being the typical “black sidekicks” because I think that there are arguments to be made on either side of that coin. 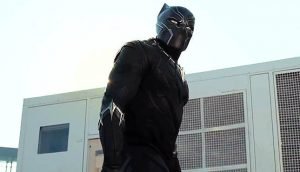 What I’m getting at with this is  Black Panther/ T’Challa exists only for himself. He’s not defined by a friendship, or any sort of partnership. Heck, when he was introduced way back when, it was to challenge Marvel’s first family, The Fantastic Four. He asked them to the party, not the other way around. 🙂

T’Challa is not defined by a relationship with a more prominent hero in Captain America: Civil War. He’s defined by himself, his duty to his family/ heritage, and to his country. How Boseman, the Russo’s, and Markus/McFeely were able to tie such ideas so damn awesomely into a 2.5 hour action/ drama/ superhero epic is something that should be applauded. And at no time did T’Challa’s quest for revenge feel like a filler side story, that bloated the movie to unnecessary proportions.

When T’Chaka is killed in the explosion at the summit, and you see T’Challa put that ring on, you know ‘ish is about to go down. And as the folks at Collider.com so expertly explained is that his drive throughout the movie is as a force. The Sokovia Acccords, and the heroes reactions/ and battles over said accord are secondary to Black Panther’s goal of bringing The Winter Soldier to justice, in any form or fashion.

Let the Avengers and other heroes have their little party. T’Challa could give a f%^& as he stays focused on his ultimate goal. If they get in his way, get ready for a vibranium laced kick to the face. 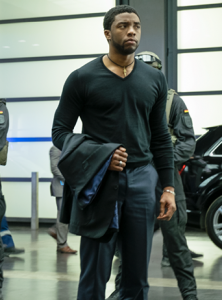 On another note, even when T’Challa is out of costume he exudes an air of regalness and self-assurdness that for me hasn’t been captured on screen in American cinema since Coming To America. Ya’ll laugh, but in a time where it seems that black people from any walk of life can’t be seen as being just as much of kings and queens in American media, as other folks are sometimes shown to be, Boseman rocking his GQ/ kingly swagger in between kicking everyone’s butt was great to see.

We definitely have such representation more within the indie comics scene, but here, Black Panther deserves the big screen treatment he’s finally receiving.

He deserves it  just as much as Batman, Superman, Iron Man, or Captain America.

Hell, he deserves it more.

There are folks who say “why tie race into everything”. To those people I say this: until you see folks who look like yourself relegated only to sidekick/stereotype status, or only getting the marquee status every once in a while when it comes to these fantastical stories that all of us nerds love to go see, you won’t understand.

That’s what Boseman meant for this black 34 year old comic book writer/ comic book fan sitting in a theater where there were Asian Americans, Black Americans, Caucasian Americans, Hispanic Americans, of all ages, maybe sexual orientations, whooping and cheering for Black Panther in various instances when he popped up on screen.

And yeah, the same could be said for moments with Mackie and Cheadle in their respective roles. But for the MCU’s newest addition, dude shone on so many platforms, you sometime needed shades to watch the movie.

Or maybe those high priced 3-D glasses. But I digress.

So yeah, let us sit back and enjoy this moment of three black leads in a superhero movie, all kicking so much ass.

Marvel Studios/ Disney: this is what I’ll say to round this part of the discussion up: we need some sistas in here. You’ve had 8 years, and the only prominent ones I’m seeing are Rosario Dawson’s Claire Temple (Daredevil, Jessica Jones), and Pascale Armand’s Akela Amador (Agents of S.H.I.E.L.D). 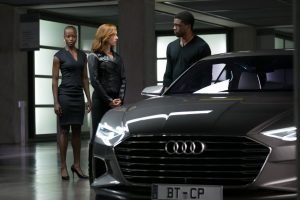 Now you have the collective attention of the world on women of color in this universe with just one kick ass scene, and five words: “Move or you will be moved”. Though the actress Florence Kasumba, is only credited as “Security Chief”, comic fans like myself are of the belief that she is a member of the Dora Milaje, a group of highly trained female warriors/ security team members who serve as Black Panther’s personal body guard.

You’re on the right track on this front. Just keep it moving in that direction, and widen your scope to include women from all backgrounds.

Last thing I’ll say, is stay around for the credits. Just getting a tidbit of Wakanda had me wanting more, and hell, I would’ve been good if another half hour was spent just walking around the technologically advanced country. 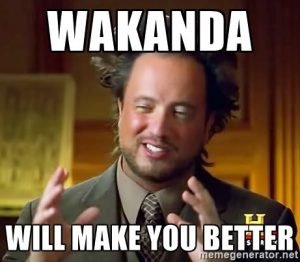 Courtesy of some nameless awesome fan of Wakanda