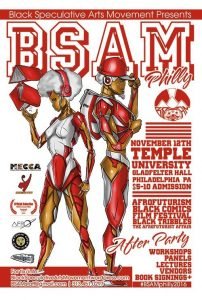 Our main annual convention, co-founded by associate professor and chair of the Humanities department at Harris-Stowe State University, Reynaldo Anderson, and founder of Midwest Ethnic Convention for Comics and Arts – MECCA, Maia Crown Williams, will include vending from a vast amount of comics, art, and artisan creators and vendors, live performances, a full international film festival via Midwest Ethnic Convention for Comics and Arts – MECCA, seminars, classes, hand on workshops, plays, and much more. Students are also welcome to submit proposals to participate as well.

As a part of the event BlackSci-Fi.com will have a table at the event and moderate a panel called Our Voices, Our Imagination on November 12th, 2016 from 4:15p-5:00p.

This panel is a discussion on the experience of being a Black SF writer/artist/publisher. Our panel will discuss the creative process and what it means to project one’s creativity into the future, the challenges one faces as a minority in the industry and ways for getting our voices heard anyway, and we will also showcase the current projects shaping the future of Black Sci-Fi.

Stacey Robinson, an Assistant Professor of graphic design at the University of Illinois and He is part of the collaborative team “Black Kirby” with artist John