Guns Down, Comics Up
0 Comments

This article is dedicated to all the victims of gun violence and to the families that have been shattered by the carelessness of those who traffic in death. 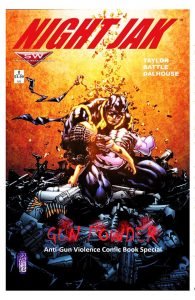 Artwork for cover by Eric Battle Color by Andrew Dalhouse

Back in the 80’s I remember when DC and Marvel both did special comics to bring awareness to the relief efforts that took place in Ethiopia. In general, comics have always been there to help put a spotlight on social issues like Green Arrow with drug abuse, or Iron Man and alcoholism. I’ve also seen independent comics that dealt with bullying. Sadly the timing of this interview followed in the wake of yet another social issue that needed addressing.

A week after the shootings in Orlando I went to a comic book shop near Times Square, not to cop the latest comics but to catch up with Superhuman Works President and Publisher Rob Taylor. We met to talk about the issue of gun control and the connection to his upcoming gofundme comic book Night Jak: Gun Powder.

This timely comic takes on the issue of gun violence. When guns start flooding the streets of Chicago, our hero Night Jak makes it his mission to take down the illegal arms dealers, keep the guns away from the gangs, and save the kids who fall victim to this social plague.

A 25 year comic veteran, having worked for Marvel, DC, and Image Comics, Taylor’s crowdfunded book will tackle what is tragically not a new topic. Using Night Jak: Gun Powder as a pulpit to speak on the subject of gun violence, he told me, “Night Jak issue 10 was originally going to be an anti-violence book, but being that all the gun violence has gotten worse, I wanted to push the book forward. So I turned issue 10 into issue 0, to start the series and there it’ll lead into issue 1.”

He wants to have the finished comic out before New York Comic Con in October, but the subject matter of the comic is currently touching young teens and adults, getting into schools and colleges that he thinks will actually help in all of our communities dealing with gun violence.

Besides the comic, Taylor is working with organizations like New Yorkers Against Violence and Moms Demand Action to bring awareness to this issue by marching and making as much noise as possible with projects like this. For Taylor “…sadly, right now this is the best time for something to come out. We just dealt with the shooting in Orlando and people need a voice. I’m thinking this book could be everywhere, especially in our community because our people face gun violence, every month, if not every day.” The ultimate vision is to help all people stay safe from this epidemic.

In order to bring this message to places beyond New York Comic Con and give a voice to the people, he needs your help. Please take part in this positive social cause by visiting Taylors Anti-Gun Violence Comic Book gofundme page for more information.

George Carmona 3rd is an Artist / Designer, former Milestone Media Intern, former DC Comics paper pusher, book lover, and lifelong comic geek. You can find his work at FistFullofArt.com or follow him on twitter at GCarmona3.