We here at BlackSci-Fi.com want to say congrats to Amalgam Comics & Coffeehouse owner Ariell Johnson on the one year anniversary of her appearance with Riri Williams, a.k.a Iron Heart,  on the variant cover of Invincible Iron Man #1. On December 2nd the store will celebrate with a one year anniversary book signing of the variant cover, and is inviting fans out to have a fun night with fellow Amalgam and Riri Williams fans.

Focusing on a central theme of the piece of art (#blackgirlmagic) Ariell spoke with BlackSci-Fi.com last year about the increased awareness of black girl nerds in an interview with correspondent Tiara Jante.

“When asked about her views on the budding social movements online such as “black girl nerds” or “black girl geeks” Ariell doesn’t think it’s anything new.

“I think people of color have always been a part of the geek community. It’s not like one day black people just started reading comics, I think we may have been a little more isolated in the past, especially when it comes to black girls—it’s possible you just may not have known many black girls who are into that. The internet is cool though, because it allows people to join various groups and get to know people that have these same interests. It’s easier now to find each other.” 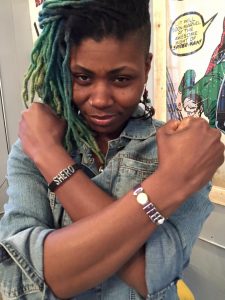 Randy Green, a member of the brain trust behind Philadelphia’s Amalgam Comics & Coffeehouse, talked about how the cover came to be in a separate interview with BlackSci-Fi.com.

“When Marvel does these store variants, they’ll reach out to any number of stores and say they’re “…interested in doing this, would you like to be involved?” And we almost said no because of the numbers they were looking at, the competition (comic book stores) does it all the time. They’ve got that kind of money, but we’re still relatively new to the game and we were hesitant.

Then we were thinking about it and we thought these things are a pretty big deal, let me reach out to the guys at Marvel, fix some of the numbers and make it work. We were able to spread it out over a bit to take care of the cost and it just had to get done at that point. They offered us three different artists; Larry Stroman, JJ Jones and Elizabeth Torque. I recognized her name (Torque) looked up her artwork and I was like “this is fantastic so let’s go 3 for 3” with this one.

And I’m glad they went with the idea of Ariell because she’s very important to what’s going on in the industry right now. I love the fact that I have a 13 year old daughter, and she’s been a comic book person her whole life. But there are little girls like her whose dad maybe isn’t a comic book guy, but now they’re seeing Ariell and Riri.

Ariell tells this story about how in the 90’s, she saw Storm in the X-Men cartoon and was like “wow we’re superheroes too” and for that to be continuing and perpetuating on any level, to be part of that, feels really good.”

Head here for more information about the December 2nd event.