A little over two years ago, Ryan Sellers and Rico Salam decided to adapt Get Mine or Get Naked, one of 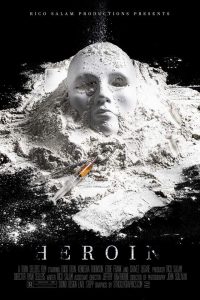 Salam’s urban novels, into a movie.  A little over two weeks ago, BlackSci-Fi.com decided to cover the red carpet for its release. I packed up and headed for Pennsylvania with mixed feelings about covering a film about heroin addicts and drug dealers, but I did reach out to Salam and Sellers before I did. I wanted to get a feel for their connection–if any–to the sci-fi genre.  While Salam readily admitted that it was never his thing, he told me that Sellers could “talk for hours about that stuff” so I reserved a glimmer of hope for the interview.  As it turns out, the young director is a certified sci-fi enthusiast, and after seeing the hundreds of people that turned out to the historic Keswick Theater for its premiere, and thoroughly enjoying the film with my BlackSci-Fi.com colleague, I think that Salam and Sellers contrasting tastes made Heroin: The Movie the gritty, genre-bending film that it is.

I spoke with Salam a few days before the event, and with Sellers on the red carpet. Both times, I asked the same first question.  It’s one I thought would tell me a lot about them, and I was right. After I asked it of Salam, he repeated it to himself and laughed before venturing an answer.

“If I could choose to date a zombie, a vampire and a…what?” Salam had forgotten my third choice.

He paused then said, “No one wants a zombie. That’s just nasty.  I guess I’d have to go with the vampire.  Something about a vampire is sexy, I guess.”

“They don’t age and can’t have kids,” I told him. “Men tend to choose the vampire.”

“Damn. Really?” asked Salam. “Well, like I said.  I’m not really into this stuff. Ryan is the one you need to talk to about that. That’s really his thing.  I just write the stories.”

“Tell me about Heroin then,” I said.

“I’m from West Philly and I basically grew up in a house full of fiends.  The only person who was straight was my grandmother,” said Salam. “My aunts and uncles were always getting into trouble with drug dealers, and sometimes they would come to the house.  She was the one who had to pay them.  I mean, sometimes she’d be giving up her check for months at a time to pay down their debts.”

“Sheesh,” was all I could manage.  Salam continued.

“Yeah.  So that’s how the movie came about.  Originally it was called Get Mine or Get Naked but we changed it to Heroin because we’d go speak about the film to schools and different places, and, I don’t know. I just felt funny calling it that when I spoke to kids,” Salam chuckled.

Sounded good to me.  Salam and I exchanged pleasantries and I didn’t hear from him again until I was on the red carpet.  I saw his beard before I saw him.  The author and screenwriter made his way across the jam-packed red carpet to acknowledge my colleague and I before pointing out Sellers.  The baby-faced director looked like a highschool kid going to prom, but the adulation he received from the droves of movie goers filing into the Keswick Theater let me know he was the man of the hour.

After heading into the vestibule of the theater, Sellers answered all of my questions–thoroughly.  He answered the best one first, of course.

“Hmm,” Sellers paused. “I’d have to say alien. But I have to ask, what kind of alien are we talking about here? Are we talking Mass Effect aliens?”

“Ok. And I’d never go near a zombie, by the way.  With a vampire…too much stuff comes with that.  Like, I know I wouldn’t stay human for very long. But aliens?  I think I could learn a lot from an alien.”

Salam was right. This guy was into sci-fi.

“If you could do a zombie thriller, Heroin mashup as a movie, what would it be like?”

Sellers laughed. “I don’t know that I’d do that, but I did do something like that in film school. It was about people turning into zombies from drinking coffee.”

I nearly offered a joke about how he’d need licensing rights to tell my life story if he ever released that film, but I decided to move on, instead. There was a line for pictures and handshakes forming behind the guy.

“Would you ever do a purely sci-fi film?” I asked.

“Actually, I did. It’s sort of a Star Wars fan film with light sabers and all,” Sellers beamed. “I really do love sci-fi. I’m all about the genre.”

I was impressed.  The only thing more impressive was Sellers’ explanation of Heroin.

“I want to bring awareness to what an epidemic heroin is on our communities,” said Sellers. “If people walk away from the theater vowing never to touch the stuff, then we’ve done our job.”