Elite Dangerous by Frontier Developments is the definitive spaceship simulation experience on consoles today. This massively multiplayer online experience allows players to take control of their own spaceship within the Milky Way galaxy and make a way for themselves via trading, mining, transporting goods, pirating, bounty hunting, or any and all combinations of those items.

The game starts the user off in a random starbase within the galaxy with a small ship and a few credits. From there, the entire experience is up to the user to control. There are many factions looking to use the player’s skills, from trading guilds to military factions. It is up to the player to determine how they should accrue funds, and each method comes with its own risk. For example, if the user decides to haul cargo in their ship for a quick buck, they may expose themselves to pirates that want to steal the cargo for their own purposes. Or, if the player decides to be a pirate and steal other player’s goods, the higher a system can push their bounty exposing them to the wrath of bounty hunters. Elite Dangerous is truly an open world experience. 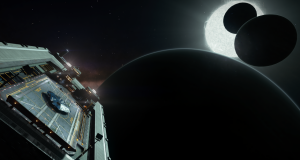 The entirety of the Elite Dangerous experience is from the first person perspective of the cockpit of the player’s ship. The control scheme to pilot one’s vessel is quite complex, however, the complexity adds to the overall immersive experience. There is nothing quite like the feel of a space battle from the first person perspective, flipping around with retro rockets and dueling with lasers. The Horizons expansion gives the players the ability to land on planets and use a land rover vehicle to explore areas for mining minerals, or complete mission objectives.

There is something peaceful about cruising through the Milky Way in a starship, admiring the planets as one passes by them. Elite Dangerous will not wow with its graphical prowess, but a space environment isn’t one that will give many opportunities to show this portion of gameplay off. However, lighting effects really work for this game. The way antennae from a starbase become more visible as a ship gets closer, or the jumpjets of a fellow pilot’s ship can really be showcased in the background of blackness. Entering and exiting atmospheres of planets is done well, allowing the player to really feel a sense of scale as the ground rushes up or recedes from the first person perspective. 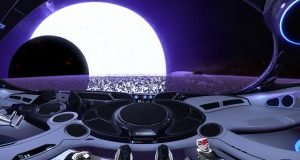 Elite Dangerous is a great game that does a few things relatively well. Frontier Developments designed this game for a certain niche and it excels in all of those areas. If you have ever dreamed of having your own spaceship and piloting it around the galaxy, give this game a try.

Elite Dangerous can be found on the PC, PS4, and XBOX One systems.