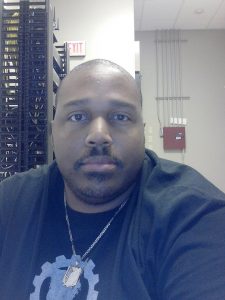 BlackSci-Fi.com: Tell us a little about yourself, where you’re from, what’s your occupation?

BSF: How long have you been a Star Wars fan?

GH: I was actually born six months after the original Star Wars came out and I think it was the first or second film I ever saw.  I saw The Empire Strikes Back at age of 3, and I think I saw Star Warswhen they did the first re-release in either 1978 or 1979. So Star Wars has been with me since I was a baby.

BSF: How did you get into your fandom?

GH: I loved it (Star Wars) from the very beginning and it opened me up to the world of Sci-Fi in general. Growing up as a kid in the 80s, there were TONS of other ways that got me engrossed further.

BSF: What would you say speaks to you the most about Star Wars?

GH: Star Wars, for me, was that epic adventure that you would have with your action figures in your head.  Seeing it brought to life on that scale and seeing those things that you’ve imagined and even read about in comics just gives you a rush that can’t be explained.  Plus, it was always fun imagining that we had light sabers as kids, using sticks, old brooms and mops that we broke, recolored, and made the sounds ourselves.

BSF: On a scale of 1-10 how excited are you for Star Wars: The Force Awakens?

GH: I’m at a 20 right now!!!  I’ve avoided all of the so-called theories about characters, the TV trailers, etc. I want to go in as that kid that first saw Star Wars, The Empire Strikes Back, andReturn of The Jedi with wide eyed excitement.  I want to be completely shocked and amazed by everything that’s going to happen with not only the movie, but the new trilogy as well, and all of the off-shoots that are coming down the line.

BSF: How do you “reflect” your fandom? Are you a comic book collector, apparel, watch movies/ TV shows?

GH: I’ve never been an avid collector, mainly because I could never afford to do it on a regular basis.  Though as a kid I had a good portion of the figures along with my brother.  We’ve had X-Wings, and I believe I might still have the original Ewok Playset somewhere (or at least pieces of it). I even had the Speeder B 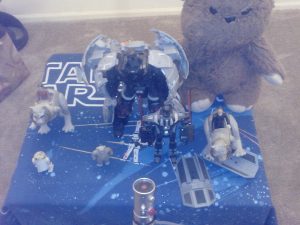 But the Holy Grail that we never had was the Millennium Falcon. That was the pinnacle of all the kids that loved playing with Star Wars and if you had one, you were the one that got the jealous stares on the playground or in the room when they broke it out.  I also had the old record/tape and book set for all three movies that came out.  Looking back on things now, I never really realized how much Star Wars was a part of my life.  I mean, if the movies come on now, I’m more than likely to stop and watch.  I do have the DVDs, but I need to pick up the Blu-Ray Collection for the extras.

One of the things that I have that I still cherish to this day is the Ewok Wicket Plush figure that came out back in 1983, though I lost his cowl a long time ago and have yet to find a replacement for that.  And yes, I am not ashamed to say that I was one of those kids that loved the Ewoks (I still am)!!! 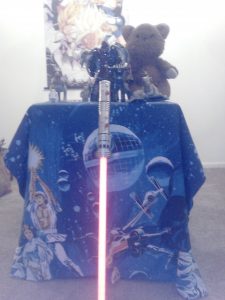 For Christmas last year, I bought one of my younger cousins (who is also a huge fan) his ownUltimate FX Light Saber, and of course I got myself one.  Earlier this year I went back home to Memphis and we had a battle in his living room. He couldn’t have enjoyed it more (so did I for that matter).  Since he has not seen all six movies, it’s my duty as an older cousin to help alleviate that problem and so I’m deciding how I best want to do that.