I’m not going to lie: I’ve recently been a bit addicted to Pokemon GO. The hilarious thing about this is Pokemon has never

been one of those anime/ video game franchises that I’ve delved into much, but with the release of the mobile app/ time consuming addiction, this thing has me hooked.

The game allows to you use an augmented reality system to search for and capture various type of Pokemon creatures, and the app has swept the world since its release. During my time spent recently on Facebook I came across Mario Reid, a guy who I’ve deemed as an expert Pokemon GO player. In addition to being a kick butt Pokemon GO master he’s a talented cosplayer, and a 3D animator for CNN.

F0r our continuing IAM Black Sci-Fi coverage of our readers, Reid recently took some time to sit down and talk with BlackSci-Fi.com about his Pokemon Go fandom, and his cosplay career. Side note: For a fun bit of trivia, Reid’s (a member of Team Valor) at level 25 in the game, and his number of Pokemon caught are 133/134.

Robert Jeffrey II: Talk a little bit about how you got involved in your Pokemon fandom. 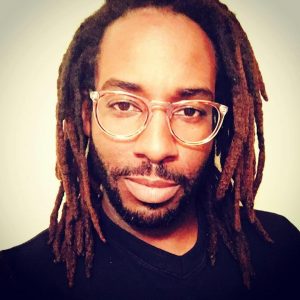 Mario Reid: It all started with my first Pokemon game. Me and my cousin got the Red and Blue version when they came out (mine was Red). Since I loved video games and especially the Pokemon cartoon I was hooked instantly. We would battle each other every chance we got, until I started getting into it more than he did. When I finally tricked him into trading me to evolve a Gengar it was downhill from there!

RJ: How far back do you go with watching the animated series/ films, and playing the original
Game Boy games?

MR: I watched the very first episode and played the Red version when it hit the US.

RJ: What do you like the most about Pokemon Go? Do you find it provides more “interactivity” with the world of Pokemon than the video games, or animated series/ films?

-It successfully integrated the Pokemon world in the mobile platform without cannibalizing the
main franchises.

-It provides me with a sustainable motivation to get up and walk, and explore new places. I
cannot tell you how many local parks, rivers and community areas I have discovered since
playing. I think about every other morning how I watch the sunrise over a morning Poke’ walk,
something that I had previously not done. 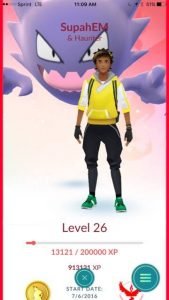 -I have interacted with more people out and about than I have before the game launch as well.
Some are fellow Pokemon players who eagerly share their knowledge or join me on a hunt, and a
lot of times its people who don’t play and are wondering what the heck is going on.

-I don’t feel like the world is as “interactive” as we hoped. 90% of the game is essentially swiping the screen at Pokemon. Now that part is nice, but Pokemon is more than just catching Pokemon (creatures). If I had to be honest it seems like more of an expanded safari zone form the Pokemon games.

Niantic has done a great job of incrementally expanding the game, so this is more like a temporary feeling about the game. Changes like the Pokemon appraisal, improved tracker, future plans on trading, and 1v1 battling will make the game seem more immersive. There is also an opportunity to add new game mechanics to the Pokemon universe such as Pokemon’s moods towards the trainers, mini games for training, or learning new moves etc.

RJ: What’s your opinion on folks who are pretty new to the Pokemon franchise that are experiencing Pokemon Go for the first time? Have you seen someone walk into something playing the game 🙂 .

MR: New players for the most part are wonderful to watch! They have the same look in their eyes as I did when I was first introduced to the game. Most are enjoying this new little addictive game and everyone that I have a chance to talk to, I try to help with knowledge that helps them enjoy it more. I haven’t seen anyone do anything crazy but there are groups that camp out in local hot spots for Pokemon and people who are not in the know think that they are crazy!

RJ: As a gamer and as a fan of Pokemon Go what do you hope that Nintendo and Ninantic bring in the way of future updates/ upgrades?

MR: Well here is a nice list of what I want:

-New Clothes for your avatar

-Team Rocket (or similar team) In the form of an event that allows the teams to battle and
overcome them for rewards.

-Leaderboard of some sort 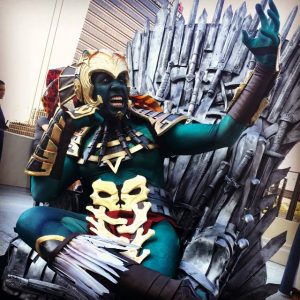 RJ: Are there any tips or tricks that you’d suggest to fellow Pokemon Go players in terms of battling or Pokemon hunting?

MR: Here are a list of tips I would offer:

-ALWAYS be hatching an egg. Keep your 2k eggs in your unlimited incubator and hatch the others in your bought incubators.

-Be on the look out for known nests. They will help you complete your dexterity.

-Learn to curve the ball to increase your capture rates and aim for the colored circle.

-Battling Pokemon: Be on the lookout for a yellow flash in the corner of your screen when battling this will indicate that the opponent will attack, dodge after the flash it will work every time.

– Pokemon hatched form eggs are generally more powerful that ones caught in the wild.

– If you are having problems with getting special items remember that every day the game will award you free gold!!! For every Pokemon that you have controlling a gym you can get 10 gold and 500 stardust. Find a few gyms that no one really takes over often and you can rack up 100 gold and 5000 stardust EVERY DAY!

RJ: I wanted to ask about your career as a cosplayer. What got you into cosplaying and how long have you been doing it? 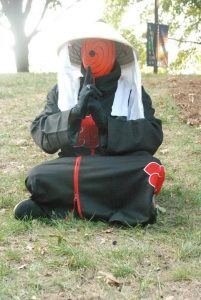 Reid as Tobi from Naruto

MR: I got into cosplaying around 6 years ago and I really got into it on a whim. I had been attending Anime Weekend Atlanta for some time and one day I wanted to cosplay. So at the con I bought everything I needed to cosplay Tobi from Naruto and I have never looked back! The convention experience just isn’t quite the same without being in cosplay. Everyone wants to see you and your work. You meet so many wonderful people from all walks of life and it makes the conventions feel like a holiday. Since then I have learned how to craft my own costumes and I run a cosplay group with my friends called THAR Cosplay.

RJ: Talk a little bit about THAR and the other cosplayers involved. What are the benefits of working with a group of cosplayers, rather than just going solo?

MR: Well THAR Cosplay was created by my friend Kwame Amuleru who started cosplaying around the same time I did. Since then my friends Jacolby Chatman (the other half of the Kombat Bros) EddiePlatt, and Simmeyon Strickland joined later. We are all artists who love to work with our hands and cosplay is a great outlet for this. Cosplaying in a group has many benefits over cosplaying alone I think. One of the immediate benefits is the support system. I have a group of guys who are willing to lend a hand on a difficult cosplay or share some knowledge about a material or a technique. We all have strengths in different areas so its nice to have the help. 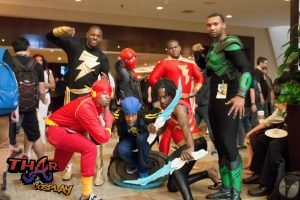 Also having a group lends itself to group cosplay! We are known for our Mortal Kombat cosplay groups and the moment we stop for a picture we are sure to be holding that pose for about 20 mins! Sometimes members of our group are just there to be a spectator and often lend a hand carrying personal items and helping out with getting in and out of difficult cosplays.

RJ: Is there one cosplay/ outfit of which you’re most proud?

MR: I was most proud of my human Cyrax cosplay from MK9 (Mortal Kombat 9). It was my first attempt at sewing and so many people came up to me happy to see their favorite character realized. Not too many people cosplay the human Cyrax. We even went to Final Round this year and were featured on the stream in the tournament! 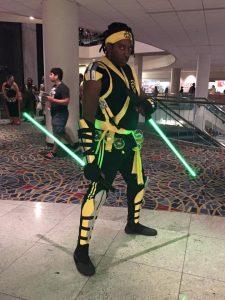 RJ: By day you’re an animator for CNN. Do you find that you’re able to flex your creative muscles at the ‘ole 9-5 in the same way that you do as cosplayer?

MR: I am able to flex my creative muscles at CNN but within reasonable limits. I have to provide satisfactory end products for our internal clients and I cannot go crazy a lot of the time due to restrictions and precautions that allow us to provide the best experience for our viewers.

Cosplay offers a nice creative outlet where I can experiment with mediums that I do not often work with at my job. As a designer and animator my world is primarily digital. If I make a mistake then I just undo and redo until it is perfect. Working with tangible materials allows me to use my knowledge in illustration, design, color theory, and 3D but it also takes me away from the screen and puts me in a place where i have to think about materials and plan ahead of time. Here, in this world, I cannot just undo a mistake so it adds a level of challenge not often found in the regular 9-5. Plus its very therapeutic!

RJ: Where can folks find out more about you, THAR, your love of Pokemon Go, and your career as a cosplayer? 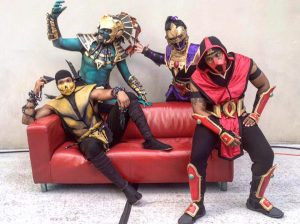