Milton Davis and Balogun Ojetade founded the State of Black Science Fiction (SOBSF) Facebook group in 2012 as a space for black authors, illustrators, filmmakers, animators, and other purveyors or enthusiasts of speculative fiction, science fiction, fantasy and horror to create and maintain a dialogue on the genre. The founders of SOBSF, a group which now boasts nearly 8k followers and is rapidly headed toward the coveted 10k mark, also founded Black Speculative Fiction Month, which is observed in October. 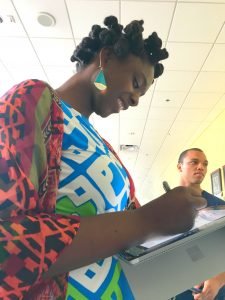 Luckily,-fi heads who connected through that group didn’t have to wait until October to connect with each other this year, because Davis, Ojetade, and a stellar team built on the success and connections they’d made from their previous endeavors to kick off the first State of Black Science Fiction Convention (SOBSFCON) this past weekend (June 11-12). The sci-fi themed convention packed with panels, art, workshops, music and food took place in the Southwest Arts Center in Atlanta, Georgia and proved that the Facebook group’s savvy founders were not only ready to spread the gospel of black sci-fi and speculative fiction beyond the digital realm, but that they had enough influence to get it done.

Two days’ worth of panel discussions like Black Women In Speculative Fiction, A History of Blackness in Speculative Fiction, and The Pinnacles and Pitfalls of Self/Small Publishing were held in larger art rooms, while workshops on African martial arts, talks about video games, and kid-friendly yoga sessions were held in the center’s smaller spaces. Vendors filled the entire corridor of its theater building, and another large dance studio just through the double doors of its art studio building. The theater drew scores of excited kids on the first day as JeGhetto’s Puppets (a trio of young creative collaborators from North Carolina) put on an afrofuturist, hiphop themed play complete with DJing, dancing, and puppets -of course. 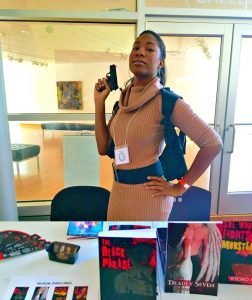 As adults and children found their outlets of entertainment, novels, comic books, and art continued to fly off vendor tables all weekend, and a choice between vegetarian Caribbean food and Southern soul food provided satiating relief for patrons who dreaded traveling by car to the nearest food stop—which might as well have been in a galaxy far, far away. Despite being rather isolated on Cascade Road, the art center’s two buildings connected by a short breezeway actually proved to be the perfect size for SOBSFCON, and the venue buzzed with excited patrons for the duration of the convention.

If the heart of the conference was its panels, staffed with well informed, talented creators from every type and subgenre of speculative and science fiction, then the vendors were its soul. Sellers at SOBSFCON were their own seasoned panelists who represented their works with beautiful, sometimes interactive displays. Cosplayers made their colorful entrance one by one, pausing for pictures and to give explanations of their costumes. Few could resist trying their hand at the free swordplay tutorial offered at one vendor’s table. Another vendor offered visitors the chance to render a digital drawing and receive a printout of it at his table. Comic book creators, authors, and graphic novelists engaged with each person that visited their table. 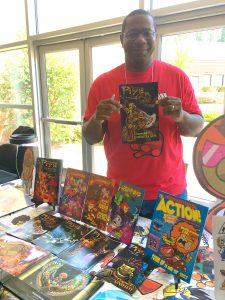 If no sale was made, they merrily shared online information and posed for pictures instead. The scavenger hunt, which involved a search for items and a little social media engagement, was also a huge hit for convention-goers of all ages. There were very few frowns at SOBSFCON, with the exception of some Square card readers that tested the patience of vendors and patrons alike when they failed to calculate transactions upon first swipe. But this was a sci-fi convention and stranger things have happened. At the first annual SOBSFCON, strange wasn’t a problem at all. 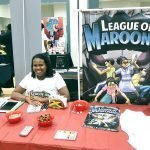 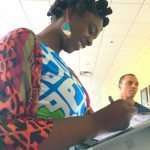 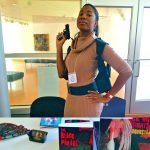 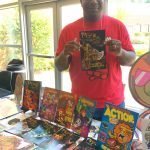 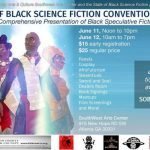