With the current media frenzy over a national scandal on a case of indeterminate racial identity, (i.e., Ms. Rachel Dolezal and the NAACP), it seems like the perfect time to look back for similar episodes in historical comic books. For a country that prides itself on openness and full disclosure, America has a very poor record on the discussion of race in general, let alone a more specific one on racial identity, Perhaps comic books can offer us a perfect forum for such a discussion.

For purposes of this column, I have chosen a few highly visible examples of racial ambiguity, as well as a few examples that are not so well known. 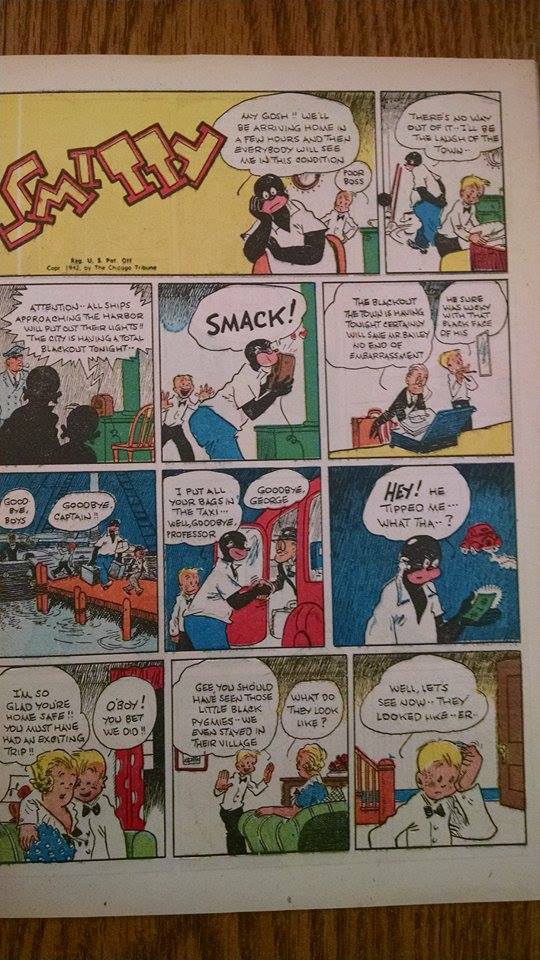 A White character frequently featured in Dick Tracy comics, Smitty, suddenly appears with both his hands and face Black. He supposedly got that way from getting dyed “Black” by a tribe of African pygmies. The whole gist of the story revolves around his discomfort at being perceived by his workmates and others as a Negro.

It’s a five page story where his racial identity is in question, even when the origin of the problem is unlikely. He is given a tip when he helps someone with his bags, and he is called “Sambo” by a co-worker who doesn’t recognize him. He recovers by staying in a darkened room for one day and his whole racial identity quandary is resolved without further incident. If only the issue of race in reality could be cured that simply. 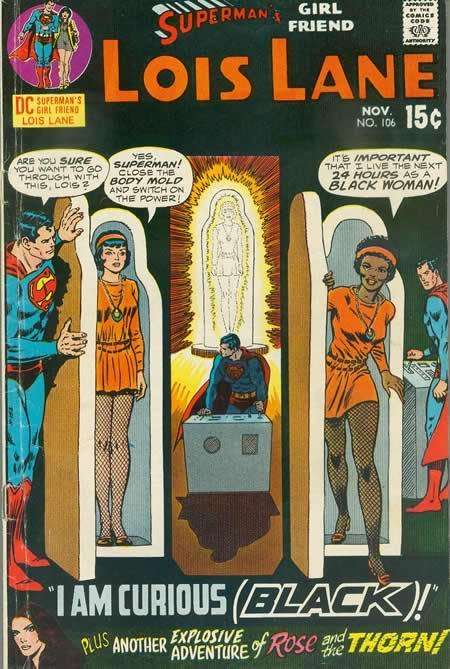 She has a reporting assignment where she must interview members of the Metropolis community known as “Little Africa,” read Black people. But when she arrives she is universally shunned by everyone there. It is because she’s White? Lucky for here her boyfriend is Superman who has a device in his Fortress of Solitude that can transform her skin color. The story ends with a cliché’ when a life-saving blood transfusion from Lois to a Black Man cements their relationship. DC Comics and others comic book companies often used this same dramatic device of a blood transfusion make a statement that we are all alike where it really matters. 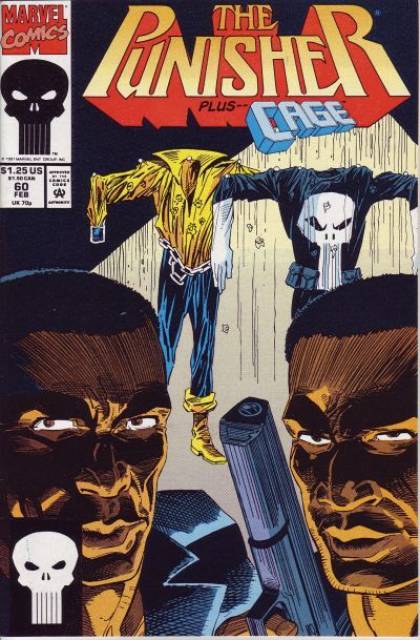 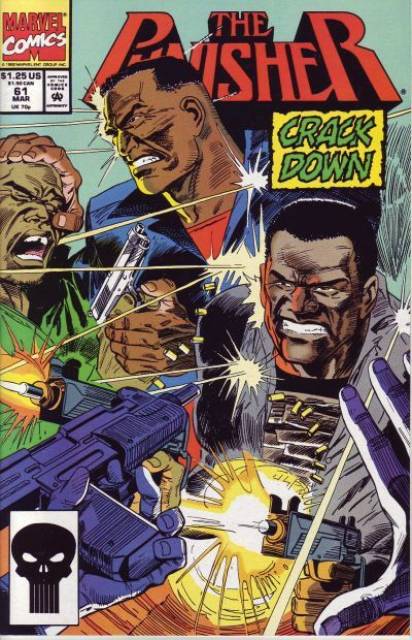 In what has become known as either the silliest episode of racial transformation in comic books history, or the most daring, the Punisher in an attempt to hide from his enemies, turns Black. Not only that, he actually fools a number of Black and White people including a bunch of racist cops and a Black superhero, Luke Cage, with his impersonation. Aside for a few bad racial jokes, this tale can be perceived as a fairly unremarkable episode of racial pandering. 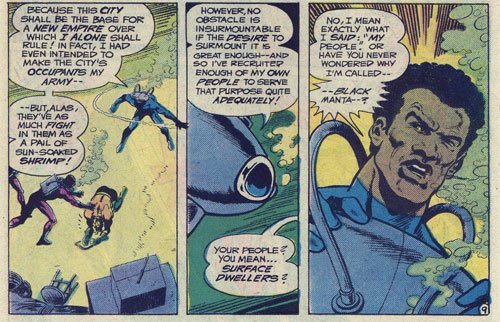 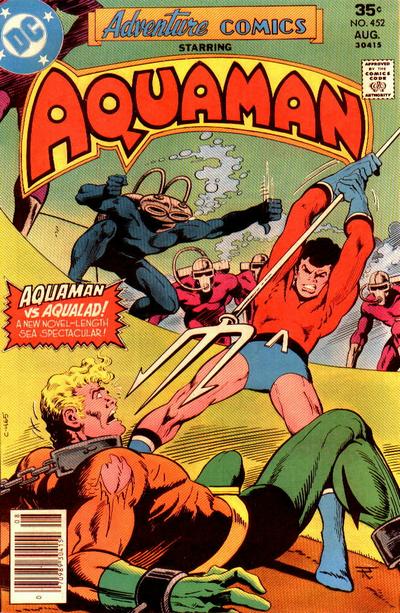 Ambiguous racial identity has to include someone who you perceive as belonging to one race when in fact he or she is another. This quandary would have to include one of Aquaman’s arch enemies, Black Manta.

He was first introduced as a character in 1967, but was not revealed to be a Black Man until ten years later. I can only imagine this was part of some larger strategy on the part of DC to provide Black Super Villains as well as a roster of Black super heroes. 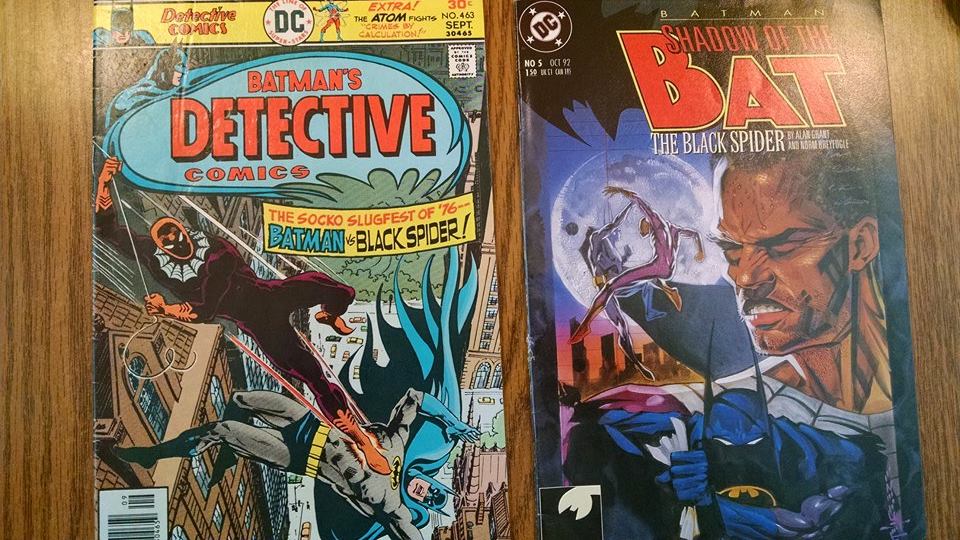 This is going to sound as if I am repeating myself. But DC Comics also had another masked African American villain, Black Spider, whose racial identity was not revealed until 16 years after his introduction. It’s like the old showbiz expression, ‘If the audience liked it once, they’ll love it twice.” He is first presented as a mad sniper who kills without mercy. It is later revealed that he is a recovered drug addicted father with a son who is seeking revenge against drug dealers.  He dies dramatically in 1992. 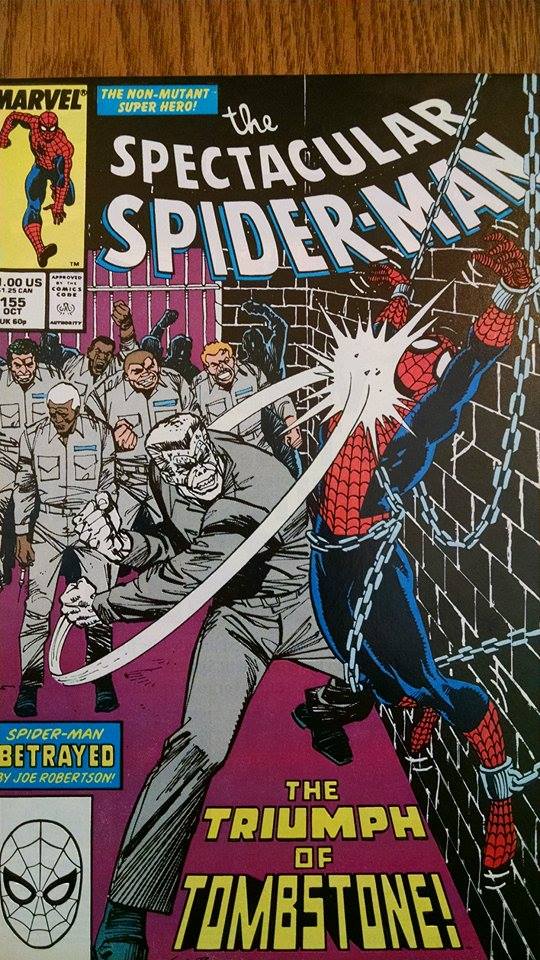 Lonnie Lincoln, nicknamed “Tombstone,” was first introduced as a cold blooded contract killer in 1988. His place this discussion holds a unique position. In considering racial identity, we rarely include those individuals who appear to be both Black and White. I am referring to a little spoken of topic, Albinos – people who are considered Black but for appearance looks White in the extreme. In literature as well as in real life Albinos are treated with a great deal of suspicion by both races. In a classic series of comics, Tombstone’s unknown connection to Daily Bugle editor Robbie Robertson becomes a story about what you leave behind of your past to be successful in mainstream society. 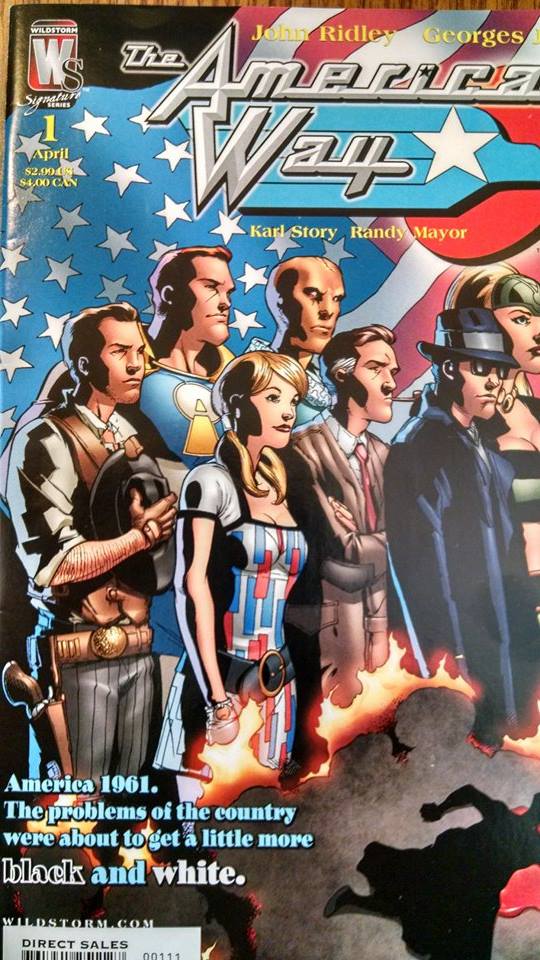 As it has been done a number of times in recent history comic book story telling. This story uses its unique position in popular culture to rewrite history. In 1961, in the real world there were no mainstream Black heroes to speak of. So why not go back in time, literally, and invent one or two through the magic of comic books?

Once again, we are presented with the idea of a superhero’s mask being used to hide racial identity. A government sanctioned program presents a super team that includes an African American. But it is decided that the American public is not being ready to accept a powerful Negro and his membership becomes a closely guarded secret. What will happen when the  that secret is revealed to an American public struggling to deal with the major issues of racial hatred and the arrival of the civil rights movement? 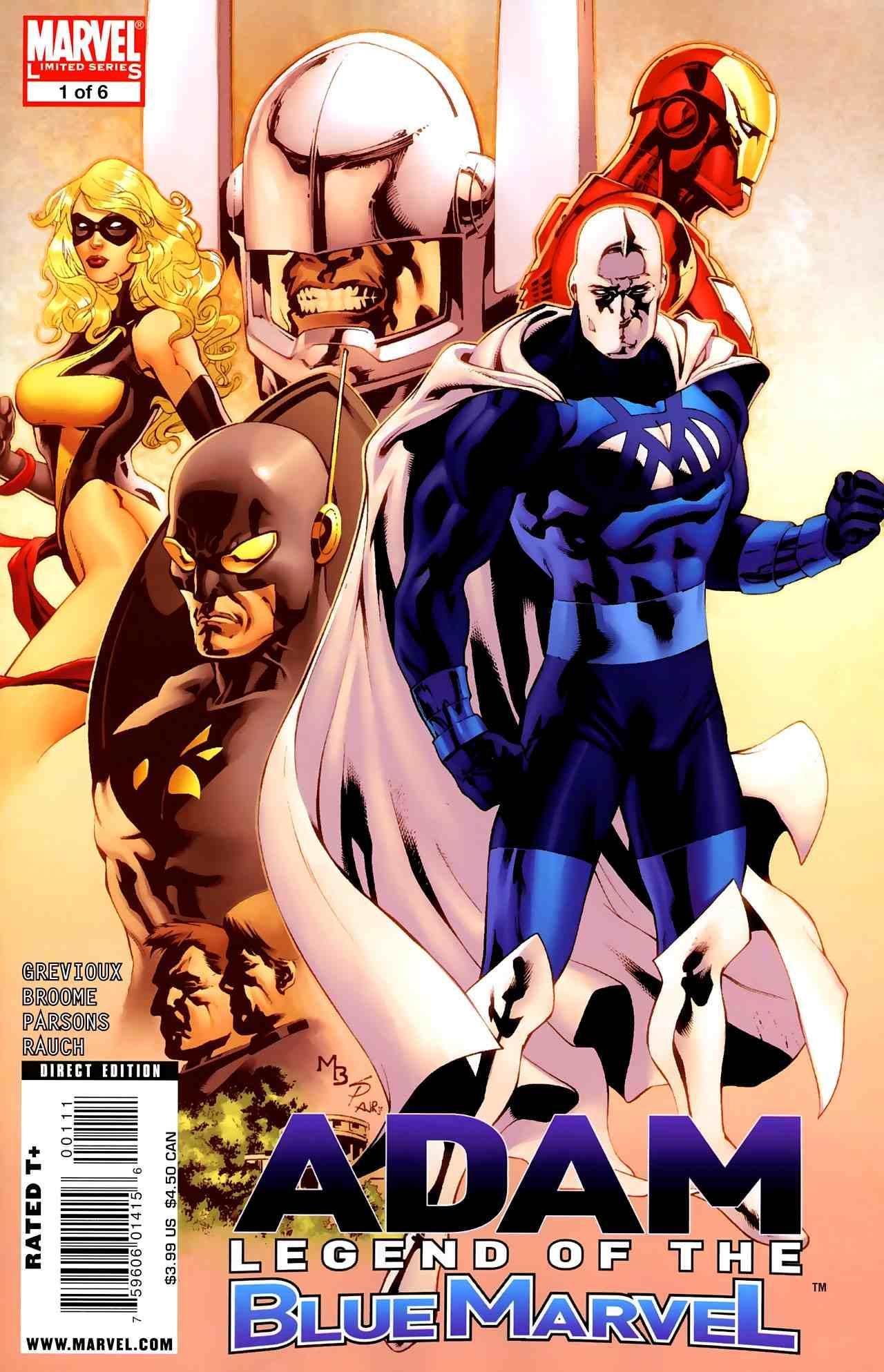 In the same vein as the revised history of Captain America, and The American Way, Marvel reinvents the past, with the creation of a very powerful a Black Superhero in 1962. He is in fact one of the most powerful beings on the planet. As previously stated, his racial identity (under a mask) is considered a security risk by the powers that be. It is decided that he needs to be “controlled” for the greater good. And. oh, and add to that, he is married to a white woman.  The story begins in the present, with the 50 plus years old secret about to be revealed. 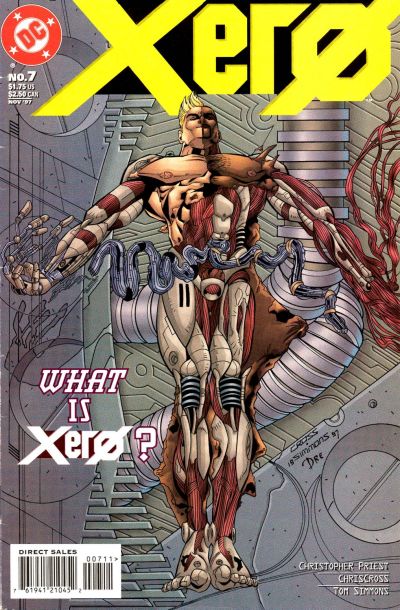 This comic book series is, in my opinion, the most bizarre take on the issue of racial ambiguity in comic books. We are given the story of a White secret agent (black bag closer) who disguises himself as a high profile Black basketball player. Hey, I don’t explain them, I just give the history.

This particular series came to use courtesy of Christopher Priest and Chris Cross, two talented African Americans comic book creators. There’s no question they were ahead of the curve in giving readers a thought provoking story about racially charged discussion.

So that’s it for my latest examination of relevant comic book history in relation to current political dialog. Please check back with us next time. I promise to make it worth your while.