Darian Dauchan’s Brobot Johnson series is a one-man web series that’s half hip-hop musical, half modern silent film, and 100% afrofuturistic. The series features a white-coiffed, facially expressive Dauchan as Brobot Johnson, a black android reanimated and kept under the close tutelage of his obsessive creator Professor Toussaint, also played by Dauchan. He sat down with us to talk about Brobot Johnson, a series that has proven itself a testament to Dauchan’s lifelong theater roots, his penchant for spoken word poetry, and his unequivocal love for black sci-fi.

BlackSci-Fi.com: How did the series come about?

Darian Dauchan: Well, I went to NYU and majored in drama, but I’d been acting since I was five. I was always into it. At NYU I developed these solo shows–I did six or seven of those on my own. After undergrad I got into spoken word really heavy. I did some poetry slams and performed at the Nuyorican Poets Cafe. After that I formed a band called Mighty Third Rail with a violinist named Curtis Stewart, and an upright bassist named Ian Baggette and we did Death Boogie together. It’s an album that’s also a hip hop musical. So that was my first foray into music. Brobot Johnson sprung from that, because I wanted to make another transmedia piece that incorporated the music, visuals and theater.

BSF: Who’re your influences for the Brobot Johnson series? When I look at the artistry that went into the look of the series, I think about SunRa’s Space is the Place, and stuff like that.

DD: Oh, definitely heard of SunRa. Actually, one of the biggest influences on me was a book I read while creating the series. It was called Afrofuturism: The World of Black Sci-fi and Fantasy Culture by Ytasha Womack. The book really encompasses what Brobot is about. Since I was already creating the series at the time, it was nice to read that book and learn that there is a language that informs this style. Also, I wanted to capture the afrofuturism vibe because what I was going for with Brobot’s character was a combo of Brother from Another Planet, Johnny 5, and Edward Scissorhands. 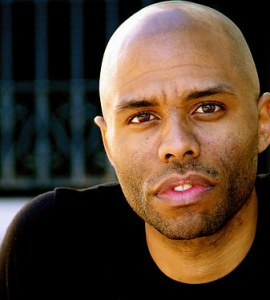 DD: All three characters have a similar disposition. They’re quiet and intuitive while they’re taking things in. I wanted to capture that for Brobot. I also watched a lot of silent film and learned from that, since there’s little dialogue in the series. So I watched a lot of Chaplin and Buster Keaton too.

BSF: How long did it take you to film each episode?

DD: I actually shot the whole series in two weeks. My idea was to shoot an episode a day in chronological order.  Of course, it didn’t work out that way because we had to work around everyone’s schedules. Luckily, a great theater company called All for One helped me adapt the music and scripts to film.  Their director of photography, Marcus Middleton, shot with me for those long hours. On most days we shot from 10:00 a.m. to 10:00 p.m. and it would just be us and a couple of PAs out there. In scenes where I needed doubles, Marcus or one of the assistants would even wear one of my suits or let me borrow their hands for a shot.

As for writing the series, the music came first. It was my first solo album and it took about a year and a half to make. The lyrics and composition were all done by me. Then it took some time to write the scripts and develop them into film, and All for One really helped with that process.

BSF: What was your process for deciding which aspects of human function would be fun to highlight for the series?

DD: For me it was about it being physical. Like, what’s the natural progression of things for a new human? For a 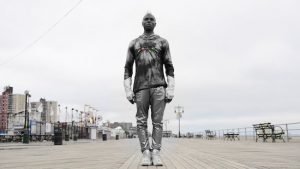 baby? Also, there isn’t really any dialogue and there was no budget for CGI so I had to pick things that translated well, but were also fun to film because of the slapstick humor side. So I picked things like walking, dancing, and eating for those reasons.

I also wanted to highlight the small things that we take for granted and make them epic. Walking and eating are

banal to us, but for Brobot, these are new discoveries.  These are miracles for him. The miracle of walking, the miracle of dancing. I like for people to remember the things that are easy to take for granted.

BSF: Are there plans to extend the series into another season? Or release them altogether as one big project with a soundtrack?

DD: There are many possibilities for season two.  I just think that those possibilities will require more funding. I know that for Death Boogie, when we took it Scotland we had a Kickstarter. But that…it took a lot out of us. That campaign was successful, though. Right now I’m thinking about new iterations.

Video games, comic books–I’m interested in figuring out what happens next with it. All for One is helping me develop it into a play right now, and we’re working out how that’s going to look onstage. One of the ideas I have for the theatrical production is to do the beatboxing and some of the other sounds with my voice, then use an RC-505 to record the whole thing live. 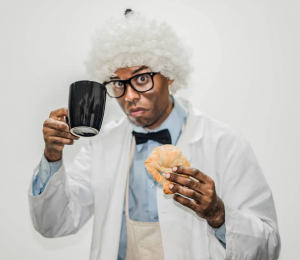 BSF: What other projects are you working on?

DD: Aside from the live show, my main focus right now is to get more people to watch and share the web series. And we’re also running Death Boogie again this fall in Ithica at The Kitchen Theater.

Stay tuned to BlackSci-Fi.com where current and future episodes of Brobot Johnson will  be featured.