Atomica is a sci-fi thriller from SyFy Films,  directed by Dagen Merrill (Broken Hill, Beneath), and featuring an all-star cast including  Dominic Monaghan, Sarah Habel and Tom Sizemor.

Set in the not so distant future, when communications go offline at a remote nuclear power plant isolated in the desert, a young safety inspector, Abby Dixon (Habel) is forced to fly out to bring them back online.  Once inside the facility, mysterious clues and strange behaviors cause Abby to have doubts about the sanity, and perhaps identities, of the two employees onsite. I recently had an opportunity to speak with director of Atomica,  Dagen Merrill, and here’s what he had to say:

Tiara Janté: Can you tell me how the film came about?

Dagen Merrill: We were looking to make a small contained film, and one of the producers came across a script that we absolutely fell in love with. We made a few changes to make it more suitable for film, and finally came up with the finished script for Atomica.

TJ: Sci-fi films are known for fantastic and otherworldly elements; elements that can be somewhat difficult to reproduce on the big screen.  Did you face any particular challenges when filming Atomica?


DM: Atomica is probably the most challenging film I’ve ever made.  First off, what you see in the film is real–there was no set.  I know Sci-Fi is known for special effects, but even during the explosion scene later on in the film–it’s all real to scale, no special effects.  We were 60 feet under ground inside of an abandoned Titan II nuclear missile silo somewhere out in 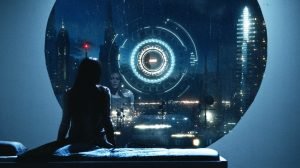 Washington state.  It’s crazy to think that where we were filming at some point was a
place where someone used to wait with their hand on a button waiting for a command to launch a nuclear missile.  It was also extremely cold down there, but our cast and crew was fantastic, and our art department really did an excellent job taking an already amazing location and making it even better.

DM: I think the one thing that stands out in this film is how the location becomes a character in itself, yet Dom’s (Monahan) character is the actual embodiment of the character.  This is his best performance, if you ask me. It was amazing to watch him work.   The space around him definitely matched his personality as a character in the film. 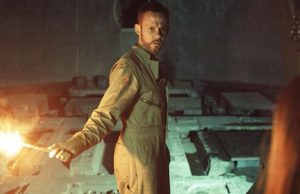 TJ: Like many science fiction films, Atomica deals with the imagined repercussions of a very dismal future.  With all the talk  about our environment and the way we’ve been treating our planet, if there is one thing you’d want people to think about or take away from the film, what would it be?

DM: I’m glad you asked that question.  I think the one thing I’d like for people to take away from the film is to realize there’s a connection between what’s going in our world and our environment and whats going on within ourself on a deeper level.  For instance, in the film Abby is out there and she’s dealing with this big problem–but the problem is inside of all of us.  If we could look inward, we’d realize all of the terrible things that happen in our world start on the inside of all of us.

Atomica is showing now in select theatres and will be available on Video on Demand and Digital HD March 21, 2017.  Check out the official trailer below.