Earlier this week I was able to chat with Joseph Illidge, Senior Editor for Lion Forge Comics, about the upcoming

Catalyst Prime superhero universe launch in May 2017. I’ve had the honor of personally knowing him for close to 20 years. He’s a writer and expert in comics, a former editor for Milestone Media Inc., Archaia, and the DC Comics Batman line of books, and a champion of diversity on the page and behind the scenes.

His style is a reflection of his business edge, he is the Dapper Dan of the comic book industry. You will never catch him slipping in jeans, on the economics of the job, and more importantly, on quality storytelling.

BSF: How did the Lion Forge Comics relationship come about for you? How were you brought into the fold and what was your influence with the creation of Catalyst Prime?

Joseph Illidge: I was doing freelance editing work for Lion Forge in 2015, and then we decided to expand my relationship to a full-time Senior Editor position. The company leadership of Lion Forge’s Managing Member/CEO David Steward II, the President Geoff Gerber, and I believe in the same things. We have the same goals, so it was pretty easy. 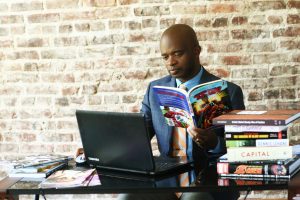 I became a Senior Editor in June. My inspiration for Catalyst Prime, which is the multicultural superhero line that I’m developing with a great group of writers, artists, letterers and colorists, is Milestone Media, Inc., a multicultural comic book company where I started my career in the 90’s.

BSF: Who are some of the writers and artists that you’re excited to be working with?

Last but not least is Desiree Rodriguez, the Editorial Assistant for Catalyst Prime, a writer with sharp cultural optics.

BSF: How did you convince Christopher Priest and Larry Stroman to come back to comics? What blackmail pictures do you have on them?

JI: It’s interesting. I met Larry in 2015 at DoDeca-Con, which happened in Missouri, and we got to talking a long time and became friends. When I was thinking about this book, created by film producer Ramon Govea and written by Joe Casey, it just occurred to me that Larry was the right artist for the book. So I made him an offer and I’m pretty happy he accepted.

In terms of Priest, he and I go way back. When I thought about someone to help kick off this universe, I thought he was perfect, not only because he is one of the most intelligent writers in comics, but seeing as how I’m Milestone alumni and he is a co-creator of Milestone, I thought it was a great thematic continuation.

BSF: What can readers expect to see from the Catalyst Prime-verse?

JI: The Catalyst Prime superhero universe is going to be 7 monthly titles, starting off with a one-shot in May 2017. All the superhero books will have different aesthetics and tones in an interlinked universe, but you’re not going to have to read all the books. We’re not going to trick you into doing that.

It’s the fusion of DC Comics The New Frontier by Darwyn Cooke and the first year of Vertigo, in which Karen Berger took superheroes and used them as the foundation for what became an instrumental line in comics and graphic novels.

BSF: I know it’s early in the development, but can we expect any cartoons or TV shows, are you looking to go that way eventually?

JI: Because of things like the Marvel cinematic universe and the DC Comics television universe, more people have fallen in love with the idea of a superhero universe and in different media. That’s definitely something to explore but first and foremost are the comics. We want to make the best comics that we can. The comics are not going to be pitches for other media disguised as comic books. They’re going to be kick-ass superhero comic books.

Stay tuned for more updates and reviews as we get closer to the May 2017 launch and follow Joe on twitter at @JosephPIllidge.

George Carmona 3rd is an Artist / Designer, former Milestone Media Intern, former DC Comics paper pusher, book lover, and lifelong comic geek.  You can find his work at FistFullofArt.com or follow him on twitter at GCarmona3.