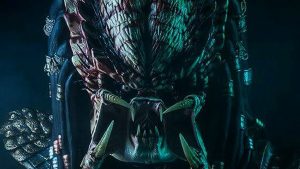 According to actor Keegan-Michael Key (Key and Peele), the upcoming The Predator film in which he co-stars  is”…not a sequel”. The film, which was originally announced by Fox in 2014 is directed by Shane Black (Iron Man 3) and just finished filming in June.  While many of the details of the film have been kept under lock and key, Peele states that “fans will not be disappointed”

When speaking with EW recently, Peele said “Predator was a real privilege to do, and if people think they’re going to see a remake of the original movie, they’re in for a surprise, A very  pleasant surprise … It’s not a sequel… It certainly lives in the universe of the five films that were made. I think that’s probably the best way to say it and the only way I can say it right now.”

The director, who appeared in the original 1987 Predator opposite Arnold Schwarzenegger and Carl Weathers, co-wrote the installment with filmmaker Fred Dekker (Monster Squad) and previously told EW he wanted to give the film an “event feel.”

“Fox has been in the habit of making one of these Predator movies every couple years, and they put them out for a limited budget that kind of guaranteed return, but they’re not really something that’s an event,” he said in a Town Hall on SiriusXM Entertainment Weekly Radio (ch. 105). “I want to try to get back to that. Because there was a freshness, I think, to the first one… It was special then, and I want to get back to trying to reinvent it in the sort of way that it acquires that event feel that makes people want to treat it like a big movie.”

While we wait for the new film to hit theatres, check out this throwback clip from the original “Predator” film (1987)