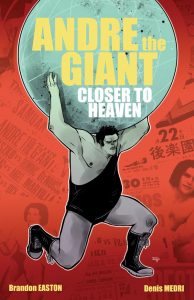 Los Angeles, CA – Lion Forge Comics and producers Scott Steindorff and Dylan Russell have partnered to develop a feature film about the life of legendary pro wrestler Andre “the Giant” Roussimoff, based on the authorized graphic novel biography published last year, Andre the Giant: Closer to Heaven. Roussimoff’s daughter Robin Christensen-Roussimoff will consult on the film and assigned the exclusive rights for the biography to the producers.

“Andre the Giant rode the wave of the rise of wrestling in America, while suffering from the painful health condition of gigantism; there’s an Elephant Man story here,” Steindorff said.

Lion Forge CEO David Steward II agreed, saying, “As a lifelong wrestling fan, I can say with conviction that no one was bigger than Andre. His presence and charisma were so powerful, and you could tell there was much more to him under the surface of his ring persona. It’s been an amazing experience telling that story in the book with Robin’s help. With all the spectacle, action, and emotion there on the page, a feature film just made perfect sense.”

Written by Eisner Award-nominated writer Brandon Easton and illustrated by Denis Medri, Andre the Giant: Closer to Heaven was nominated for the Dwayne McDuffie Award for Diversity and three Glyph Awards. It recounts the famed wrestler’s life from his earliest days working on the family farm in France along with the rise of professional wrestling itself, from a global circuit of underground matches to the global phenomenon it is today, due in large part to Andre the Giant’s celebrity. It is being republished in a new edition this month. 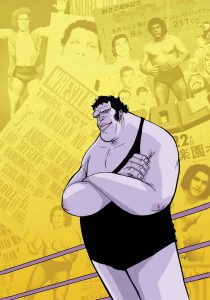 Steward and Lion Forge CCO Carl Reed will produce with Steindorff and Russell of Stone Village Productions, with Joel Falderon as a co-producer and Barry Alexander as an associate producer. Jimmy Thomas will executive produce.

“I’m really excited to watch this story come to life on the big screen,” Robin Christensen-Roussimoff said. “It’s been a labor of love for everyone involved, and we’re really looking forward to making it available to a larger audience.”

ABOUT LION FORGE
Lion Forge is a St. Louis-based new media company that revitalizes licensed franchises and develops exciting on-trend original properties through comic book publishing. Drawing on a diverse roster of talent from book publishing, print comics, animation, mobile apps, marketing, retail development, and brand management, Lion Forge titles are carefully curated and brought to market with focused attention and support. Committed to diversity in the entertainment field, and the comics industry in particular, Lion Forge aims to employ a wide array of staff and creators that reflect the makeup of our world and bring fresh voices to our titles. For more information, please visit lionforge.com or the Lion Forge Facebook (facebook.com/LionForge) and Twitter (twitter.com/lionforge) pages.