par·a·dox -a situation, person, or thing that combines contradictory features or qualities.

A paradox is definitely what plays out in the new film aptly titled Paradox. The movie was written and directed by Michael Hurst, starring 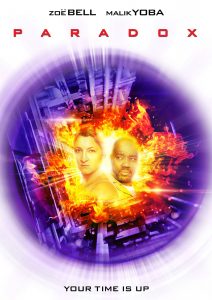 Malik Yoba (New York Undercover, Empire) and Zoë Bell (The Hateful Eight, Whip It). As the film’s summary explains, “A group of young scientists are working on a secret project that may allow them to travel ahead in time. They test it by sending one of their own ahead one hour. He returns pleading with them to shut it down, explaining that within that hour, they will all die.”

I recently spoke with Yoba about his role in the sci-fi thriller, and his thoughts on time travel in general. Though he admits he’s not much of a “sci-fi geek”, upon reading the script he was immediately interested in the concept. “[I thought] you know what? This is actually kind of cool, and for some reason I just thought I should play it with an English accent— I just added to his whole Charlatan ways. He’s obviously not who he appears to be- it just seemed like a very cool idea. I had an opportunity to speak with the director on the phone, and we seemed to hit it off, and I was like cool “I’ll come to LA and I’ll play it”. Once I got there it was cool to just bring it to life”.

In the film, Malik plays Mr. Landau, the wealthy Englishman behind the time travel project. When asked about developing the English accent he uses in the film Yoba said, “I have a ton of accents and dialects and languages and stuff I speak—especially at this point in my career, you know. I’d like to consider myself more of a character actor.”

“In fact I’m about to do a solo show called called Harlem & Hollywood where I play like 20 different characters or something—telling my life story. I’ve done plays and stuff. I’ve done it—and it’s not that many black people in London—or England sounding like that. You hear more of like a south London or a sort of lower class or working class. I tried to play him as a sort of an upper class Englishman”. 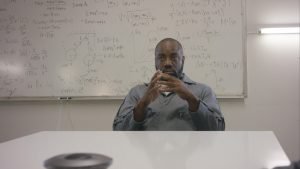 When asked whether he’d be down to time travel for real if given the opportunity, Yoba said “I’m actually from the future right now” he joked. “People [are] trying to go to the moon right now—well we have gone to the moon—but yeah that would be a trip. I think I would be down to go. So many places that I’d want to go. Yeah, I’d like to see my parents as kids.”

Aside from his acting roles, Yoba is also very much the Renaissance man—he is an actor, singer, comedian, and he even plays the guitar. What some may not be aware of, however, is his passion for people and his many philanthropic efforts. One such effort is visible in his company Iconic32, a company he says “…exist[s] at the intersection of pop culture and social goods”. As he continued to speak, it became obvious that he is very passionate about the work he does through Iconic32.

“We founded this company a few years ago—to create content, to do experiential—create events and experiences and then branding and strategy marketing. [It’s] a fun way for me to still story tell in different ways. On the content side [there’s] entrepreneurial podcasts—on the tech side we’re working with a company, TextBehind, that’s not just a tech company.” 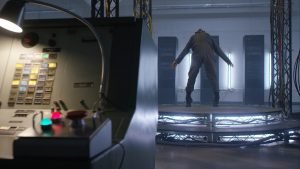 A scene from “Paradox”. Images Courtesy of XLrator Media

He then went on to explain, “they (TextBehind) provide the opportunity for loved ones to stay in contact with their incarcerated family members and friends. People talk about criminal justice reform-one of the critical pieces of that is that 70% of children who are children of incarcerated parents end up incarcerated. So a huge piece of that puzzle is the lack of connectivity that they have when the loved one is locked away as opposed to having to sit by the phone and wait for that 18 dollar collect call. Folks can have consistent communication from anywhere in the world—you don’t have to wait or send a letter.”

After speaking with Yoba, I was impressed to learn of the efforts he makes behind the scenes. Too often we as a society judge celebrities by what we perceive they don’t do, but Yoba is an example of a celebrity who underneath it all aims to use his talent for the betterment of others.

He does it with little to no fanfare, and that’s exactly how it should be. Paradox is in theaters as well as  on VOD (Video On Demand) and iTunes now, so make sure you go check it out in a theater near you and support an artist who’s using his time and talents to help many others.