Titan Publishing is excited to announce Marvel Studios: The First Ten Years – a fantastic behind-the-scenes collectors edition celebrating the first 10 years of Marvel Studios movies from Iron Man to Ant-Man and the Wasp.In 2008, Tony Stark made his first Iron Man suit. Shortly after, Nick Fury told Stark that he had “become part of a bigger universe…” In the years since then, amazing new places – like Wakanda – have been discovered, the Avengers have assembled, the Guardians of the Galaxy have formed, and old friends have fought a Civil War.

During this time, the hunt for all six Infinity Stones has continued. Now, all the worlds, all the characters, and all the Stones have finally come together, culminating 10 years of groundbreaking storytelling.

Featuring stunning photography and in-depth sections on each film, including a guide to each movie’s Easter Eggs and end-credits scenes, Marvel Studios: The First Ten Years looks back over the rich history behind the Marvel Cinematic Universe.

Marvel Studios The First Ten Years is available in hardback from November 13 and magazine edition from October 30.

Available at comic shops and all good bookstores. Order online at Amazon. 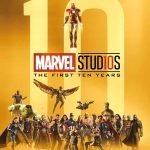 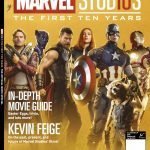