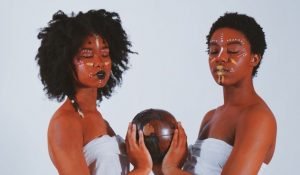 Afrofuturism uses aspects of African and African American culture, science fiction, and fantasy to critique and reimagine the past, present, and the future. Two upcoming musicians that have Afrofuturistic elements in their work are Thandiwe and Niambi Sala, known collectively as OSHUN. Their hip-hop/soul work features socially conscious lyrics as well as heavy references to the Yoruba gods and goddesses known as the Orisha, particularly the goddesses Oshun and Yemaya.

One of their earliest music videos and songs, “Gyenyame”, feature the duo singing as Oshun and Yemaya. According to the website God Checker, Oshun is the goddess of sweet waters, love, creativity, and sensuality and is known as the protector of the river. She is also associated with her signature flowing yellow garments and her romantic connection to the Orisha thunder god Shango. Yemaya, on the other hand, is known as the “mother of the water” and is associated with childbirth, the ocean, and her flowing blue garments.

Gyenyame is a Ghanaian word that means “except for God” and represents the supremacy of a god or gods. In OSHUN’s song, the duo sings how they believe that the Orishas and the goddesses Oshun and Yemaya are supreme. The Orisha are one facet of African spirituality and roots, but they have always been with us. The music video furthers this message by depicting the goddeses Oshun and Yemaya making two black men fall in love with them and teaching them their spiritual ways.

Oshun’s most recent project is the free mixtape ASASE YAA, which was released in 2015. The blog Journey To The 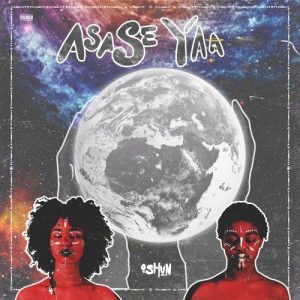 Goddess states that Asase Yaa is a West African goddess known as “old woman of the earth”.  Themes associated with her are death, truth, mortality, fertility, and the harvest. The mixtape ASASE YAA channels the spirit of this goddess as well as the goddesses Oshun and Yemaya to discuss the trials and tribulations of black women.

After “The Next Day” comes the track “I Wake Up/Stay Woke”, which has the black woman becoming aware of the socio-political forces that affect her existence and using that knowledge to nurture her spirit. The music video for “Stay Woke” demonstrates this well. At the beginning of the video, the duo OSHUN uses the image of the minstrel to code a warning to their audience that says how certain institutions will try and steal their true potential and replace them with stereotypes.. Then, Thandiwe and Niambi play two girls who embody the “rachet” stereotype. They walk around and meet other stereotypes, such as “The Angry Black Woman” and “The Suspicious Black Boy”. After being overwhelmed by these images, they jump into the ocean and cleanse themselves of the stereotypes they embody.

While on her spiritual journey, the black woman engages in romantic and sexual pursuits in the tracks, “His (Honey)/Oxum”, “Sango” and “F*vk”. In these tracks, she loves and loses, but she learns to pick herself up and keep searching for a man who will respect and appreciate her. Out of these tracks, the track “Sango” is the most interesting because it suggests that the black woman is harnessing the sensuality and beauty of Oshun while pursuing a man. 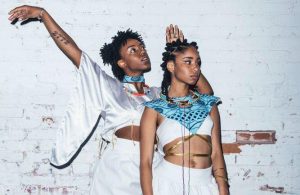 One track that sums up the central message of the mixtape is “Protect Yourself” which features the male rapper Proda. While the track by itself has the black woman using her newfound knowledge to protect her “head, heart, and soul”, the accompanying music video applies this to black people in general.  In the music video, Thandie and Niambi play two futuristic spiritual guides dressed in all white and Proda plays a young man in need of guidance.

The music video shows a young man who is at a crossroads in his life. Two futuristic spiritual guides tell him that he can either be a part of a higher purpose or a superficial one. The superficial life is represented by young people doing things such as taking selfies, endlessly stuffing themselves with junk food, and caring only material things. At first, the young man feels overwhelmed and tries to run from making a choice, but then he realizes that by becoming part of a higher purpose, he can help others do the same. Together, he and the spiritual guides help others join them by firing guns that cleanse them of their superficial attachments.

The remaining tracks on the mixtape, including “Gods”, “2MINOFH8”, “Ye”, and “Brown”, involve the black woman continuing her spiritual journey by recognizing and nurturing her blessings and expelling negativity. By the end of the mixtape, she has used the waters of the goddesses Oshun and Yemaya to nurture the fertile soil of her soul that is represented by Asase Yaa. She has found the freedom she has yearned for by reconnecting with her roots and herself, becoming a powerful, wise woman who is proud of who is.

All and all, the music duo OSHUN are a powerful force to be reckoned with. By fusing Yoruba religion and culture with hip-hop soul to discuss socio-political issues and relationships, they use the past and present to pave the way for a better future.