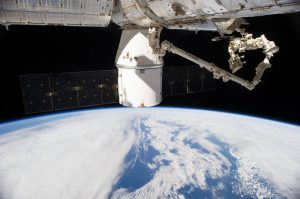 A SpaceX Dragon loaded with about 4,800 pounds of research, hardware and crew supplies bound for the International Space Station is targeted to launch on a Falcon 9 rocket from Cape Canaveral Air Force Station in Florida no earlier than 11:46 a.m. EST, Dec. 12.
Credits: NASA

Packed with almost 4,800 pounds of research, crew supplies and hardware, the SpaceX Dragon spacecraft will launch on a Falcon 9 rocket from Space Launch Complex 40 at Cape Canaveral Air Force Station in Florida.

About 10 minutes after launch on Dec. 12, Dragon will reach its preliminary orbit and deploy its solar arrays. A carefully choreographed series of thruster firings are scheduled to bring the spacecraft to rendezvous with the space station. NASA astronauts Mark Vande Hei and Joe Acaba will capture Dragon using the space station’s robotic arm. Ground controllers will then send commands to robotically install the spacecraft on the station’s Harmony module.

The Dragon spacecraft will spend approximately one month attached to the space station, returning to Earth on Jan. 13 with results of previous experiments